James Vince has been a very unlucky Test batsman, but one who can yet crack the big time. CricViz analyst Ben Jones explains why.

The decision to recall James Vince to England’s Test side has raised a fair few eyebrows. The elegant right-hander has rarely appeared out of form in an England shirt, but he’s never managed to fully convince on the scorecard. A fundamental weakness (so the argument goes) sees him caught behind far too regularly for a Test batsman, edging to the slips or the keeper. It is true that Vince does often get out in this way – 13 of his 22 Test dismissals have been caught behind off the seamers.

Many critics put that down to a flaw in Vince’s technique, whereby he is not fully in control when driving the ball. However, there is a substantial argument that Vince’s record of being caught in the slips so frequently is in fact the result of extremely bad luck.

There are numerous potential explanations for this. Some might say that Vince goes harder at the ball than most players, and so edges are more likely to carry. Others might suggest, in a similar vein, that driving as often as Vince does encourages the fielding captain to pack the cordon, meaning edges are less likely to go through gaps or pass the slips altogether. Both of these theories have their merits, but a third is possibly the true conclusion; again, that luck is a huge contributing factor. Because far more so than any other England player in recent times, when Vince isn’t in control of a shot, he’s likely to edge the ball rather than to play-and-miss. 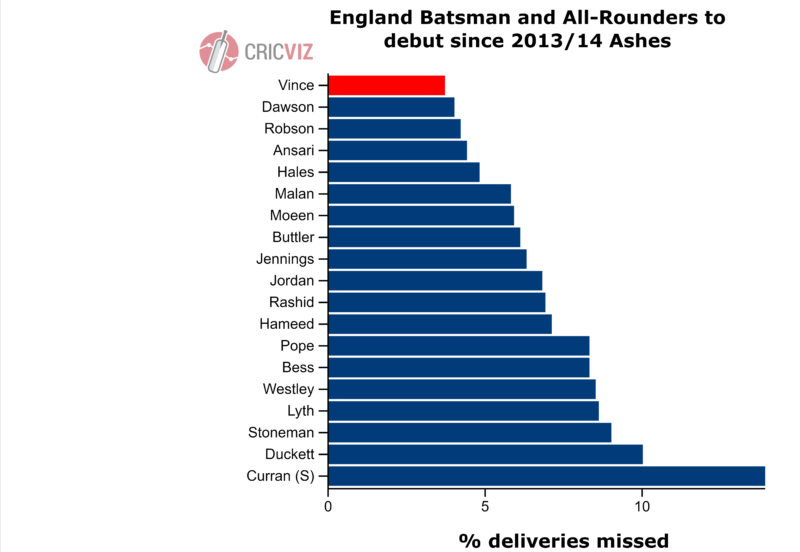 Indeed, Vince’s play-and-miss record compares favourably not only with his teammates, but with all players in Test cricket. Since Vince made his debut in May 2016, only 11 players have missed the ball less than him. 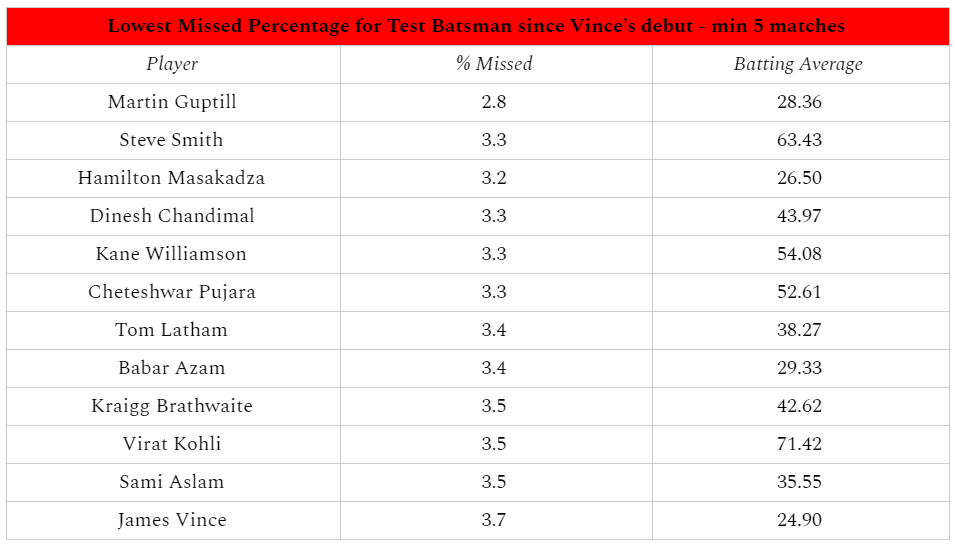 However, when we look at those players and how often they edge the ball, rather than play-and-miss, Vince is lodged firmly in the middle of the pack. 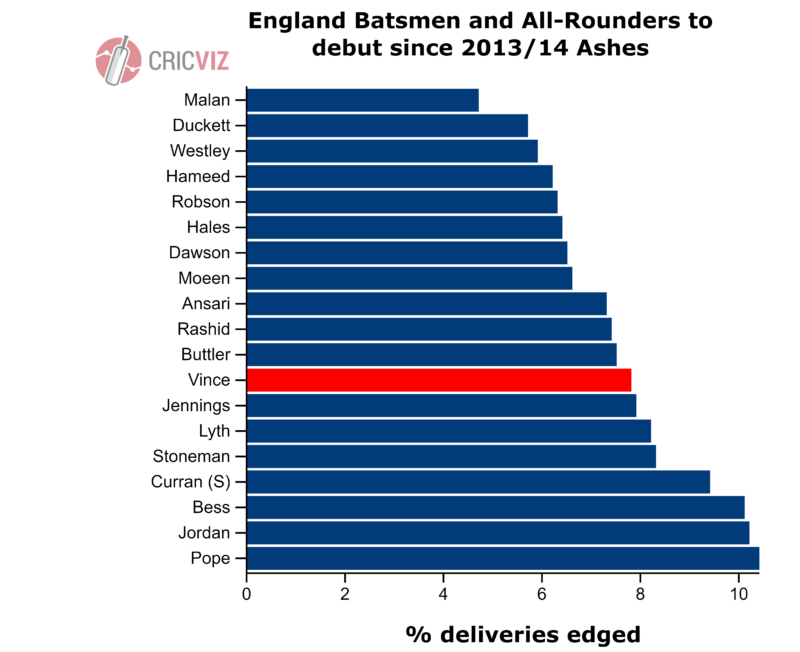 This illustrates Vince’s misfortune; put simply, if he plays a false shot, it’s more likely to be an edge than a miss, a fate not experienced by all. In Tests, an edge is as likely as a miss, and Vince’s imbalance in this regard is the most obvious reason for why his false shots lead to more wickets than the average.

Equally, it’s not just that crop of incoming, less experienced England batsmen, that Vince has out-performed in terms of playing-and-missing; of those to play five matches in this era, no player misses the ball less than Vince. 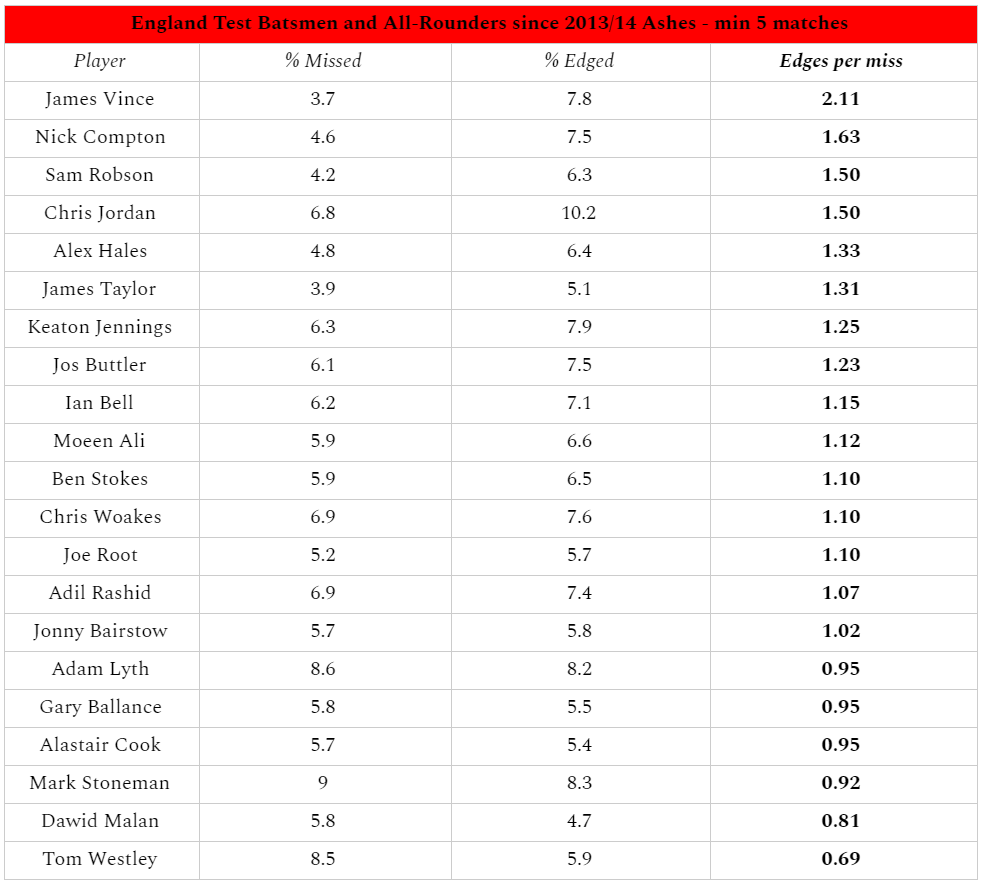 However, that column to the right is the true indicator of Vince’s bad luck. His ratio of edges to misses is higher than anyone to appear regularly in an England shirt in recent times. However, here is the killer point; of the 88 players in world cricket to bat 20+ times in Tests since Vince debuted, no player has a higher ratio of edges to misses than Vince. Not a single one. 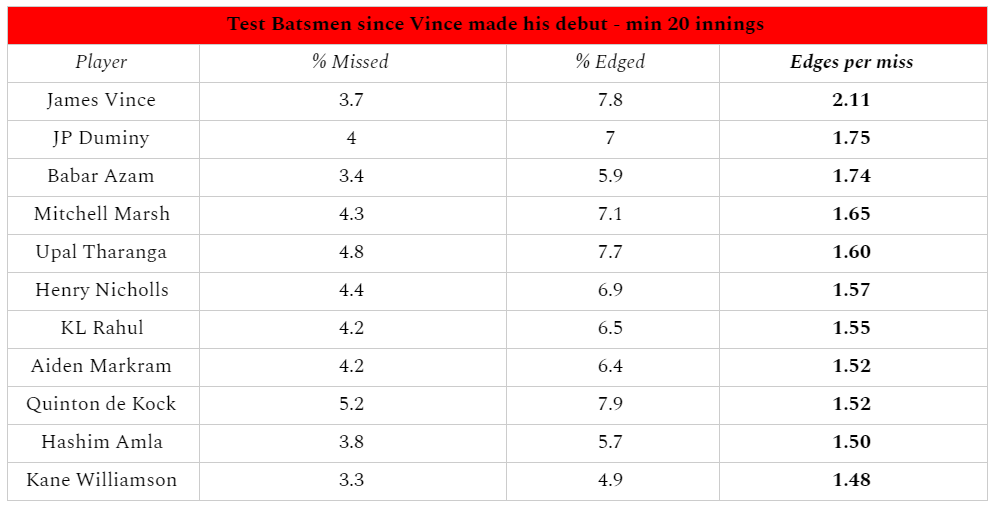 More so than any established player in Test cricket over the past two years, Vince has been more likely to edge the ball than to play-and-miss. By this measure, he is the unluckiest batsman in the world.

And whilst the idea of luck always evening out is a slightly flawed one, it has its basis in truth. The ratio isn’t going to reverse itself in Vince’s next 13 Tests – should he last that long – but it could regress closer to the 1:1 average which we see in Test cricket overall. Given that 40% of Vince’s Test runs have come in front of square on the off-side, it’s wiser for him to trust regression to the mean than to put away the drive.

Putting aside Vince’s relationship with luck, there is clear evidence that he has improved in the manner Ed Smith told him to, following the winter tours. Vince was told to go away and dominate in county cricket, and he has. In 2018, Vince has made 18.29% of Hampshire’s County Championship in the games he’s played. In the previous three seasons, that figure was 11.49%. He is also bending individual games to his will; only three times in his career has Vince scored more than 30% of his team’s runs in a Championship match, but two of them have come in 2018.

More so than any established player in Test cricket over the past two years, Vince has been more likely to edge the ball than to play-and-miss. By this measure, he is the unluckiest batsman in the world

With this in mind, Vince is an excellent call from England’s selection panel. If Vince can manage to arrest this unfortunate slump, to cling onto his place long enough that the tide starts to change, then England have got one hell of a player on their hands. Away from the pressure of his battle with the edge of his bat, Vince is a quietly excellent player of spin. Considering that of the five spinners he’s faced in Test cricket, three are Rangana Herath, Nathan Lyon and Yasir Shah, his average of 58.66 against slow bowling is elite. Few players in consideration for the tour of Sri Lanka have better numbers against the bowling that England will be facing most. Aside from his batting, Vince is a strong fielder; indeed, England’s own Fielding Ability tool rates Vince as the sixth best fielder to appear for England since the start of 2015, of those to play in five matches. Given England’s relatively poor fielding performances this summer, his arrival in the side could be a welcome boost, albeit effectively in place of Jos Buttler, a strong fielder himself. Vince contributes a lot to the side.

However, the underlying point here is that it is important to give talented players enough chances to succeed. After all, the man Vince could be replacing, Jonny Bairstow, is now seen as an immovable presence in the English middle-order, but he didn’t make a century until his 22nd Test, and averaged less than 30 up to that point. For all sorts of reasons, luck included, talented players don’t always crack the top level on the first few tries. Those who want Vince to succeed will be hoping that for him, it’s fourth time lucky.