The headline stories from week one of the T20 Blast as picked out by CricViz analyst Freddie Wilde.

As the T20 Blast season got underway England were playing a T20 series with India that highlighted how many top-order options England have with Jos Buttler, Alex Hales, Jason Roy and Jonny Bairstow all playing in the same team. However, the opening round of the T20 Blast served as a reminder that England’s top-order depth extends well beyond the international team. In Week One the likes of Ben Duckett (194 runs), Liam Livingstone (137 runs), Sam Hain (121 runs), Joe Denly (111 runs), Adam Lyth (92 runs) and Joe Clarke (88 runs) all impressed. Excellent batting pitches in the last few years of the Blast have helped batsmen but the league is producing some consistently quick scoring top-order players. 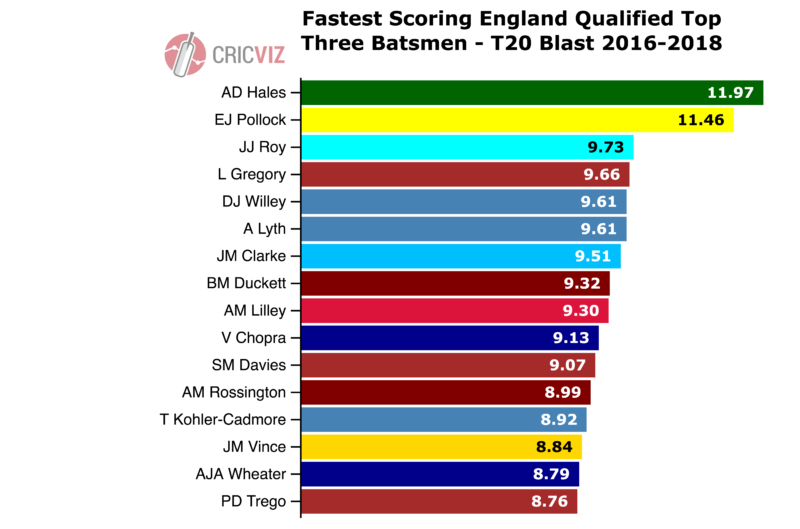 Worcestershire are the early pace-setters in the North Group with three wins from three matches. With a top six of Martin Guptill, Joe Clarke, Callum Ferguson (who will now be replaced by Travis Head), Ben Cox, Ross Whiteley and Brett D’Oliveira – which will later be boosted by the return of Moeen Ali – Worcestershire are unlikely to be short of runs; how well their very inexperienced bowling attack copes without Jack Shantry (retired), Joe Leach (injured) and Josh Tongue (injured) is going to be key. So far they’ve pulled through impressively – Worcester’s strike rate of 15.6 is the second best in the competition and all seven of their bowlers have taken at least two wickets.

46% of Lancashire’s overs have been bowled by spinners – the highest proportion in the competition so far. In Lancashire’s win against Northamptonshire, they exploited a used pitch and bowled 13 overs of spin (Liam Livingstone, Matt Parkinson, Stephen Parry and Arron Lilley), restricting Northants to 123 for 9 from their 20 overs. 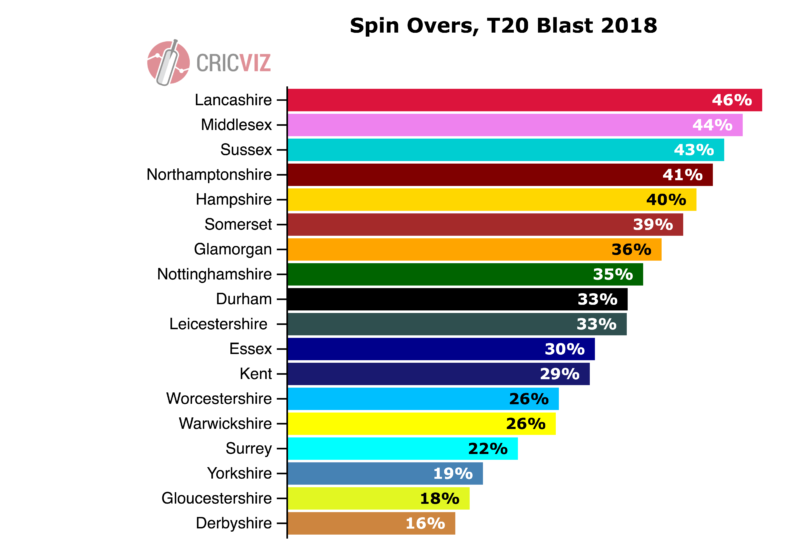 Warwickshire’s left-handed opener Ed Pollock, just 23 years old, has had a phenomenal start to his T20 career, scoring runs at 11.46 RPO. On Sunday Pollock scored 26 off his first six balls, helping to take 33 from the first over of the innings – the highest total ever scored in the first over of a T20 match. In a wonderful illustration of how England’s white ball batting has been transformed in recent years, after nine balls Pollock had scored 33 and his opening partner Ian Bell had scored two. 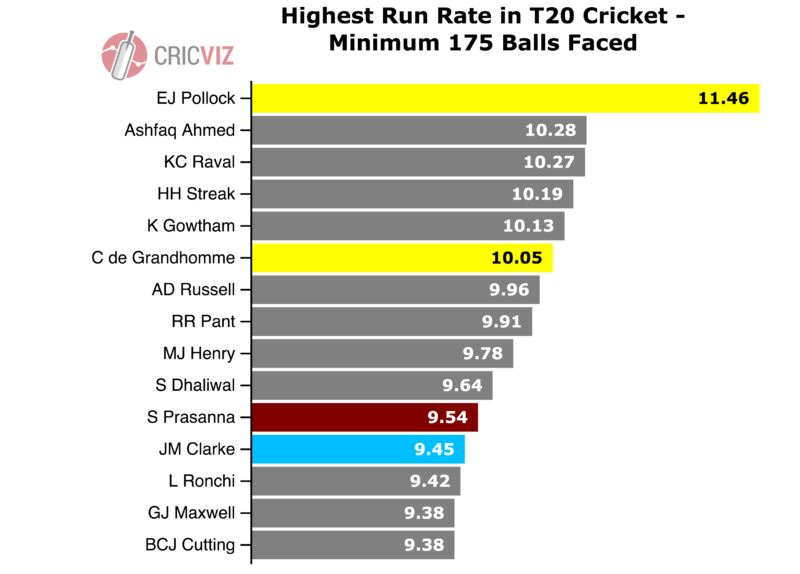 Northamptonshire have won two of the last five T20 Blast competitions but they have started terribly this year. After Leicestershire’s heist on the opening night they were plundered for 219 again by Nottinghamshire before being choked by Lancashire’s spin-strategy in Manchester. Northants’ economy rate of 9.95 RPO is the worst in the league. 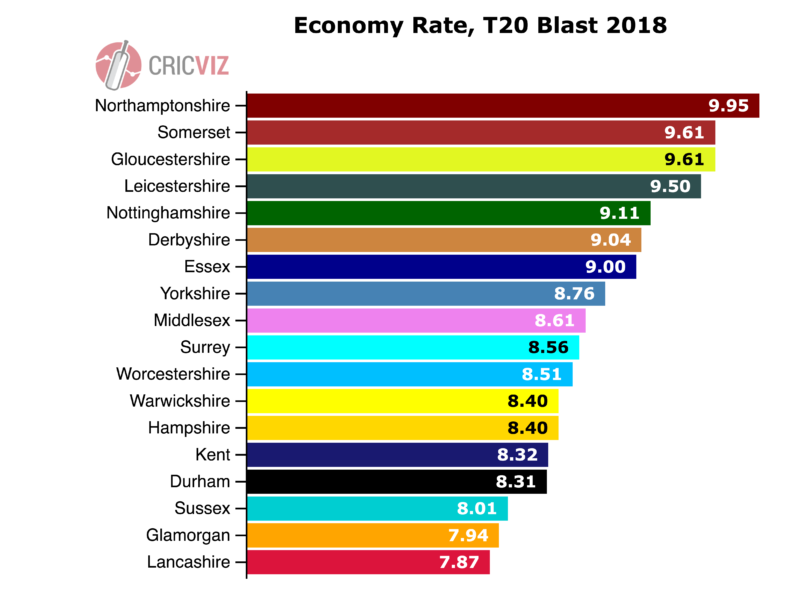 Northants may be struggling but their star batsman Duckett has had a superb start to the season, registering his highest T20 score of 96 before scoring 88 and 10 to end the round top of the run-charts. 50% of Duckett’s runs have come behind square – with 48 coming off 13 sweeps and reverse sweeps. 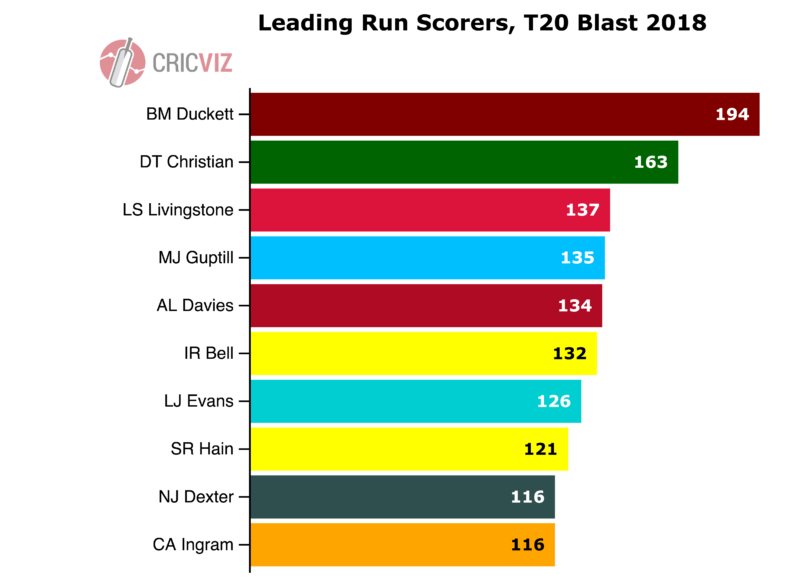 Only two of seven teams have won after electing to bat first – Kent did it against Surrey and Sussex did it against Essex. Expect winning the toss and batting to be something that Sussex do fairly often this season. Their head coach Jason Gillespie favoured the strategy in the 2017/18 BBL with Adelaide Strikers – electing to bat first on all six occasions when they won the toss. Like with the Strikers Gillespie has strong bowling attack at Sussex – including Rashid Khan – at his disposal. Sussex are joint top of the South Group with Kent after winning both their opening matches.

Glamorgan’s thumping 63-run victory against Hampshire was their biggest T20 win ever in terms of runs. Glamorgan scored 168 after being asked to bat before bowling Hampshire out for 105. Hampshire’s Powerplay total of 26 for 4 is their second worst six over score ever.

Team of the week