Only in cricket can the act of doing basically nothing get to feel so dangerous and cool. Wisden Cricket Monthly’s editor-in-chief Phil Walker brings you the most evocative, vulnerable and downright thrilling exponents of the non-shot – cricket’s best leaves and leavers.

Robin Smith. Goggle-eyed, shadow batting through the gears, bobbing and weaving like an unbeaten middleweight, offering out the quickest they’ve got and all before he’s faced a ball. The Judge liked getting hit, it got him going. At Barbados in 1990 Walsh went after him. Smith was hit in the face, his jaw busted. The next ball, the last before tea, is another headbanger. Smith jackrabbits backwards, bent double on his haunches, before tucking his bat away and giving Walsh the thumbs up. Even his trademark leave was dramatic, involving the dominant top hand wresting the blade from the bottom hand in the heroic last-ditch act of yanking it out of the road.

The leave alone. An art. Who and what you are. Gower’s leave, as with his game, an extension of himself. There he’d stay, leg-side, leftfield, those blue-stockinged feet languidly non-committal, the ball a weekend rendezvous to be ushered goodbye with a shrug on the platform. But there was poignancy, too, in Goldenhare’s story; twice in a Test match against Pakistan he left alone a moment too late, both times disturbing his stumps from the inside edge. And in his final ever Test innings, the leave betrayed him one last time, Waqar pickpocketing his off-bail with barely a soul noticing what had happened… even in death there was grace. 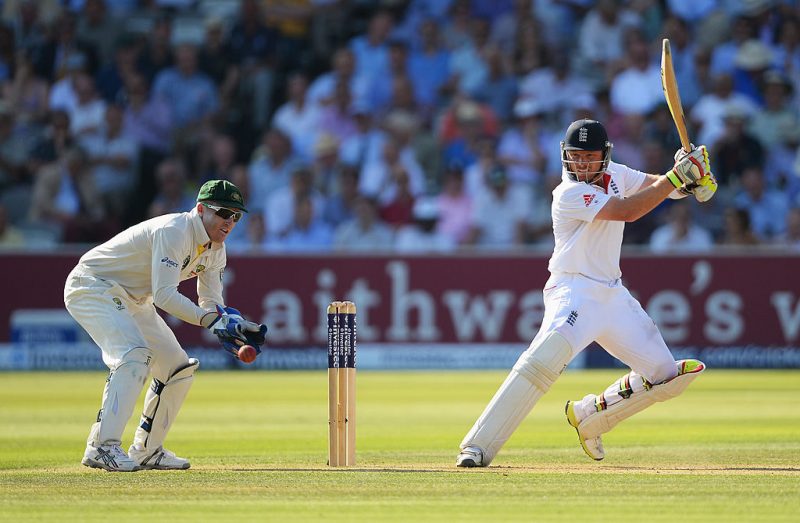 The Duke sees it early. Conceives the shot in his beautiful red mind. It’s wide, down that corridor where he used to prod. It’s there to cut, just behind point. Crouches into position. Prepares for execution. But experience speaks. Taught him much. He lets it go past, watching it go tracing its path all the way to the keeper, like a trainspotter marking a passing locomotive. Releasing himself from the pose a few seconds later, he plays that cut shot, dabbing down on thin air. I could’ve, he says. If I’d wanted to. Next time, next time. 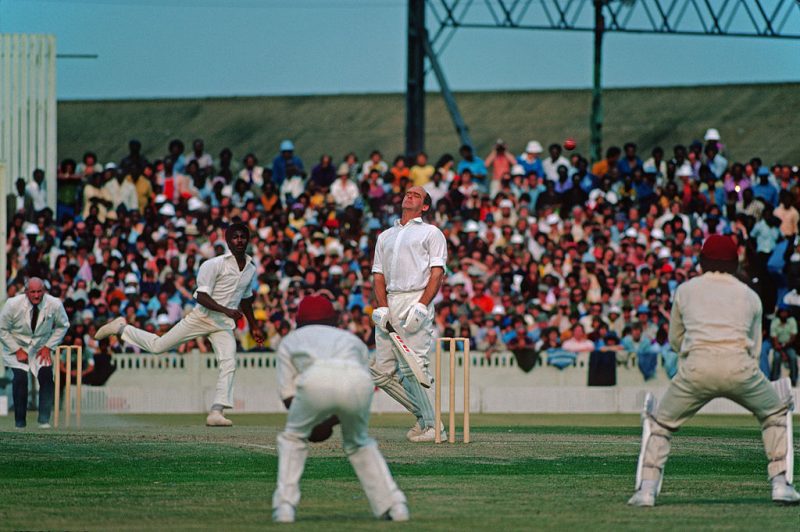 More of a ‘go to’ than a ‘leave alone’, but then that was Brian Close: balding, forty-something and helmetless, recalled to face the Babylonian fire of Holding and Roberts in ’76, and wearing them time after time flush on the chest. The only surprise was that he didn’t trap it and volley it on the bounce straight back from whence it came. 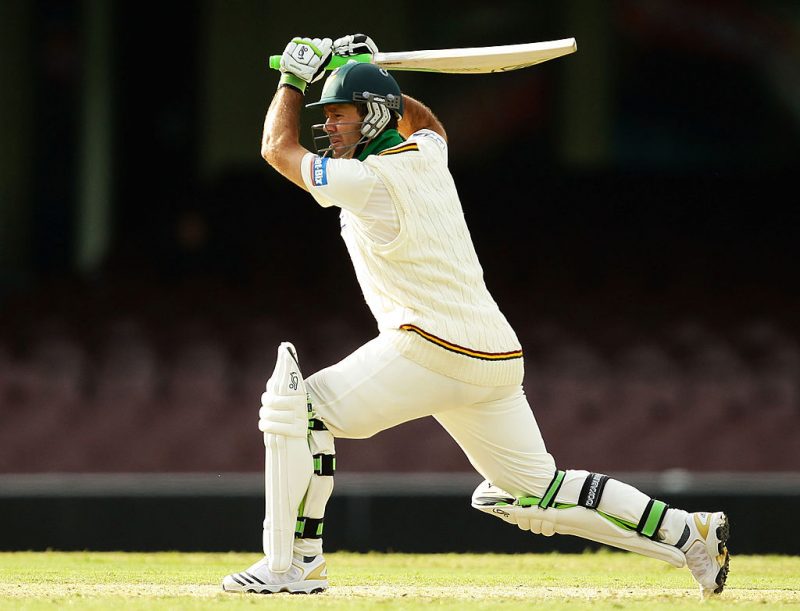 Throughout the last decade, nothing said “580-4dec” quite like the Punter mega-lunge on a crisp Australian morning. England will have just nipped out one of the lefties (they can’t both smash it every time) to be met by No.3 sashaying across the turf. Get him early, lads; get him early. The first ball is a pearler: up there, seaming, rising steeply. Early. And he’s seen it, and the front foot’s advancing, and it keeps on coming, hamstrings in peril, and he’s low, weight bent over front knee (on guard!) and the arms are up in supplication, and the hands are clasped high above the head, a world champion in laurels, and the ball’s an irrelevance now, a piffling pie, and though he’s not yet played a shot, you know, you just know, how many there are to come.

The leave as respectful nod to gentlemanly manners. Unshowy, technically clever and totally in keeping with the man. Not so much a leave as a deliberate play and miss, Trescothick, a leftie, figured that by playing inside the line of the angled delivery and refusing to follow it, he eliminated the chances of being bowled or nicking off, all the while dangling the false hope of a moral victory to the gently steaming bowler. Canny.

Everything with Kev is done for effect. He has two leaves, both very much him. For the first example, refer back to Ponting’s power-drunk lunge; for the second, imagine a man using his bat to imitate a windscreen wiper by pulling his evading hands across his body. It’s broadly unnecessary but noteworthy nonetheless; and that’s Pietersen for you. It implies to the bowler and his adoring millions that he’s undertaken full analysis of every miniscule variance of the delivery in question, considering its potency, weighing his chances, pondering the morsel, before finally, cutely, pulling out with absolute conviction. It could be saying: Well bowled! It’s actually saying: I’ll have you. 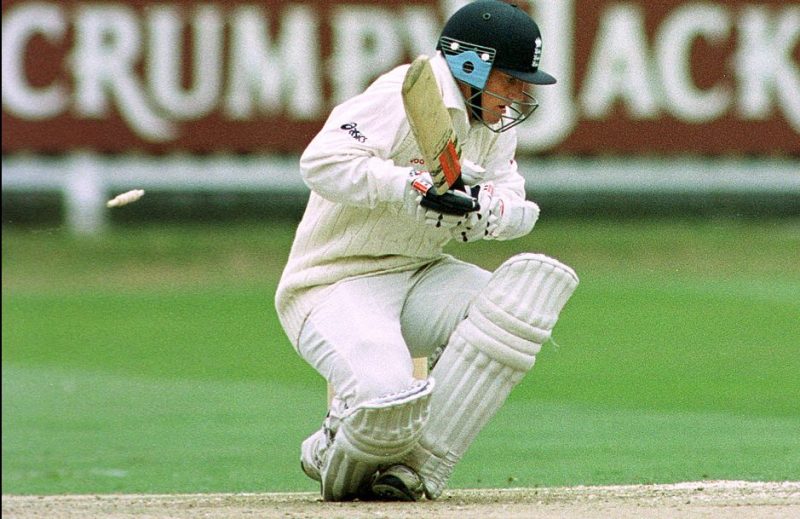 Chris Read ducks a slower ball and gets bowled

Plenty have done it. It’s not uncommon to misread the slower ball and get duped into thinking it’s a beamer when in fact it’s a floaty bomb destined for the bootlaces. But few could ever have looked so startled, so bewildered, so utterly lost, as Chris Read did in just his second Test innings. It was 1999. England were the wrong side of ordinary. Chris Cairns was in his pomp. The boy was on nought at Lord’s when a looping bundle of deceit dropped out of the air and through Read’s legs as he cowered for cover. The outstretched arms that followed and incredulous look on his face were almost too sad for words. Not that there was much sympathy going round at the time. Only when Graham Thorpe did the same thing against a Courtney Walsh slowie a year later did Read get to breathe again.

Talking of which, the Richard Pryor of tailenders was without doubt the funniest batsman to ever play the game. With exaggerated swagger in direct inversion of his own electrifying crapness, here was a strutting octopus of a No.11, all bulging eyes, alien hand syndrome and inexplicable legs, topped off with a hammy leave-alone that in one motion somehow evoked an adulterous businessman briskly walking down the garden path, head in the air, folding his newspaper-bat primly under his arm as he goes. Nothing to see here, old boy! Now get back to your mark.

Every Englishman’s favourite leave belongs of course to Michael Clarke. Yep, it’s 2005 again, and the peroxide hedgehog’s epic refusal to recognise Simon Jones’ banana ball. Technically, the leave was flawless: perfect transference of weight, high hands, head down, full stride out to the ball. Obligingly, Clarke held the pose for an hour or so afterwards, every ticking second accentuating the technical perfection of the non-shot. And that takes class. Real class.