Another round of Sheffield Shield action means it’s time for Wisden’s team of the week.

Queensland’s visit to the MCG was undoubtedly the highlight of the round, with the visitors securing a 59-run win with just seven balls left to play.

New South Wales’ bowling attack – that potent Australia quartet of Starc, Lyon, Cummins and Hazlewood, joined by Steve O’Keefe – proved too much for Western Australia at the SCG, with the hosts easing to a 223-run victory.

A run-fest took place at the Adelaide Oval, with three declarations taking place to set up a nervy finish. Tasmania held on for the draw with two wickets left in the bank to deny South Australia victory. So, who makes the cut for Wisden’s Sheffield Shield team of the week?

A breakthrough match for the 22-year-old, who hit his maiden first-class ton in the first innings. In a 293-run opening stand with Jake Weatherald, Hunt contributed 132 from 249 balls, and he wasn’t done there. With South Australia looking to set a target for Tasmania, Hunt emerged to hit a 70-ball 69 in the second innings. 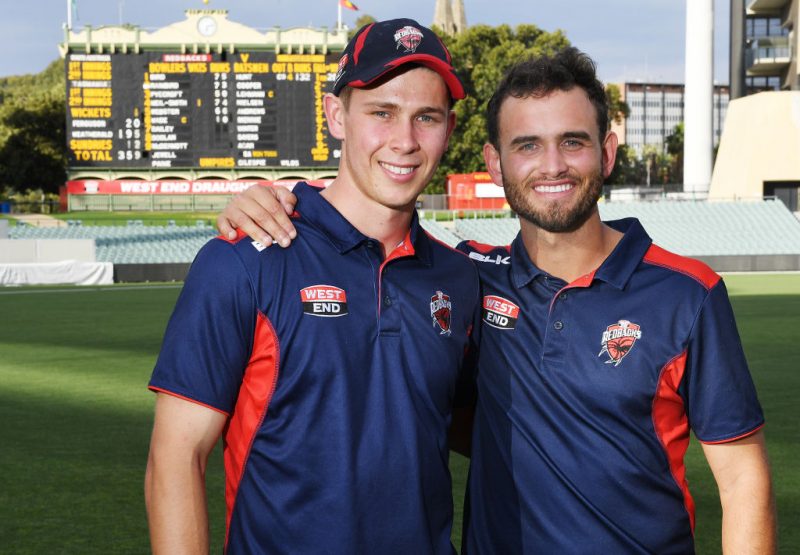 Hunt and Weatherald after their day one heroics

Weatherald has to accompany Hunt at the top of the order after racking up the highest score of the round. He fell two runs short of a maiden first-class double century in the first innings but ran Tasmania’s attack into the ground as he batted through the entirety of the first day. Having put up just one run on the board in his appearance against New South Wales in the last round, a first-class best must have been a welcome boost of confidence. A notable mention should go to Daniel Hughes, who misses out after hitting a pair of half-centuries for New South Wales, but you have to reward the tons.

Yes, he opened. But Doolan was a shoo-in after hitting twin centuries. The 33-year-old – who scored 89 on Test debut against South Africa over five years ago – opened his account with an unbeaten 170, biding his time at the crease with a 403-ball stay. In his second dig he picked up the pace with a 201-ball 116, meaning he batted for over 600 deliveries across the match. A mighty effort.

Death, taxes and, yep, we know how it goes. Smith went out to the middle and took his time but made sure to chalk up first-class ton No.42. It was a patient affair, with his 295 balls resulting in 103 runs, an innings of stark contrast to his barnstorming 80 not out against Pakistan last week. Different gear, still speeding. 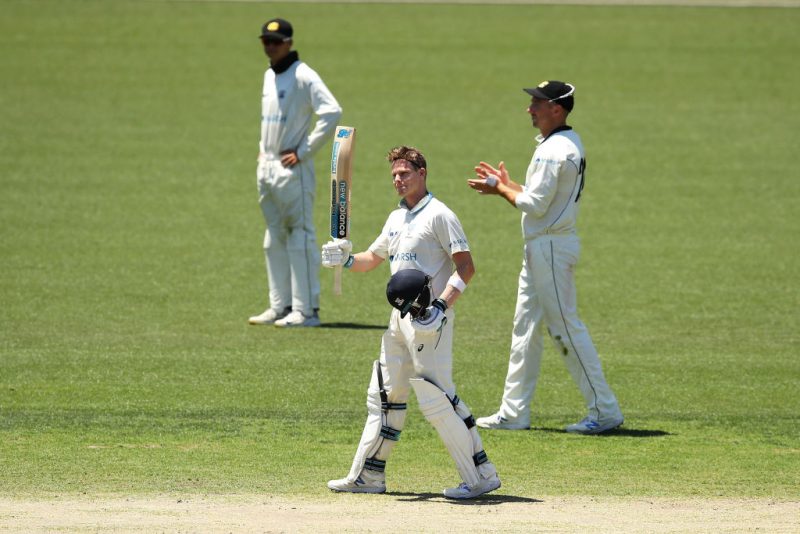 Smith raises his bat for his 42nd first-class century

Henriques shared a 141-run stand with Smith and was, in fact, the more dominant force. His 116-ball 91 featured 12 fours and two sixes, and with New South Wales pushing for a declaration in their second innings, he was promoted to accompany Hughes at the top of the order. A 54-ball 42* meant it was the right call.

Peirson earns his selection as the side’s wicketkeeper-batsman on the back of a vital half-century in Queensland’s second innings to give them some runs to play with, after Victoria had taken a lead of 117 at the conclusion of their first innings. He arrived at the crease with his side six down and with a lead of just 61. He walked off at the end of the innings unbeaten and with Victoria needing 190. A job well done.

The whole world knows what Cummins can do with the ball, and he’s not too bad with the bat either. While he picked up four wickets in the win over Western Australia, Cummins also hit a half-century at No.7 in New South Wales’ first innings. He certainly merits a go at No.7 in this side, too.

While Cummins and Josh Hazlewood are formidable, are they really as mesmerising as Starc in full flow? When that slingshot of a left arm lets rip, there are few better sights in world cricket. He carved Western Australia open during their chase, taking 4-57, his pace just too much to deal with.

Named in Australia’s squad for their Test series against Pakistan, it seems it’ll be a battle between Pattinson and Starc to see who accompanies the pair of Hazlewood and Cummins. Pattinson, no stranger to injury, is a bowler of great heart, and he showed that against Queensland by running in for 48 overs to return six wickets. It seems a shame that either one of him or Starc will probably be running drinks during the first Test against Pakistan.

Related Story: Sheffield Shield team of the week – round six

Steketee proved a vital contributor with both bat and ball in Queensland’s victory. His 33 was the second-highest score in their first-innings total of 183, and his second first-class half-century arrived in the second innings as he and Peirson pulled off the rescue job. The right-arm seamer didn’t disappoint in his primary vocation either, taking four wickets in the match.

An easy pick to round it up. Queensland’s Swepson took a hat-trick – all three deliveries were adjudged to be lbw – in Victoria’s first innings, although his dismissal of Pattinson certainly looked questionable, with the ball spinning sharply to the leg side. Nevertheless, Swepson accomplished a rare feat and he stepped up again on day four with three wickets, including the one to seal the match.