Harmanpreet Kaur, captain of the India Women Twenty20 side, believes Smriti Mandhana’s exceptional performance in the Women’s Cricket Super League – 421 runs in nine innings – is because of the freedom given to her at Western Storm.

“Smriti is someone in the Indian side I discuss a lot of cricket with. When I met her in the UK, she said her team had given her the freedom to swing her bat. And it was clear she was enjoying herself,” said Kaur in an interview with ESPNcricinfo.

“We both played in the WBBL and now the KSL, so that experience is there. We’ve come to know each other quite well that way, and the output of my discussions with Smriti has mostly been that she likes being given freedom.”

Thank You England for having me for the KIA Super League, It has been a pleasure to represent Western Storm. Special thanks to supporting staff for providing me environment where I was able to learn and grow as a player. All the best for the finals !!😇 pic.twitter.com/Q2xuVNIlWa

Mandhana scored her maiden century in T20 cricket against Kaur’s side, when Western Storm took on Lancashire Thunder at Old Trafford in Manchester.

“That was one of the best innings I’ve seen her play,” Kaur said. “She was looking very confident; you could see that in her strokeplay. That’s what you need in a player: confidence and flow. And that comes, to a great extent, from that freedom,” said Kaur about Mandhana’s 61-ball 102.

“When you’re playing for the country, there’s a lot of pressure on you to deliver, game after game. You have to live up to the expectations that the tag of a ‘match-winner’ brings with it. But it works well for Smriti when she is assured of that freedom by the captain and the management.” 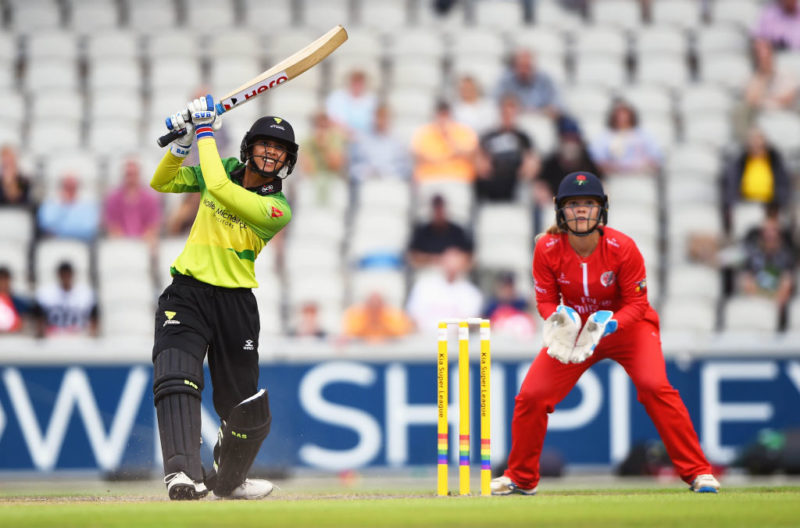 While Kaur is pleased with Mandhana’s incredible performance in the WCSL, she is hoping that the left-handed opening bat will hit the ground running against Sri Lanka next month. With the Women’s T20 World Cup in November, it is imperative for India to have their opener retain her golden form.

With Jhulan Goswami announcing her retirement from T20I cricket, the pressure of expectations will fall on the experienced shoulders of Kaur, Mandhana and Mithali Raj in the marquee tournament.

“She’s performed immensely well in the KSL, touchwood. And I hope she’s able to take that forward into the next series (in Sri Lanka) and then into the World T20. Whether it’s Smriti or me or someone else in the team – a batter or a bowler – individual performances only count when they contribute to the team’s victories,” said Kaur.