The third edition of the Women’s Big Bash League began in remarkably high-scoring fashion, with seven totals of 170+ and centuries from Australian youngster Ash Gardner (Sydney Sixers) and New Zealand’s Suzie Bates (Adelaide Strikers). The Sixers also managed to record the highest Women’s T20 total of all time as they racked up 242 thanks to Gardner’s 114 off just 52 balls and Ellyse Perry’s 91 off 49. From an English perspective, Nat Sciver starred in Perth Scorchers’ victory over Brisbane Heat as she compiled an assured 84 off 46 balls.

As we emerge into the 2018 bulk of fixtures, it is worth recapping on the latter stages of 2017 and the first few fixtures of the New Year. As things currently stand, Sydney Thunder sit at the top of the table, having only lost one fixture so far, with their counterparts, Sydney Sixers, placed second. There have been some memorable individual performances with both bat and ball, drastic batting collapses and some classic last-ball controversy along the way. 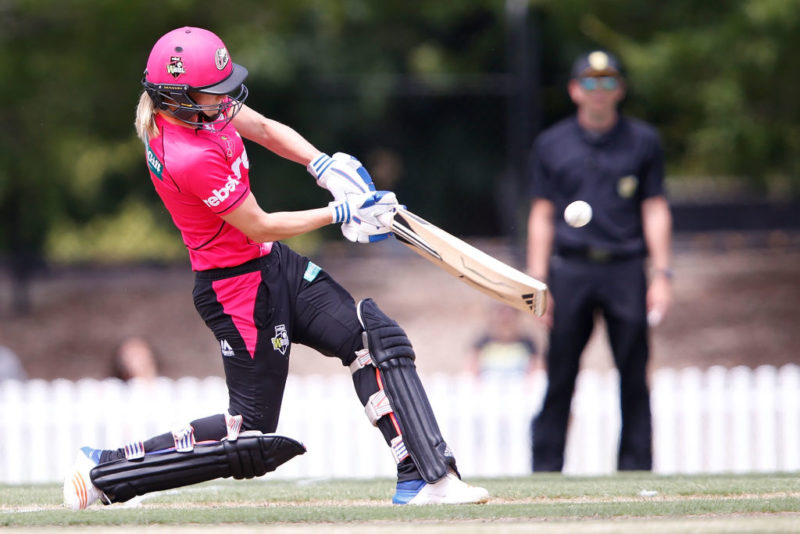 Ellyse Perry hits out for the Sydney Sixers

In the final round of fixtures before Christmas, Melbourne Renegades thrashed Brisbane Heat convincingly, as an impressive all-around bowling display skittled Heat for just 66. The one-sided affair was intensified as the Renegades completed their chase within 11 overs without losing a wicket. On the same day, Hobart Hurricanes suffered a collapse at the hands of the Sydney Sixers as they could only manage 98 all out. Ellyse Perry once again led the way to victory with an assured 41 not out as the Sixers completed a 9-wicket win.

The Boxing Day fixture between Perth Scorchers and Melbourne Stars was dominated by the Scorchers’ opening partnership of Elyse Villani and Nicole Bolton. Their 140-run stand completely overshadowed Lizelle Lee’s emphatic 76 in the Stars’ innings, and the fact that their 163-4 was their highest total of the season so far. Villani finished with an impressive 84 not out whilst Bolton was out for 67 to set up a convincing nine-wicket win. The two sides met again the next day, where the Stars secured their revenge with a strong bowling performance that restricted their opponents from chasing 149, despite another impressive knock of 72 from Villani.

😳 > INSANE! It doesn’t get much crazier than this!

Incredibly intelligent cricket from Sarah Aley on the final ball of our innings forces a SUPER OVER against @RenegadesWBBL! 🙈#smashemsixers pic.twitter.com/WG5ofYAMWF

Villani further demonstrated her class with a third successive half-century as the Scorchers managed to topple the Sixers. Perry also continued her fine form with an assured 45 for the Sixers, but their total of 138 wasn’t enough to faze Villani (63) and Bolton (42).

The Hurricanes’ winless season continued as they lost both of their fixtures to table-toppers Sydney Thunder in the final fixtures of 2017. They managed just 112-8 in the first fixture due to Stafanie Taylor’s 4-15, which Thunder comfortably chased down for the loss of three wickets. A New Year’s Eve collapse to 97 all out confirmed their second consecutive loss, with Samantha Bates taking 3-12.

Related Story: How are England players faring in the Big Bash League?

Sydney Sixers bounced back strongly to defeat the Renegades in the first fixture of 2018, having bowled them all out for 92, but it was their subsequent fixture which stole the New Year headlines. Renegades batted first, with captain Amy Satterthwaite top-scoring with 44, but the drama came in the final over as the Sixers required three to win from the final ball and two for a tie. Sarah Aley was on strike, and managed to scamper a single to short fine-leg. As wicketkeeper Emma Inglis discarded the ball and the Renegades began their celebrations, Aley sensed that the ball may still be live and called for a second run, which was completed thanks to a dive as Satterthwaite attempted a run out. After a lengthy discussion between the umpires, it was decided that the second run was legitimate and, therefore, a Super Over would be required to force a result. Thankfully for the Renegades, the misjudgement didn’t prove too costly as they comfortably chased Sixers’ Super Over target of 8 to secure victory.

The event naturally sparked plenty of debate regarding Aley’s actions, whether she had been brilliantly game-aware, or whether it wasn’t in the spirit of cricket. Regardless, it was a thrilling conclusion and demonstrated the exciting and exhilarating possibilities that the WBBL provides.