The fixtures schedule for the 2018 Women’s World T20 in the West Indies has been revealed.

The 10-team tournament will be played across three venues in the Caribbean from November 9 to 24.

All 23 matches of the ICC Women’s World Twenty20 2018 will be broadcast live and DRS will be used for the first time in men’s or women’s World T20s.

Defending champions the Windies are in Group A along with England, South Africa, Sri Lanka and Qualifier 1 from the Netherlands event, while Australia, India, New Zealand, Pakistan and Qualifier 2 will be in Group B.

Here is the schedule for the Women’s World T20, which starts with a triple-header in Guyana on 9 November! ?https://t.co/wb9e0MRNK5 #WT20 pic.twitter.com/M0fGIKcZQg

The event kicks off at the Guyana National Stadium, starting with India and New Zealand. In the second match, Australia will play Pakistan and the Windies round off the day playing Qualifier 1 under lights. This venue will also host matches between arch-rivals India and Pakistan on November 11 and trans-Transman adversaries Australia and New Zealand two days later. 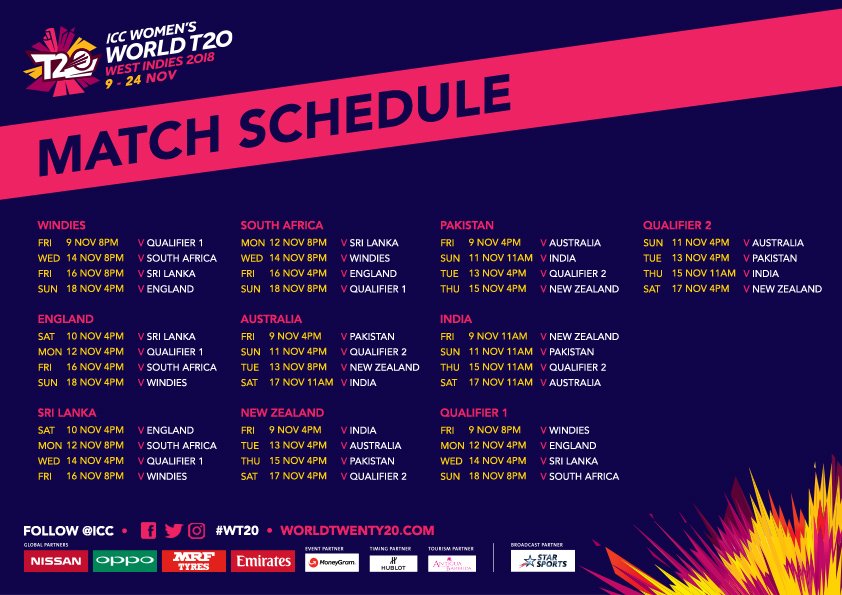