A club match was forced to a halt last weekend after the game was rudely interrupted by a parrot.

Hinckley Amateur Thirds and Hathern Old Seconds players had to momentarily pause play as the bird flew close to the ground, eventually landing on one of the fielders.

The parrot eventually rested on the shoulder of Hinckley fielder Tom Flannery. The bird was friendly throughout and at no point were players worried for their safety.

Hathern’s captain, Tim Davis, told the Leicester Mercury: “It was the first half and two of our players were out batting and the other team were fielding when we heard this loud squawking noise coming from the trees. We all looked around thinking, ‘What’s that?’

“This big macaw started flying round and round the ground really low before coming to rest on the shoulder of one of the Hinckley team, Tom Flannery, who looked a bit shocked. I don’t think he really appreciated it much, but what can you do?

“It just perched on his shoulder like he was Long John Silver or something,” he added. “It stayed there for a good two to three minutes while it was coaxed off him and we got a good photo. Luckily we were about ready to have a little break for a drink.

“Someone from the side came onto the field and took the bird off his shoulder and presumably it found its way home again. We carried on playing about five to 10 minutes later.”

Hinckley Amateur chairman Phil York said that the bird was safely returned to its owner who lives close to the ground.

York also told the Leicester Mercury: “I’ve seen the photo and it was a massive bird. It was from a house near to the ground. 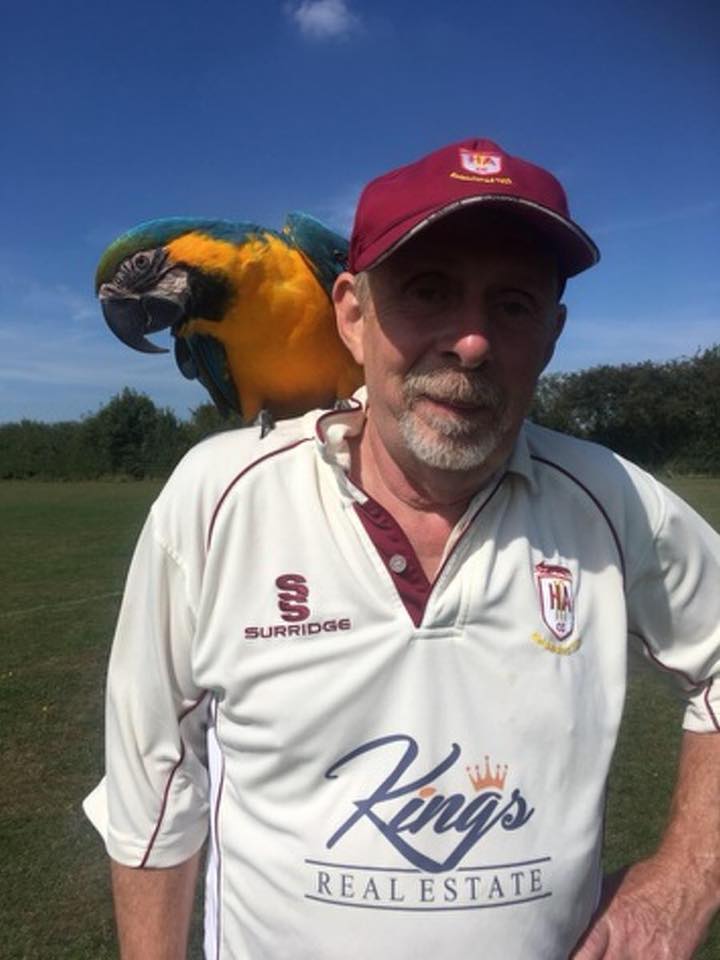 “Tom’s one our oldest players – aged 67 – and it seems to have just taken a shine to him. He doesn’t look much like a pirate – he has a bit of a beard but no eye-patch or wooden leg,” joked York.

“I’m told the people who own the bird came round and collected it so that the match could continue. The parrot was all any of the players were talking about after the match, though.”

Have you ever heard of a more bizarre reason for a game stopping?