The first week of the season has arrived and our skipper’s dreams of glory collide with the harsh realities of freezing weather and last-minute drop-outs.

FRIDAY: The eve of our first pre-season practice match: the height of optimism. I’m in my kit, bat oiling, stud tightening, ball polishing, shadow batting. The plans are set; opening bowlers, field maps and batting line-up sorted. The mind wanders to past and future glories. “Just the one pint for me, lads – got cricket tomorrow.”

MATCH-DAY: Twenty-two of us freezing our googlies off in a gentle knockaround. “Don’t you just love global warming,” some quipped two weeks ago while basking in early-April rays. They’ve got what they deserve: eight degrees, covers duty, five rain-breaks and 40 overs of praying the ball won’t be biffed their way. Is ‘cold stopped play’ a thing?

SUNDAY: Feeling surprisingly sprightly, though that’s more down to yesterday’s zero overs and a dogged 3 with the bat rather than any intensive pre-season fitness regime. 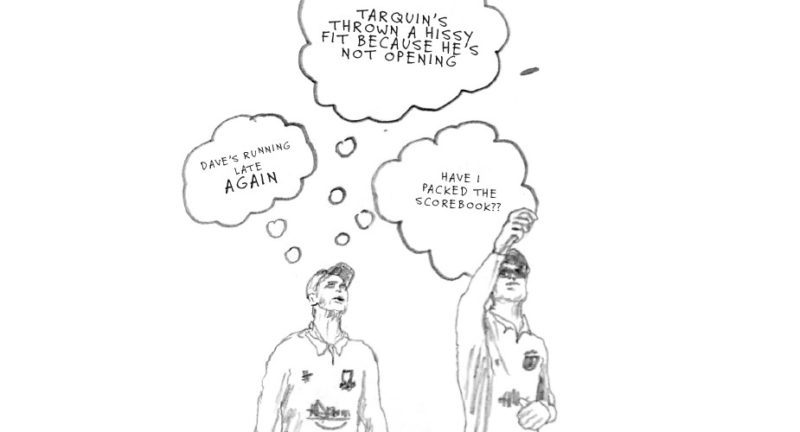 MONDAY: Shock! The first team have nailed down their playing XI for the first league game five days early – and they have full availability, which means the Second XI Dream Team I scribbled on my Notes app in December is coming to fruition. We’re going to be gunning for the title this year.

TUESDAY: I’ve got an embarrassment of riches – who the hell do I drop? I’ve always bemoaned a lack of quality and availability, but this is horrendous.

WEDNESDAY: Just about to post my team and break a heart when my No.8 batsman/part-time bowler pulls out. Result. He’s got engagement drinks – the same ones he insisted were dodgeable last week after a few tinnies: “The missus will understand – it’s cricket season now.” She doesn’t.

THURSDAY: I wake to learn that a first-teamer has been lured by another field this Saturday – one with girls, live bands and beer tents. As a result of the first-team skipper’s ‘well he didn’t say he was unavailable so I assumed he was available’ communication strategy, I lose my opening bowler. Soon after, my flaky first-change informs me he has a “family thing on Sat mate, soz… but I’m not planning to miss another game this year”. Sure.

FRIDAY: After convincing myself the bowling armoury is functional despite having a two-four seam-spin ratio in early May, I plonk myself on the sofa in front of Game of Thrones, G&T in hand. The phone buzzes. It can wait. I throw it on the armchair. But something burns: perhaps one of the first-team cry-offs has had a change of heart and I’ve got my opening bowler back? Not quite. The first-team’s overseas pro has lost an eyelash – or something comparable – and wants to “play it safe”. My gin-powered text tirade achieves little. I lose another seamer. My field maps and any hopes of promotion are bin-bound. Give me that bottle.