The first time I saw Imran Tahir’s frenzied wicket celebration was a few weeks into the 2004 season, when he took the last Betley wicket off the penultimate ball of the game to give my team, Moddershall, a much-needed victory.

We were among the title favourites that year, having signed Immy from Norton-in-Hales, for whom he’d equalled Sobers’ record 104-wicket haul en route to the North Staffordshire and South Cheshire league title in 2002. However, we never really recovered from a ropey start which saw a player mutiny four games in and yours truly truly stepping into the shoes of our prematurely departed skipper.

Imran Tahir turns 41 today!#DidYouKnow he represented Pakistan at the 1998 U19 World Cup, claiming 4-54 against England, the best innings figures for the team in the tournament. pic.twitter.com/PcAStRvBmz

Still, we won the county cup for the only time in our history and lost in the league cup final. So we were optimistic for 2005 and led the table for 19 weeks – Immy even attracting Pakistan coach Bob Woolmer along to one of our games – until getting steamrolled for 52 by arch-rivals Longton, whose attack was spearheaded by Alfonso Thomas, and finished runners-up. The worst of times.

I dealt with my PTSD by playing two seasons in Nottingham. Immy also left, having taken 86 wickets at 12. By the time we reconvened at Moddershall in 2008, the team had been through two relegation battles. That winter, four senior players walked, including the best two amateurs.

Five games in, we were winless – Immy with season figures of 4-236 – and growing worried. And then it happened: six wins from the next nine, plus three winning draws – Immy: 51-435 – and the relegation favourites had surged giddily to the summit.

Our pitches, at our leg-spinner’s insistence, were getting scruffier, especially after our sole surviving frontline seamer broke his femur. We felt invincible, and dared to dream the impossible dream.

And then Immy signed for Hampshire, taking a record 12-189 on debut, which was somewhat bittersweet. We were delighted he’d achieved his goal to get a county gig after several false starts, yet distraught that our fairytale looked over. To make matters worse the agent had wheedled our chairman and Hampshire were offering only derisory compensation. We played fake hardball, but were never going to stand in Immy’s way. The goddamn plane had crashed into the mountain. 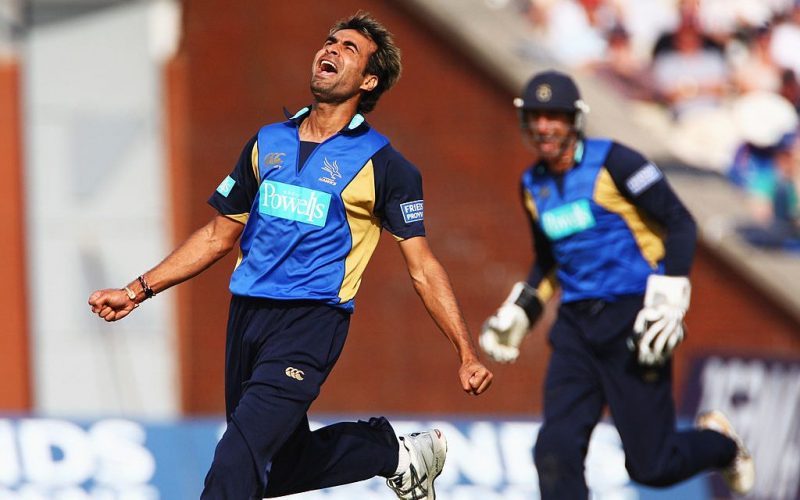 Off he goes! Imran Tahir goes on a celebratory run after taking a wicket for Hampshire during the 2009 Friends Provident Trophy

We started looking for a stand-in but then Immy said he’d looked at the fixtures and felt he could play “five, maybe six” of the final eight games.

One occasion he called on a Thursday afternoon – day two of a County Championship game – and assured me that it wouldn’t go into the Saturday. “Don’t get a sub, I’ll come.” Sure enough, Hampshire scraped home on Friday evening at Basingstoke, Immy drove up to Stoke, played, then immediately set off for a one-day game at Taunton on the Sunday.

"At tea, four wickets were needed for the title. Over to you, Mr Tahir"

We kept our noses in front until the final Saturday, when five more points would wrap up the miracle. It had rained all week. The pitch was a gluepot, the outfield sodden. A vital toss was lost and an hour later we were 22-5, Immy making a golden duck. At this point I found some inner trance-state, chiselling out 71 to get us to 125 and three precious bonus points. At tea, four wickets were needed for the title. Over to you, Mr Tahir.

An hour later, panic was swelling: the opposition were 65-2 and Immy was being heaved over shortened boundaries. Then an astonishing ‘Superman’ catch brought us to within one fizzing wrong’un of glory.

The final time I saw Immy’s demented, berserker celebration close up was that sun-dappled September afternoon, when a pro who could easily have been sat relaxing in Southampton slipped one through the batsman’s gate and hared off towards deep point, 10 of us in hot pursuit, the madness of it all spilling everywhere. The very best of times.

He still pops his head in to watch when county fixtures permit; a humble, loyal guy who held our dreams in his magic fingers and refused to let them die.