Scott Oliver meets a Lancashire League legend who is still bringing home the silverware for his beloved Lowerhouse CC.

When a 29-year-old Allan Donald was tearing up the Lancashire League in 1996, his Rishton team bowled sides out for 42, 31 and 18. However, in back-to-back mid-season games, Chris Bleazard of Lowerhouse CC in Burnley made 60 (out of 131) and 58 (of 136) – the two highest scores by an amateur against ‘White Lightning’ that summer. “Mainly in jabs to fine-leg,” he jokes.

Still an integral part of the club’s first XI at 52, ‘Blez’ now sits second on the league’s all-time run charts (with over 16,500 and counting, including 101 half-centuries) and third on its all-time appearance list, all coming in the light-blue cap of the club for whom he debuted in 1983, a year after playing alongside Michael Atherton for Lancashire under 15s.

Lowerhouse wasn’t the prettiest girl in school, but Blez fell for her anyway and they blossomed into the hottest couple in town, with a beauty that radiated from a deep connection of souls.

✍️ Scott Oliver meets a metronomic left-arm spinner from Leicestershire with a proud record at Lord’s.https://t.co/qix0TOTiwH

It wasn’t until 1990, his first full season after a four-year teaching degree at Warwick University, that Bleazard got fully into his run-making stride. That year he made what remains a club record 857 league runs, following up with 788 in 1991, 75 of them against Accrington, whose pro (19-9-27-6) was somewhat handy. “What Shane Warne could do with the ball was just incredible,” he recalls. “He was turning it too much, really. He’d beat the bat four times an over, then you might squirt a fluke cut shot past slip.”

If the list of pros Bleazard has pitted his wits against is stellar, Lowerhouse’s own ‘pro-reel’ is, by Lancashire League standards, relatively modest. There was Manoj Prabhakar, Jacques Rudolph and Martin van Jaarsveld in his first two decades with the club, while Ryan Harris signed in 2003 (returning in 2006), followed by ‘Two-Metre’ Peter Fulton of New Zealand.

By then, Lowerhouse were the only one of the original 14 Lancashire League teams never to have won a senior trophy – league or cup – in 112 years of competition (derby rivals Burnley had 19). 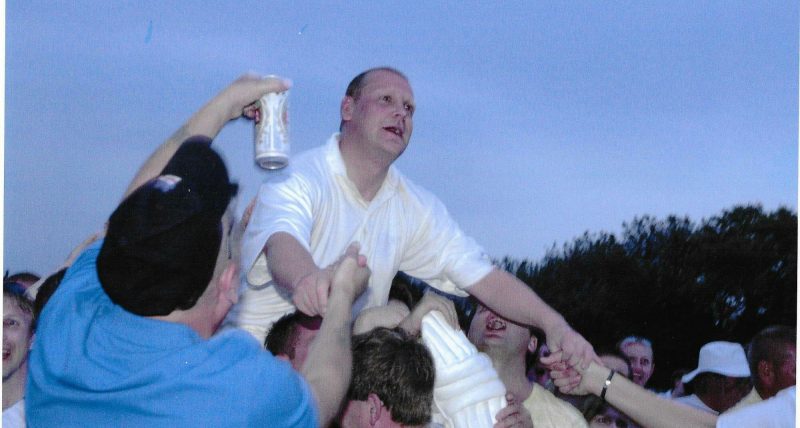 Chasing 310 in the 2004 Worsley Cup semi-final, Bleazard made a matchwinning 107 off 91 balls using a bat given him by Harris. In the final, with a large and nervy home crowd praying Lowerhouse could finally get the monkey off their back, he contributed another ice-veined ton, reaching three figures with the winning hit while his nephew, Ben Heap, now club captain, was non-striker. Bleazard was carried from the field on his teammates’ shoulders and straight into immortality.

“For all the individual things I’ve achieved, it was very special to finally win something as a team because people had kept saying to me, ‘You’re never going to win anything there’.” It was usually followed up with, ‘So why don’t you come and play for us?’ But Blez never had his head turned. Loyalty, humility, affability, and a competitiveness tempered with magnanimity in the face of the game’s slings and arrows, he has been the team’s heartbeat for almost four decades and an inspiration to a couple of generations of Lowerhouse cricketers.

Their trophy drought finally over, the club lifted a maiden Lancashire League title the following season, which they repeated in 2011. A year later, in the club’s 150th anniversary, they won a league and cup double. In 2013, Bleazard, at the age of 46, averaged over 50 in a season for just the second time, scoring his one and only home league century, while the following season Lowerhouse made it three titles in four years: not bad for ugly ducklings.

Last year, they entertained big brother Burnley in the Worsley Cup final, the game producing the largest gate receipts in the history of Lancashire League cricket. Chasing 169, and with two recent semi-final defeats to their neighbours fresh in the memory, Lowerhouse were wobbling at 118-6 when a familiar veteran entered at No.8 and eased them over the line with an unbeaten 20.

Read about the previous Wisden Club Cricket Hall of Famer