Andrew Stoddart led England to a stirring Ashes triumph in Australia in 1894/95. Sadly, he joined other illustrious names on Wisden’s obituary pages in 1916.

Andrew Stoddart, one of the greatest of batsmen, died by his own hand on Saturday, the 3rd of April, shooting himself through the head. A brilliant career thus came to the saddest of ends. Mr Stoddart was born at South Shields on March 11th, 1863, and had thus completed his 52nd year. Curiously enough, considering the great fame he won, he did not take to cricket seriously until 22 years of age, when he became associated with the Hampstead Club, and showed such form, scoring no fewer than five separate hundreds for that team, that before the end of the season of 1885 he had been tried for Middlesex.

From 1886 to 1898, except for the summer of 1888, when he was engaged playing rugby football in Australia and New Zealand, Mr Stoddart proved a tower of strength to Middlesex in batting, keeping up his skill so well that in 1898 – his last full season in county cricket – he averaged 52. He soon became a popular idol at Lord’s his batting, in conjunction with that of TC O’Brien, making the Middlesex matches far more attractive than they had ever been before his day.

He turned out only once for Middlesex in 1899, and twice in the following year, but in his last match for the county – against Somerset at Lord’s – he put together a score of 221, the highest of his career in first-class cricket. Among his most famous innings were 215 not out against Lancashire at Manchester in 1891 and 151 for England against the MCC at Lord’s in 1887, when he and Arthur Shrewsbury raised the total to 266 for the first wicket. In 1886, for Hampstead against the Stoics, he played an innings of 485 – at that time the highest individual score on record.

On four occasions Mr Stoddart paid visits to Australia, first in 1887, as a member of GF Vernon’s team, when he averaged 32. Four years later he formed one of the side taken out by Lord Sheffield, his average then amounting to 37. In 1894/95, and again in 1897/98, he himself took a team out to Australia. The first of these undertakings resulted in England winning the rubber after two victories had been gained by each country, but the second proved a big disappointment, no fewer than four of the five Test matches ending in favour of Australia. Still, in the two tours associated with his leadership, Mr Stoddart came out well with averages of 51 and 34. In the fifth match in the tour of 1894/95, which decided the rubber in England’s favour, JT Brown played a memorable innings of 140, and Albert Ward scored 91. As a Test match player in this country, Mr Stoddart achieved no special distinction. He took no part in those games in 1890, and although he played in all three matches three years later, making 83 at the Oval, his only other appearances for England at home were at Lord’s and Manchester in 1896. 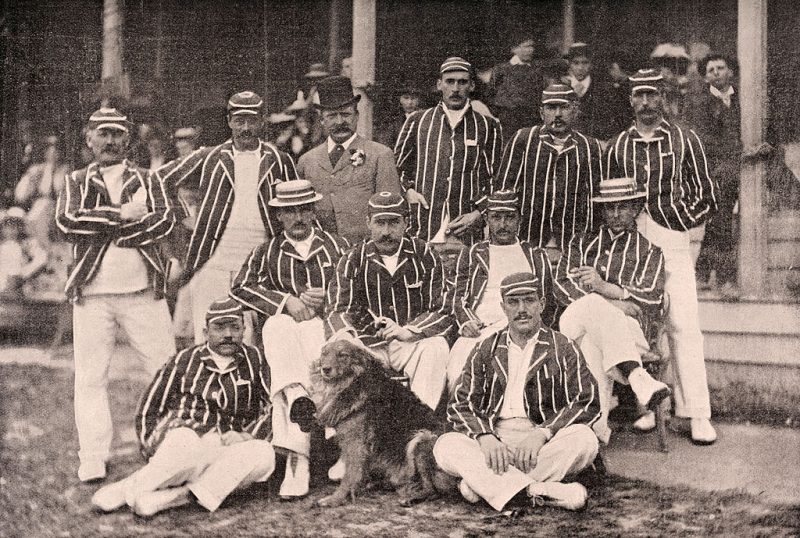 A splendid batsman to watch, Mr Stoddart had all strokes at his command, but was especially strong in driving and hitting on the leg side. Again and again he proved his greatness by his ability to make runs under conditions which found other batsmen at fault, his play, both on fiery and on soft wickets, being quite exceptional. As a special instance of his power on fiery wickets one recalls a superb innings of 91 for Middlesex against Surrey at the Oval in 1892. The Oval was not in good order that year, and Lockwood’s bowling needed some facing. Stoddart, however, did not mind a bit. Two or three times he hit to the boundary balls that got up as high as his head.

Almost equally good was his batting, when in with WG Grace, against Richardson and Mold in the Gentlemen and Players match at Lord’s in 1895. In the early part of his career he proved a useful change bowler, and anywhere in the field he was both brilliant and safe. In his early seasons for Middlesex he had onerous work to do on the off-side when George Burton was bowling, but he was never known to flinch.

Mr Stoddart was one of the very few men who have represented their country at rugby football as well as at cricket. Between 1886 and 1893 he took part in 10 international rugby matches, and would certainly have played in more but for the fact that in two of the intermediate seasons England, owing to a dispute with the other unions, had no international matches. He appeared twice against Scotland, three times against Ireland, and four times against Wales, while in 1889 he played against the Maoris. A splendid runner, with plenty of pace and dodging ability, and not above jumping over an opponent on occasion, he was a great three-quarter – possessed of a very fine pair of hands – a brilliant kick, and a player full of resource.

It was a memorable drop-kick against a gale of wind he made that, giving Middlesex victory over Yorkshire by a goal to four tries, led to the rules of the game being altered. At that time a goal counted more than any number of tries. Mr Stoddart captained England against Wales in 1890, when, on a muddy swamp at Dewsbury, Wales, scoring a try to nothing, gained their first victory over England. Another famous match in which he took part was that at Cardiff in 1893, when, after England had established a commanding lead, Wales finished in great form, and, under the method of scoring then in vogue, succeeded in snatching a win by one point. It may be questioned whether any two players ever enjoyed a better understanding than Alan Rotherham, at half, and Andrew Stoddart at three-quarter. Certainly the combination of these two men formed one of the brightest features of the Rugby game in the eighties.