Patrick Noone looks at how England’s opener adjusted his approach to succeed on day three at The Oval.

To say Joe Denly got into the England Test team through the back door would be something of an understatement. This time two years ago, it appeared that the nine ODIs and five T20Is he played in 2009 and 2010 would be the extent of his international career. It seemed that his legacy would be that of a solid county pro, a club legend for Kent but ultimately unable to make the step up to international level.

But a greater focus on developing his part-time leg-spin in T20 cricket for his county led to him being signed by Dhaka Dynamites in the Bangladesh Premier League in 2017, which in turn saw him get picked up by Sydney Sixers in Australia’s Big Bash League that same winter.

Suddenly, Denly was back on the international radar. A return to England’s white-ball squads followed in their 2018 tour to Sri Lanka before he made his long-awaited Test debut in Antigua in January of this year. Pretty much from that moment, he’s faced scrutiny over his place in the playing XI. Shunted up and down the order to accommodate others, Denly has already gone from opener, to three, to four, and now back to opener again, all in the space of eight Tests.

Much of the criticism of Denly has been fair. There have been times when he has looked out of his depth as a Test batsman, when he has revealed alarming technical flaws against the short ball, for example. But despite the chopping and changing of his position, despite his moments of discomfort against a high-quality bowling attack, Denly has stuck to the task, made adjustments to his game in order to succeed and today, he reaped the rewards.

The most striking change he’s made has been to gradually adopt a more reticent approach when facing Australia’s seamers. The percentage of defensive shots he’s played in the current match is 11 per cent more than during the first Test at Edgbaston and it completes an upward trend throughout the series.

Granted, you would expect to see an increase in that figure with Denly’s promotion to open the batting, but it is nonetheless an example of how he’s been able to read the situation of the game and interpret his role accordingly.

Denly has shown that his defensive technique is one that can be relied upon; today he was dismissed defending for just the second time in the series. That gives him a dismissal rate of one wicket every 124 defensive shots played, the best of any player in the series, besides Steve Smith who is yet to be dismissed while defending. Perhaps it’s therefore not surprising that the more he’s defended, the more effective he’s been. 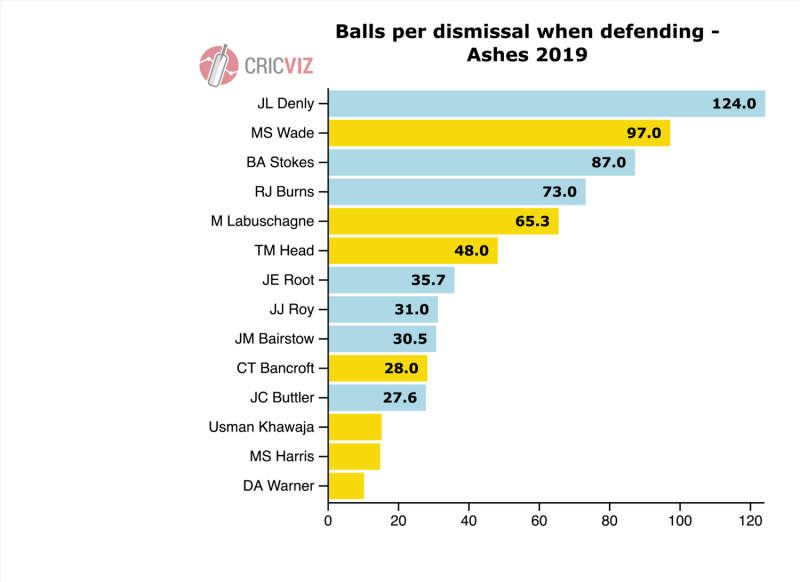 That tightening of his defensive technique has meant that he’s been more effective on the occasions when he has chosen to attack. In each of the first three Tests of the series, Denly was dismissed driving. As the series has progressed, he’s not only stopped getting out when playing the shot, but has also increased his control when driving, reducing his false shot percentage from its 75 per cent peak at Lord’s to just 18 per cent at The Oval.

None of this is to say that Denly played a chanceless innings; he should have been given out lbw on 54, had Australia used their review. A stroke of luck, yes, but Denly made the most of it and did not let it faze him; he simply continued to do what it was that had got him to where he was.

Ed Smith’s tenure as England’s chief selector has been characterised by his tendency to pick players for the Test team off the back of their form in white-ball cricket. Jos Buttler, Adil Rashid and Jason Roy all fit into this category and have faced various levels of criticism relating to it whenever they fail in Tests.

Denly can also be said to be a player who has found his way into the Test team thanks to white-ball prowess, yet criticism of his shortcomings is rarely focused on that fact. Perhaps it’s because he has never been a regular in England’s one-day sides and critics therefore don’t think of him in the same terms.

There is merit in pointing out this distinction; the situations of Denly and the other players are not identical, but the fact remains that Denly has been a beneficiary of Smith’s selection policy and it’s unlikely he’d be in this position without his reinvention as a T20 leg-spinning all-rounder. That is what kick-started his international career, not the weight of his County Championship runs.

There is therefore a peculiar irony that a player who found his way into the team through his T20 form should make his most significant contribution as a Test cricketer through nailing his defensive technique and battling his attacking instincts to play in a more traditional fashion.

Denly’s innings today was a reminder that players can reinvent themselves to play the role required of them, and that it’s never too late to do so. We don’t yet know if his 94 will become another springboard in this most unconventional of careers, or if we will look back upon this as the high point for a player who ultimately couldn’t cut it in Tests. Either way, Denly has shown himself capable of identifying a weakness and putting it right.

Whatever happens, Denly has surely done enough to be on the plane to New Zealand in November. The challenges there will be diverse and different to those he’s faced up to now, but you wouldn’t bet against him finding a way to overcome them.

Patrick Noone is an analyst at CricViz.