India opener Mayank Agarwal was “really disappointed that I threw my wicket away” after he was dismissed for 77 trying to take the attack to Nathan Lyon on day one of the fourth and final Test against Australia.

The 27-year-old and Cheteshwar Pujara, who was undefeated on 130, put on 116 runs for the second wicket at the SCG to propel India to a healthy 303-4 at close of play. 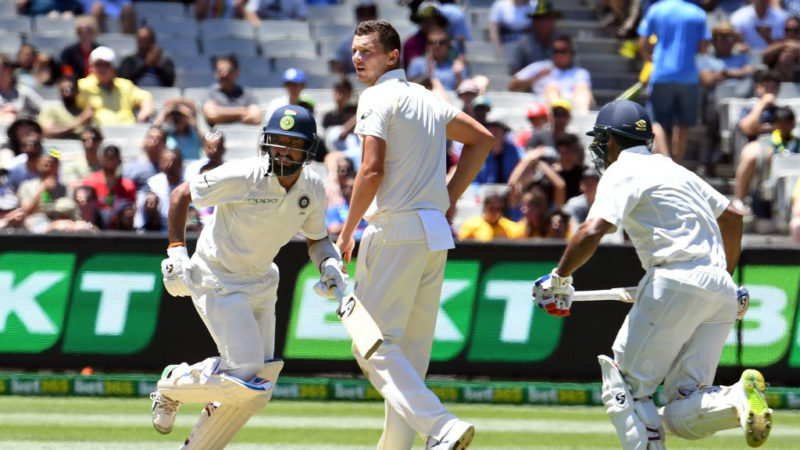 Agarwal and Pujara added 116 runs for the second wicket

But before being dismissed, both Agarwal and Pujara came in for some testing periods against the Australia pace trio of Mitchell Starc, Josh Hazlewood and Pat Cummins, who bowled a lot of short-pitched deliveries.

Related Story: Prithvi Shaw & Mayank Agarwal record on ODI debut offers peek into the future
“The Aussies came really hard,” Agarwal said. “They bowled quick bouncers and were really sharp there. They were consistent. They gave absolutely nothing away.

“The plan was to build a small partnership after each wicket. So we said let’s try and play close to the body and not give them wickets.

“Even if we’re not getting too many runs quickly, it’s alright. Let’s try and knit a partnership and then take it from there.” 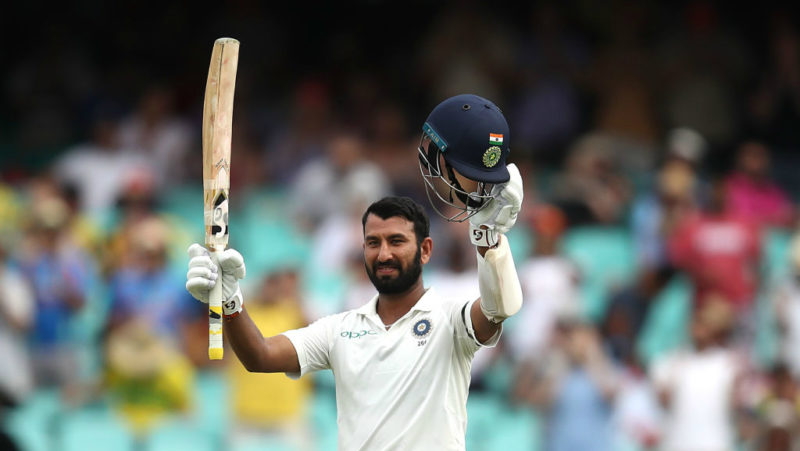 Pujara brought up his third hundred of the series

The duo remained cautious and took India past 100 after they had lost KL Rahul early for 9. Pujara’s advice in the middle proved crucial for the young Agarwal.

Cheteshwar Pujara has been the biggest difference between India and Australia this series and he's not got bored of scoring runs just yet. https://t.co/7sB1qnzK1r

“He (Pujara) keeps talking,” Agarwal said. “He says ‘these are the things we need to look at’, and with his experience he tells me ‘this is what they’re looking to do’. We keep communicating a lot while we are batting out there. It really helps.”

Agarwal, playing just his second Test, scored his second half-century, finishing with a career-best 77, and revealed that batting alongside Pujara was a great learning experience.

“It is great to watch him from the other end,” he added. “The way he grinds the bowlers – he has got a pattern to it.

The seam position here is outstanding!

“He understands his strengths and he sticks to that. He knows he is very tight with his defence and he looks to do that and waits for the bad ball to come.”

Australia’s leg-spinning all-rounder Marnus Labuschagne, who was called up for this Test, came in for a pasting at the hands of Pujara, who collected 12 runs off the spinner in one over, hitting three boundaries.

Related Story: Stats: The fairy-tale partnership between Smith and Labuschagne
“He (Pujara) was very classy,” Labuschagne said. “His time, his patience around the crease and just the way he batted were good.

“One thing that I can take a lot from – he batted a lot of time and that’s something he has done throughout this series. And that’s what we are going to need to do. All our batters need to step up and put a big score on the board.”

That said, Labuschagne believed Australia were not far away from “breaking open” the Indian batting line-up. “We are only two wickets away from being able to break it open,” he said.

“If the boys can come out tomorrow and put the ball in the right areas, we are confident that we can get a few early breakthroughs and hopefully we can get them out under 400.”