In his first match after announcing his impending ODI retirement after the World Cup 2019, the big Jamaican gave a thorough demonstration of all his qualities that international cricket will miss.

The series-opener against England in Barbados was Gayle’s first ODI since late July. He looked a bit tentative in the early overs, but unleashed the ‘Gayle-storm’ once he got settled.

Off his first 36 balls Gayle had scored just 12 runs, and had survived a dropped catch too. There were strong indications that it simply wasn’t the 39-year-old’s day. Yet, in his next 93 deliveries, he smacked 12 sixes and three fours for 123 more runs. Not only was it Gayle’s 24th ODI century, but he had also gone past Shahid Afridi’s record for most sixes in ODIs.

That might no longer be the case after seeing some of the sixes he hit today…https://t.co/R9mhgSYFwJ

His innings was the bedrock of West Indies’ total of 360-8. Hundreds from Jason Roy and Joe Root allowed England to hunt down the total with six wickets and eight balls to spare and that is a testament to No.1 ranked ODI side’s batting prowess. But no credit can be taken away from Gayle.

After the scratchy start, his innings seemed like utter madness, but there was a method to it. Gayle was picky with the bowlers he went after. His first six was off off-spinner Moeen Ali, a meaty blow straight down the ground. He took a special liking to the off-spinner, taking full toll off anything even fractionally over-pitched.

As the innings progressed, Gayle became confident in attacking the quicks too. In the 27th over of the innings, he heaved Liam Plunkett for two towering sixes over deep mid-wicket. Then in the 32nd over, he again hit back-to-back sixes off the same bowler. 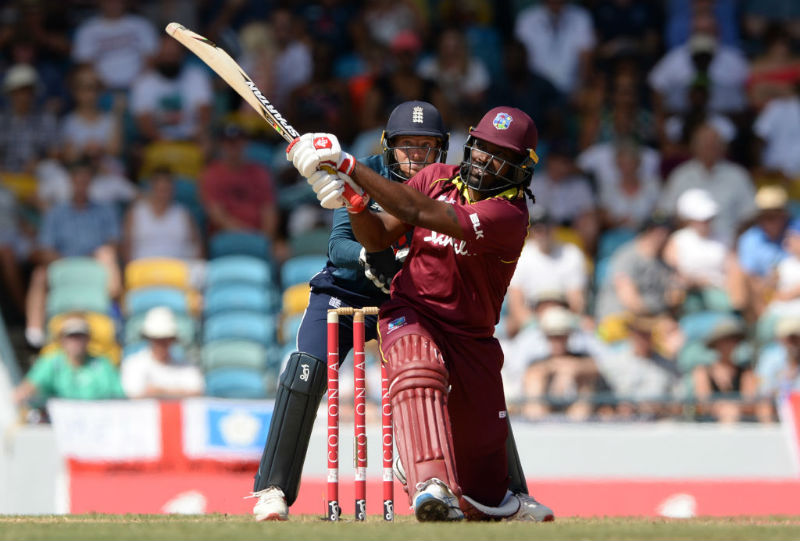 Chris Gayle sends one over the deep mid-wicket fence

Between the powerful sixes, Gayle played cautiously and used discretion to determine which balls deserved to be put away. Another noteworthy aspect of the innings was that he hit with the wind, giving himself the best chance to clear the ropes even if he didn’t hit it so well.

Gayle rated the innings as one of his best. “It’s one of my best innings, to be honest,” Gayle told broadcasters in the innings break. “If you look at my international innings, I haven’t started like that. It took me a while to get my first boundary but I stuck with it. In life, it’s not how you start, it’s how you finish. I used a bit of experience there to know which bowler to target at what particular time,” he said.

"The manner we started in set the tone of the innings. At no stage did we feel we were under pressure to up the rate."

Skipper Eoin Morgan is happy with how England approached a 361-run chase against West Indies👇https://t.co/a2TLNbRD7z

Windies captain Jason Holder rued by the defeat, but lauded Gayle for his knock. “I thought it was a really good innings,” said Holder. “Took some time to get off, but when he got set he put the pressure back on the spinners and forced Morgan to bring back the seamers. An then for him to bat as deep as he did, he held the innings quite nicely together and gave other batters an opportunity to really express themselves.”

This is Gayle’s final ODI series at home, and he celebrated his century by raising his helmet on his bat as a symbol of ‘raising the Windies flag a bit high’.

“It’s my last home series, so I will try my best to keep the Windies flag high and make sure everyone gets a chance to see that. it’s a good start to the series, and hopefully, I can actually continue.”

What a return to international cricket.

What really highlighted Gayle’s game awareness is that he didn’t expect the defense to be an easy one as his assessment told him that the ‘ball would come on to the bat better’.

“Any particular day, a team will take 360, but at the same time we can’t relax or take it for granted,” said Gayle. “We’re playing against the No.1 ODI team and we know they have great all-rounders. They have some great strikers of the ball.”

Gayle’s reading of the match was rather accurate, showing that behind the sometimes bullish persona is a sharp cricketing brain. West Indies will hope for Gayle to continue playing like this because if he does, their chances at the World Cup will suddenly seem a lot more bright.