Two weeks after India’s World Cup dream was crushed in Manchester, captain Virat Kohli maintained that he is proud of what his team was able to accomplish at the tournament.

Kohli’s India went to the semi-finals of the tournament, where they were stunned by top-class fast bowling from New Zealand to lose a 240-run chase by 18 runs and crash out of the tournament. It was a result that few had foreseen, with India having gone into the match as overwhelming favourites.

“What we have spoken to the team is that you should be proud of the way you have played and must never forget that,” Kohli told the Times of India. “The moment you start taking credit away from what you’ve done, you start putting unnecessary pressure on yourself. The important thing is to be humble about what you do, but at the same time, don’t beat yourself up to the extent that you lose your admiration. That balance is very important.”

Firstly I want to thank all our fans who came in huge numbers to support the team. You made it a memorable tournament for all of us & we definitely felt the love showered upon the team. We are all disappointed & share the same emotions as you. We gave everything we had.Jai hind🇮🇳 pic.twitter.com/rFwxiUdqK5

Kohli, who was leading an Indian team for the first time in a World Cup, admitted that the result was hard to come to terms with, but acknowledged the importance of accepting it for what it was.

“I have learnt most in my life from failures and setbacks. The worst setbacks have not only motivated me, but also improved me as a person, made me understand the importance of those times more than the success,” he said. “It makes you sit down and think about what you need to do now, build a roadmap for yourself.” 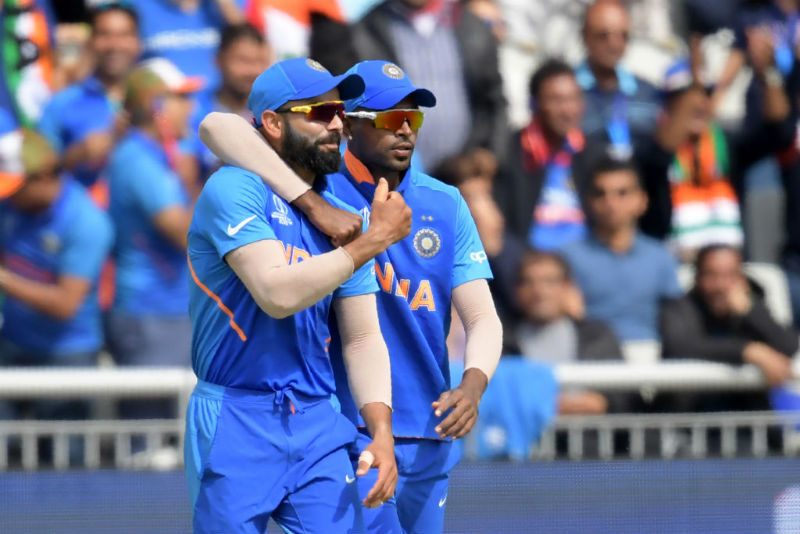 “The atmosphere is such that anyone can say anything to anyone”

Reflecting on the atmosphere he tries to create as captain, Kohli spoke of the importance of inclusivity in the team and said that his job is to encourage players to come out and express themselves.

“The culture of scolding people isn’t there in the change room now. As friendly as I am with Kuldeep [Yadav], I am the same with MS [Dhoni],” he said. “The atmosphere is such that anyone can say anything to anyone. I am walking up to people and telling them, ‘listen, I have committed these mistakes, make sure you don’t do them’.

“I believe in empowering people. I believe in giving them space to express themselves, and when they come to a stage when they feel jumbled, then I’ll have a conversation. I’ll talk to them like, ‘this is where you are heading and this is where you have to head. These are the kind of things you should be doing. You’ll regret not correcting those things early like I did. I don’t want you to waste two-three years of your career’.

“I made many mistakes when I was growing up. I got distracted and wasn’t focused initially. Then I pulled my way back. I am grateful for where I am. The only thing that should stay with you is hard work.”

Looking ahead to what lies after the World Cup, Kohli welcomed the introduction of the ICC Test Championship. India enter into the cycle when they face West Indies in the first Test at North Sound, Antigua, on August 22.

“It’s very exciting,” Kohli said of the new format. “I think it’s happening at the right time for Test cricket. Although you are going to play bilateral series, the meaning and importance are way more. You have to plan for every series. I was excited about something of this sort, and now, it’s coming to life.”