With the Test series done and dusted, England’s tour of the West Indies has rolled into Barbados for the second time. A gentle turnover in personnel means Sir Alastair Cook (who had a breakthrough tour on the BBC) returns home (in economy again), but not before he enjoys a game of beach cricket with some English fans.

He committed to the game the night prior, five rum punches in, and to his great credit kept his word. He wasn’t going to leave the Caribbean without at least one dance at the crease was he? 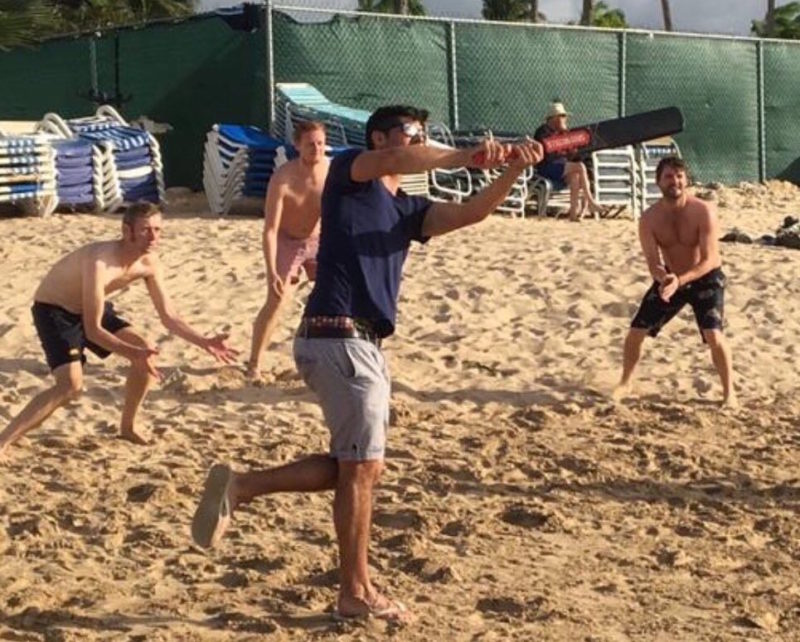 Sir Alastair Cook – a man of his word

The change to white-ball cricket has seen to the arrival of the ODI heavyweights, with Eoin Morgan, Jason Roy, Alex Hales, Tom Curran and Liam Plunkett joining the party. We’re back at the Three W’s Oval for the solitary warm-up match – Jos Buttler isn’t here yet as he’s managed to bag a few extra days off in Miami with his wife (lucky lad).

England are taking on UWI Vice Chancellors XI and it’s rather cosy in the press box. We’re all disappointingly early, having shown up for 10am only to discover it is, in fact, an 11 start, which took literally everybody (including the players) by surprise. 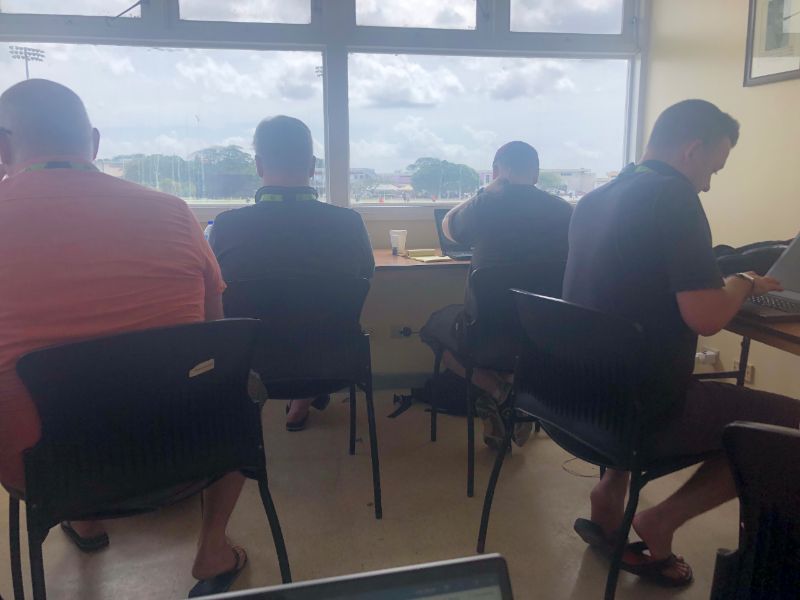 Nonetheless, it’s a busy morning for the media, mostly spent transcribing Chris Gayle’s extraordinary press conference. In a nutshell: the great man is going to bow out after the World Cup, wants to be the pin-up for The Hundred, will party for 50 days if the West Indies win the WC, and has no intention of going anywhere near a microphone or a tracksuit once retired. In the sideshow that is the game of cricket, Jason Roy and Joe Root both carve out centuries as England post 371, with the UWI Vice Chancellor’s XI getting nowhere near.

Quick trip to the ground – largely down to us falling into the slipstream of the police-escorted England coach. Once again hordes of Brits are here, even bigger numbers than for the Test. West Indies win the toss and elect to bat and boy do they do it well, reaching 360-8, hitting 23 sixes, a new world-record. At one stage I think I might need a tin hat in the commentary box, sat alongside the purring Tino Best.

Gayle, the man soon to call it a day in the format, is the main architect with 12 of the maximums, with a total of 13 balls lost having been dispatched out of the ground. During the carnage, England’s chief selector, Ed Smith – looking immaculate in monogrammed shirt and slacks as if he’s strolled off the set of The Talented Mr Ripley – pops in to talk about the T20 squad announced that morning. 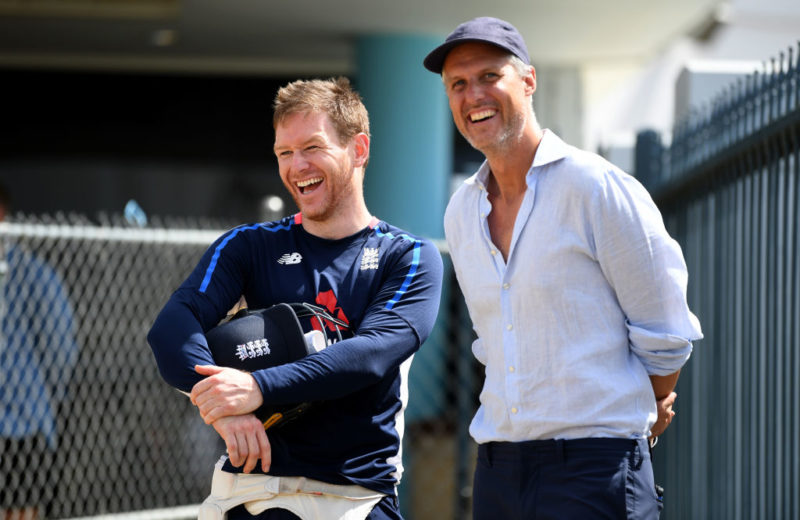 Ed Smith (right) popped into the commentary box for a chat

England start brightly with Roy smacking his seventh ODI century and, in all honesty, it’s a stroll from the best 50-over side in the world, with Joe Root also going to three figures. It’s the third-highest run-chase in ODI cricket. Simply phenomenal from the boys in blue.

I arrive at the ground with the news that one of our party had turned up to an ‘Island Tour’ equipped with snorkel and flippers only to discover a jeep as opposed to catamaran waiting for him. Things can occasionally get lost in translation out here. 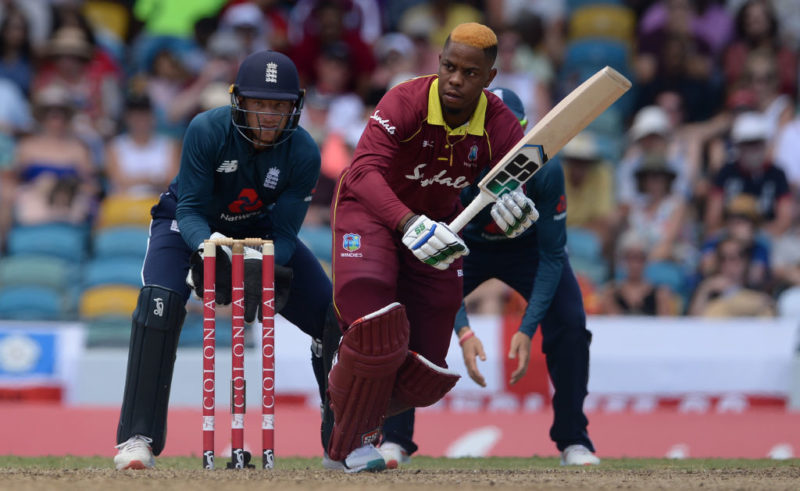 Huge numbers in the crowd again, with West Indies put in to bat. Tino thinks 290 will be par on a slower surface and with the batting side finishing on 289-6, my trusted colleague is left delighted! Shimron Hetmyer is the star for West Indies with a flashy century. At a presentation the previous night, Sir Garry Sobers called Hetmyer a player in his own image. That is some praise.

Two quick wickets to the left-armer Sheldon Cottrell in the first three overs set the cat amongst the pigeons, but England regain control getting to 228-4. What follows is a collapse of epic proportions, Cotterell finishing with 5-46, giving West Indies their first ODI win over England since 2014.

We hit the hugely impressive Grenada National Stadium for the third ODI ­– unfortunately so does the rain. The only highlight is a chap called Dusty from Taunton, who regales us all with a rendition of Sweet Caroline, as Bumble looks on enviously. The game is washed out much to the frustration of the Grenadians who turn out in large numbers. They party on regardless. 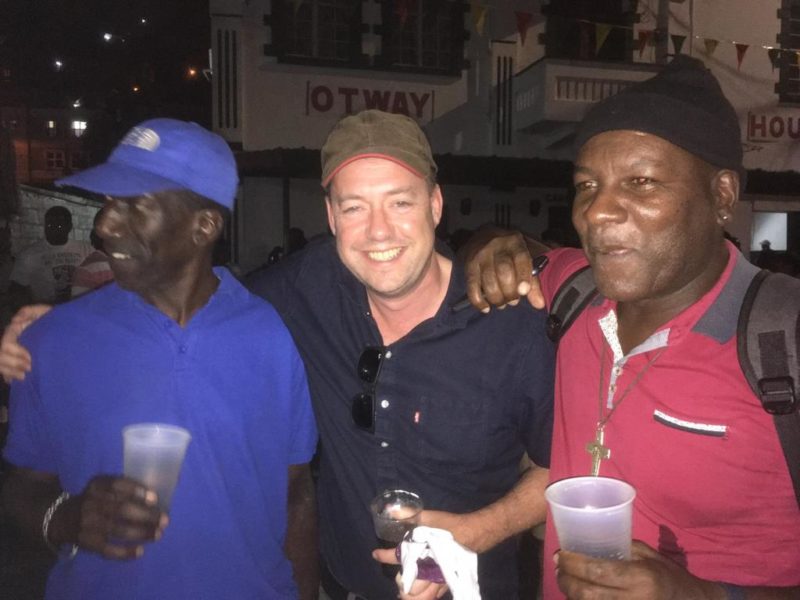 A photo that didn’t go perfectly to plan

Later all the press attended the Taste of Spice Festival in St Georges. The best vantage point was bizarrely a German Schnitzel House, where ESPNCricinfo’s George Dobell was spotted by a couple of fans, one of whom pulled out his phone to show George a piece he’d been reading. George, seeing the phone, assumed a photo was about to be requested, posing accordingly before he was left hanging by the two bewildered readers. Fortunately, Rory Dollard captured the moment for the history books.

Jason Holder won the toss and inserted England, who rather casually ran up a score of 418-6, breaking the record for the most sixes in an ODI innings; the West Indies’ own antics just seven days earlier a distant memory. Eoin Morgan with 103 and Jos Buttler, who summoned up an outrageous 150, were the stars of the show. 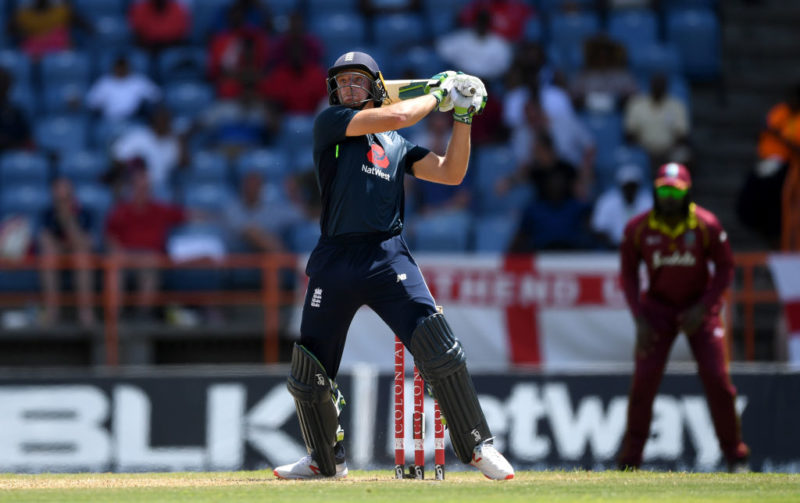 Sixes galore from the blade of Buttler

Chris Gayle then swatted 162, with support from Darren Bravo for 61, before an 89-run partnership between Nurse and Braithwaite almost got West Indies home. Adil Rashid then took four wickets in five balls to seal the game. Eight-hundred runs across 100 overs with 46 sixes to boot. Quite extraordinary.

Travelled to St Lucia with LIAT airline, which stands for, according to the press, “luggage in another terminal”. Sadly for one of our team, Barry Wilkinson (who’s also working for talkSPORT), the acronym has been rather accurate. He remains chipper despite his luggage being in Guyana. 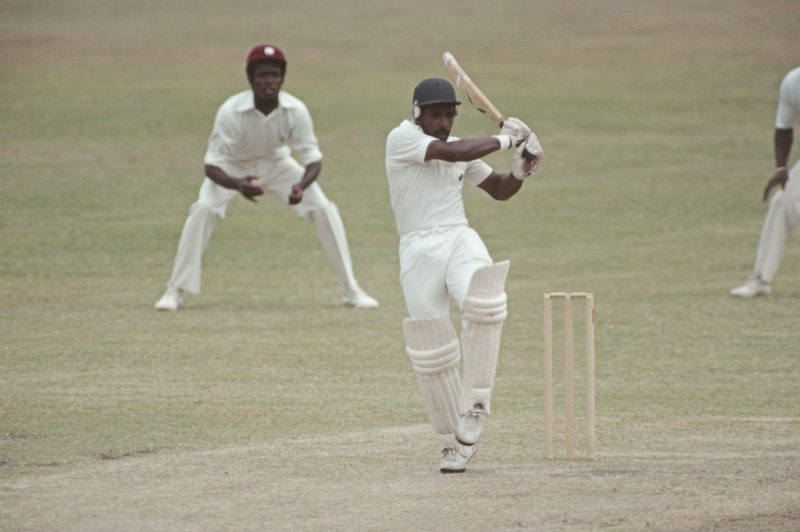 Roland Butcher – the first black cricketer to play for England

I’m currently rooming (in the fabulous Auberge Seraphin Hotel) with Roland Butcher who is working with me as a summariser on the tour. Roland is a significant and hugely popular figure in these parts having been the first black player to play for England. His last roommate in the Caribbean (on England’s 1981 tour) was the late and much-loved David Bairstow. Being in the company of Roland is perfect, as his generous friends showered hospitality on us, notably at the quite stunning Coal Pot Restaurant in Castries.

A lively surface like the Test wicket results in England being skittled for 113 (last five wickets falling for two runs) their lowest total against West Indies, a combination of ordinary batting, alongside some excellent bowling.

The Chris Gayle show follows after, as he scores the quickest-ever fifty by a West Indies player (19 balls), with West Indies reaching the total in the 13th over. A breathtaking series finishes 2-2 with Gayle hinting at a postponement of his upcoming retirement. Next 50-over World Cup at 43? Feasible for a man who controls the Universe.