Jasprit Bumrah had long dispelled any doubts about his Test credentials, but he further enhanced his reputation with his 5-7 in Antigua, courtesy of masterful control over movement, both in the air and off the pitch.

If Jasprit Bumrah’s short career so far is any indication, he will perhaps go down as one of India’s great fast bowlers, and his performance in West Indies in the 2019 series will be a big part of that honour.

Bumrah had already proven himself with the Kookaburra, having impressed on his maiden Test outing – during the tour of South Africa in 2018 – before dismantling Australia’s batsmen in their backyard to help India secure their first ever series win Down Under, with 21 wickets at 17.00. He had also shown glimpses of brilliance with the Dukes ball on India’s tour of England in 2018, picking up 14 wickets from three games.

Taking all that into consideration, it was safe to assume that he was going to be a handful for West Indies’ frail batting line-up, but no one could’ve predicted the extent of impact he was about to have.

India’s pace spearhead breaks skipper’s streak as the International Cricketer of the Year at the BCCI Annual Awards 2018-19.https://t.co/bGQNpeWimW

He hadn’t been quite as effective in the first West Indies innings, picking up 1-55, even as Ishant Sharma took 5-43. Things began superbly for him in the next dig, though, as he had Kraigg Brathwaite caught poking behind to one that straightened outside the line of off from just his fourth delivery.

Seven balls later, he pitched one up to John Campbell, who readily played the drive, only to hear the death rattle behind him, with the ball having curved and then nipped back in to beat his inside edge and uproot the off stump. Another four balls later, he would’ve had Shimron Hetmyer, but Virat Kohli fluffed a straightforward chance at fourth slip.

Bumrah didn’t have to wait too much longer for another wicket, though. The third ball of his fourth over was an inswinger, and Darren Bravo, completely unsure which way Bumrah was going to make the ball move, played down the wrong line. The off-stump was sent flying again. Bumrah then proceeded to clean bowl Shai Hope and Jason Holder, again hitting both their off stumps, in a show of remarkable accuracy and lateral movement.

That spell helped India secure a 318-run win. In the next match in Antigua, Bumrah claimed a hat-trick on his way to figures of 6-27, powering India to a resounding 2-0 series triumph. 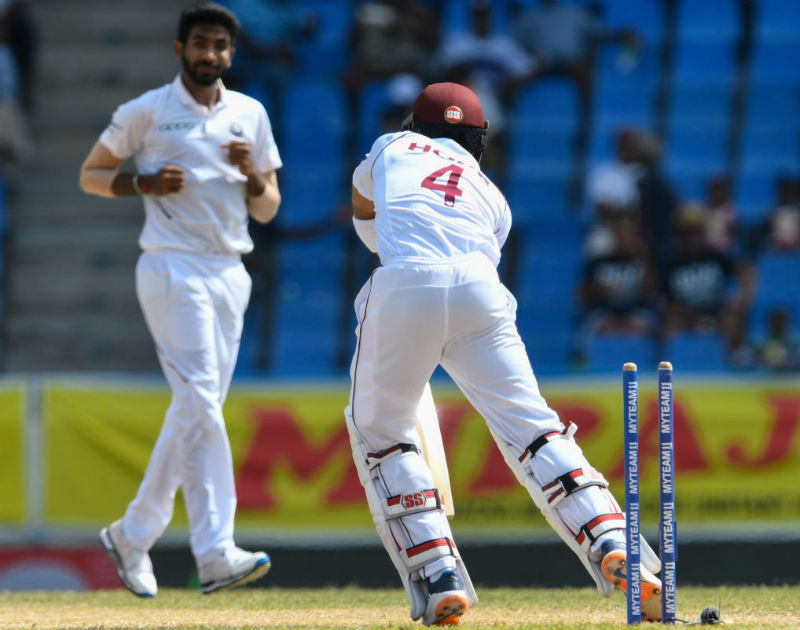 Hope has proved to be one of the more solid batsmen in the West Indies Test line-up – who can forget his twin centuries in Edgbaston to win his side a famous Test? But Bumrah ensured no such heroics would emanate from him in Antigua with an absolute peach. He fired the ball in on a length, with an angle that suggested that the ball would be heading for the leg stump. However, it deviated off the seam to go straight on and hit the off stump. There wasn’t much that Hope, or perhaps anyone, could have done about it.