England head coach Trevor Bayliss has indicated that a senior batsman, possibly captain Joe Root, could occupy the vital No.3 spot during the Ashes, while also stating that the final decision rests with the skipper himself.

“It’s possible, yes [a senior batsman at No.3]. I’m pretty sure it won’t be anyone outside this squad,” Bayliss said, ahead of the first Test in Birmingham, starting on August 1.

"You don't have to be Einstein to work that out. They [top-order woes] have been for the last six or seven years, but it didn't stop us [from winning the Ashes] four years ago"

Root batted at his customary two-down position when England were shot out for 85 against Ireland earlier this week, but could be bumped up a spot higher to No.3, a position he last occupied during the Southampton Test against India in 2018.

His career-best score of 254, against Pakistan in 2016, also came at No.3, and the management might just be tempted to back the 28-year-old batsman for the same spot during the five-Test Ashes, as an insurance against potential batting collapses during the high-profile series.

The last time England’s openers stitched together a century stand was way back in December 2016, when Alastair Cook and Keaton Jennings did so in the Chennai Test against India. Bayliss admitted that the indifferent form of the top order has been a worrisome factor for the Test side consistently over a period of time. 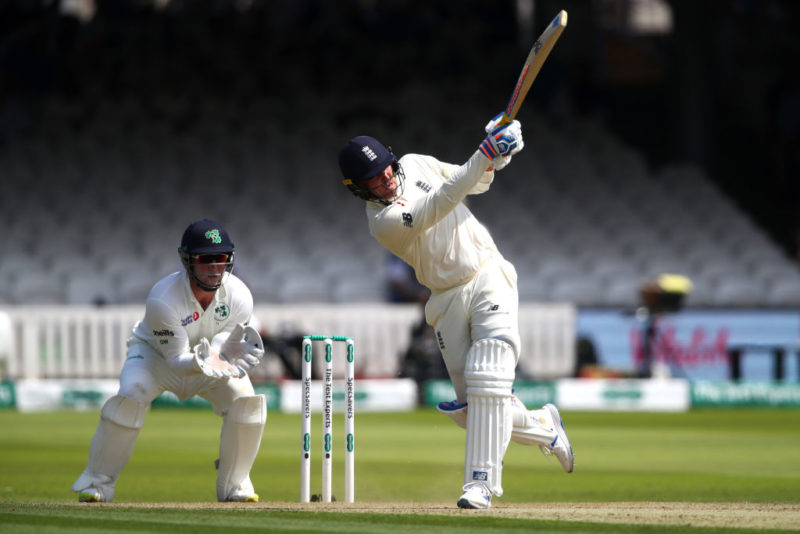 Batting at No.3 after nightwatchman Jack Leach filled in for him, Roy scored a second-innings 72 against Ireland

“You don’t have to be Einstein to work that out. They [top-order woes] have been for the last six or seven years, but it didn’t stop us [from winning the Ashes] four years ago.”

Alongside Rory Burns, England accommodated their regular ODI opener Jason Roy at the top of the order against Ireland, just a week ahead of the Ashes. Although Roy managed 72 in the second innings of his debut Test, Bayliss believes that the free-flowing batsman might have to exercise caution with his methods to excel in the longest format.

Related Story: Uthappa believes he still has an ‘outside chance’ of being a part of a World Cup-winning team

“There was a bit more in those wickets than I’m sure he’s been used to in white-ball cricket over the last few years, but runs are runs. He wouldn’t be the first player to look scratchy and eke out runs. In fact, that’s a good sign, I think.

“We want him to go out and play his natural game, but in red-ball cricket you have to be a little more selective. You’ve got to make a conscious effort to say to yourself, ‘I’m not going to go for the big cover drive on the up until I’m really settled, the wicket is flat or the ball’s not doing as much’.”