Former England opener Marcus Trescothick will retire at the end of the current county cricket season, bringing down the curtain on a career that has spanned more than 25 years at Somerset.

The 43-year-old, who retired from international duty over a decade ago, is currently in his 27th season as a professional and has compiled more than 26,000 first-class runs since his debut in 1993. He has so far hit 52 centuries for Somerset – more than any other player in the club’s history – and a further 7,374 List A runs.

Earlier this season Somerset ended their long silverware drought and a run of five consecutive final defeats to triumph over Hampshire in the last ever Lord’s Royal One-Day Cup final, a ground where Trescothick is immortalised on the honours five times for his England heroics (two Test and three ODI centuries).

The County Championship Division One title, however, has continually eluded Trescothick after a series of near-misses, notably the 2016 season and the declaration pact agreed between Middlesex and Yorkshire to guarantee a victor, as well as Nottinghamshire’s final-day clinching of the title in 2010 when both sides finished level on 214 points.

Somerset currently lie top of the division after seven games this season but this week were defeated by second-placed Essex – a match that Trescothick did not feature in.

He explained the decision to hang up his boots to the club website. “It’s been an incredible 27 years and I’ve loved every minute of it. However, everything has to come to an end eventually. I’ve been discussing my future with the club and my family for a while and we felt that now was the appropriate time to make this announcement in order for both the club and I to put plans in place.”

“There’s still a lot of the season left, and I’ll be doing everything I can to put in performances for the Second XI in order to force my way back into contention for the first team. 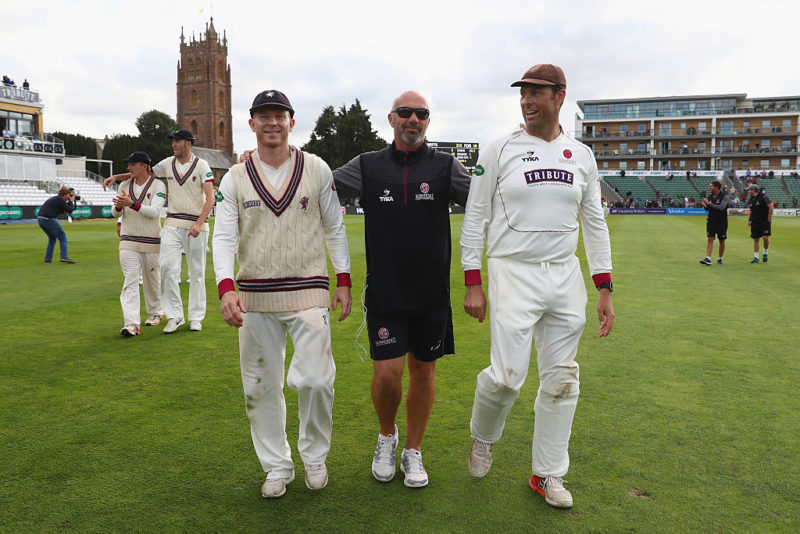 Trescothick in 2016 with Chris Rogers and Matthew Maynard, then director of the club

The club’s director, Andy Hurry, thanked the left-handed opener for his many years of committed service.

“Marcus Trescothick is one of the finest players that this country has ever produced, and his record on the field of play speaks for itself,” he said. “His passion and enthusiasm for the game of cricket is infectious, and his work ethic is phenomenal. He is the absolute personification of what a professional sportsman should aspire to be.

“Marcus has become part of the very fabric of this club and I’m sure that I speak for everyone associated with Somerset Cricket when I thank him for everything that he has done for the Club.”

“You’re learning from Rooty and Stokesy. They set a benchmark from a batting point of view"