Rohit Sharma’s monumental 264 was a tale of two stunningly contrasting halves – after being dropped on 4 and scratching around for runs initially, Rohit cracked open a toothless Sri Lanka attack.

Rohit Sharma has awful timing with injuries. In 2010, minutes before what would have been his Test debut, he twisted his ankle after stepping on a football and had to wait for three long years before another chance would come around.

Lady Luck tripped Rohit once again in 2014, less than a year before the next World Cup, when he broke his finger on India’s tour of England. In the three months that he was out, Ajinkya Rahane quietly edged ahead in the openers’ race. Returning for the Kolkata game, Rohit had to create an impact on his comeback.

By the time his 225-minute marathon ended, Rohit’s ODI average jumped from the around 35 to 38.19, and his ODI reputation shot up breathtakingly. Rohit was relentless, Sri Lanka were hapless. It gave ODI batsmanship its very own Mt. Everest to gloat about. 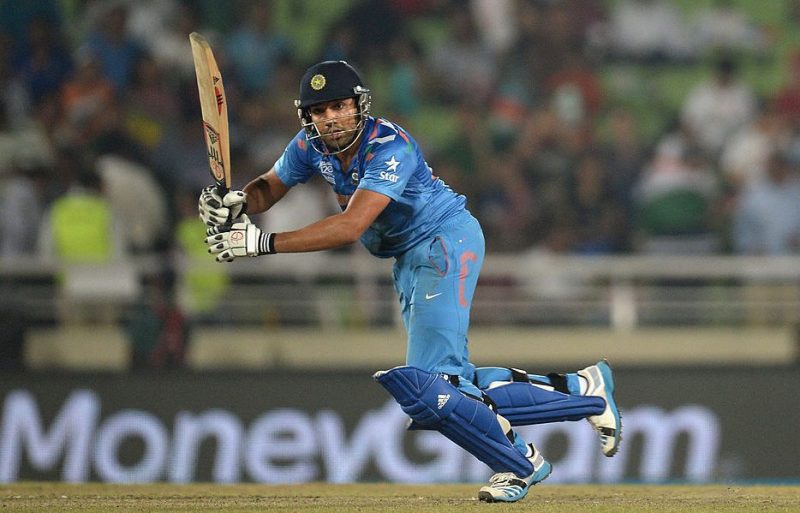 Despite gathering just 12 off his first 25 balls, Rohit finished with a strike-rate of 152.60 (file)

The innings didn’t begin too well for the typically fluent right-hander. Quite on the contrary, he looked rusty and tentative. He was kept silent by the Sri Lankans. Eighteen balls and 4 runs in, he slashed a thick edge to third man, where Thisara Perera made a meal of the catch. Gifts can be expensive, this one was worth 260 runs.

After the blooper, Rohit looked determined to dig in. His first boundary, a lazy pull, came off his 21st delivery. A flick from the off-stump to the mid-wicket ropes, was enough to indicate that he was well on the verge of finding his timing, even though runs were hard to come by for some time still.

The boundaries weren’t massive, the outfield was making the ball sprint, and the pitch was as flat as the Strand Road outside the stadium, but Rohit was happy to take his time, perhaps confident that he could catch up once he found his rhythm. It was only after helping tick the team total past 100 that he started aiming for the ropes.

Between overs 23 and 29, Rohit and Kohli picked up at least one four in each but one over. Rohit looked freer, casually going inside-out to spinners, and clanking any loose width to the leg-side fence.

Then came the batting Powerplay, and that’s when the real mayhem began. Nuwan Kulasekara was carted for three fours, and Rohit jumped from 78 to 93.

A clip to leg-side brought up his first 100 runs – still scoring at run-a-ball. The joyous celebration signified what it meant to him, but perhaps even he didn’t know that he was only getting started.

India returned with 57 from the Powerplay, 45 of which were Rohit’s. Moving back and forth in his crease, he was creating room, cutting away spinners, sweeping deliveries from outside off to the square-leg stands and hoicking full ones past clueless bowlers. In 25 balls, he brought up his next 50.

Thereafter, he found a seventh lever in his gearbox. As the floodlights lit up, Rohit started pulverising the quicks. Mendis was quickly brought back, in hopes of enticing a mis-hit, but there was no stopping him now. He was put away for four fours, and did not return to bowl again.

A crunching drive through covers brought up his second century, this one coming off just 51 balls. By this time, Sri Lanka’s fielders had sunk to their spots, and Rohit’s light-toned jersey had turned navy blue because of perspiration.

Related Story: Rohit surpasses Kohli for most 50-plus scores in T20Is, limps off the field with calf discomfort

The bowlers lost all their bearings thereafter; full-tosses were clonked deep into the leg-side stands, attempted yorkers were dismissed through covers, and anything in his range was met with a straight bat and deposited over the sightscreen. He sprang from 197 to 263 in 20 deliveries, nine fours and three sixes included, and road-rolled past one-day records, propelling his name far, far ahead.

He was dismissed off the final ball of the innings, attempting a tenth six. By then, he had looted exactly 100 runs in the last 10 overs, after scratching away for 12 runs in the first ten. In their chase of 405, Sri Lanka were later bowled out for 251 – 13 fewer than Rohit’s score.

Rohit Sharma had already pocketed 240 runs by then, but he remained hungry.

In the hopes of a miracle, Nuwan Kulasekara hurled a full one way outside the off stump. Rohit, deep in his zone, followed it, hopping half a step to his right, and short arm-jabbing it deep into stands over long-on. It was a ridiculous stroke. Sunil Gavaskar guffawed in the commentary box. It was one of those days.