Matthew Wade has expressed his disappointment after missing out on a place in Australia’s Test squad for the two-match series against Sri Lanka despite a staggering return of runs in this season’s Sheffield Shield.

Wade, who has played 22 Tests since his debut in 2012 as a wicketkeeper-batsman, is currently on top of the Shield run-scoring charts, with 571 runs to his name at an average of 63.44.

Nevertheless, Wade was overlooked as a specialist batsman for the Sri Lanka Tests, despite the selectors ringing plenty of changes after a 2-1 series defeat to India. The Queensland pair of Joe Burns and Matthew Renshaw have returned to the national set-up, with Victoria’s Will Pucovski earning his first Test call-up.

“How Maxwell must view Ed Smith’s handling of Jos Buttler and wish he had a similar guiding light.”@Taha_Wisden on the Australian selectors’ extraordinary desire for players of a certain character and energy over ones with the best numbers behind them.https://t.co/lB3iOOwcbl

Speaking to SEN Radio on Monday, Wade displayed his disappointment at the decision, saying: “It doesn’t really make a lot of sense.”

“It’s disappointing for me, it seems the criteria when Justin [Langer] took over was weight of runs, hundreds,” said Wade. “I feel like I’m ticking all those boxes and the reasons I’m not getting picked is I’m not batting in the top four.”

Upon the announcement of Australia’s Test squad last week, Trevor Hohns, the chairman of selectors, said: “It’s great to see Matthew scoring some runs. But if Matthew wants to be considered as a straight out batsman, it would be nice to see him batting up a little higher for Tasmania and that conversation has been had.” 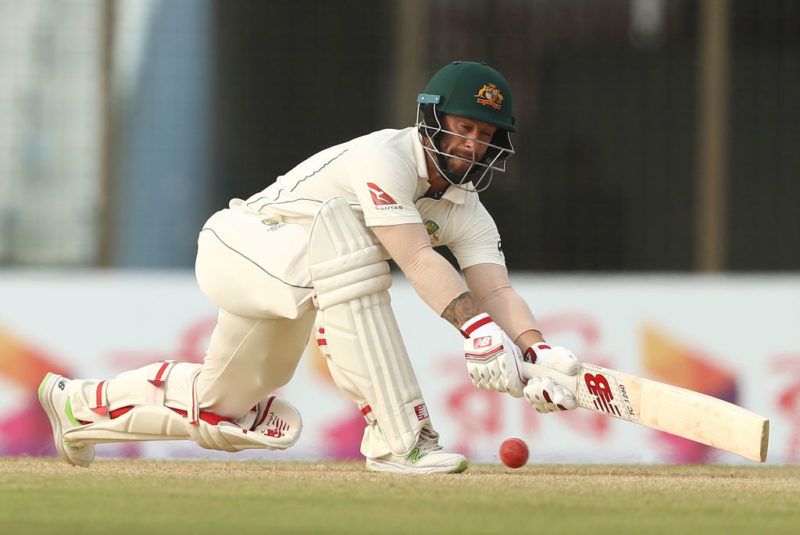 Wade has two Test hundreds to his name

Despite Hohns’ remarks, Wade, who has batted at No. 6 for Tasmania this season, laid out his credentials to succeed in the current line-up.

“The Bellerive pitch is a tough batting wicket,” said Wade. “I’ve been at stages like 4-50 a lot and I think it’s a specialist position five and six, you got to bat with the tail, you probably need someone to set the pace a little bit down there with the tail and kind of build the total a different way than just a specialist batsman.”

Wade also added that giving up his wicketkeeping duties for Tasmania would probably not help his chances of a return to the Test arena, having not featured for Australia in the longest format since September 2017.

“I feel like if I give up the gloves completely, go bat at four, it doesn’t pan out as well, I feel like the next thing I’ll be hearing is I can’t be picked as the back up keeper because I’m not keeping.

“It’s a tough situation to be in, I’m not really sure what we’re going to do.

Related Story: Knee injury rules out Matthew Wade’s Somerset stint
“I’m not going to do it just for my own good.

“We will work out what’s best for Tasmania playing games and if that’s me batting five, batting seven, I don’t really care, I’ll go wherever I have to go.”