India’s reputation as an increasingly invincible force in Tests at home gained more credence in 2019, after they swatted away South Africa and Bangladesh without trouble across five matches. It speaks volumes that their lowest margin of victory in those games was by 203 runs over South Africa in Visakhapatnam, in the season opener. Rishad D’Souza looks at the numbers that defined India’s long-format dominance at home in the calendar year.

Four consecutive innings victories: That victory against South Africa in Visakhapatnam was a mere preview of the harsh treatment Virat Kohli’s men were to dish out to their two visitors.

They went on to win all the remaining games without having to bat a second time, becoming the first team in the 142-year history of Test cricket to string together four successive innings victories.

A fine session for India, one in which Virat Kohli became the first Indian to score a Test century with the pink ball.

Virat Kohli becomes the first Asian to score over 5000 runs as captain: During his knock of 136 against Bangladesh in India’s maiden day-night Test, in Kolkata, Kohli surpassed 5000 runs as Test captain, becoming the first man from Asia to do so. He was also the fastest captain to the landmark, taking 86 innings, 11 fewer than the next best Ricky Ponting.

He is sixth on the overall list, with only Graeme Smith, Allan Border, Ricky Ponting, Clive Lloyd and Stephen Fleming above him, none of whom average more than 51.51, which is significantly lower than Kohli’s 63.80.

Openers averaging 90+: In a year when some teams struggled to find one steady opener, India had two scoring at Bradmanesque averages at home. The decision to promote Rohit Sharma up the order proved a masterstroke, as he peeled off three hundreds, including a double-century against South Africa. Across the five games, he scored 556 runs at 92.66.

Mayank Agarwal, too, registered three triple-figure scores in five innings, and converted two of those into double-hundreds to stack up 597 runs at an unbelievable average of 99.50 in his first season at home. 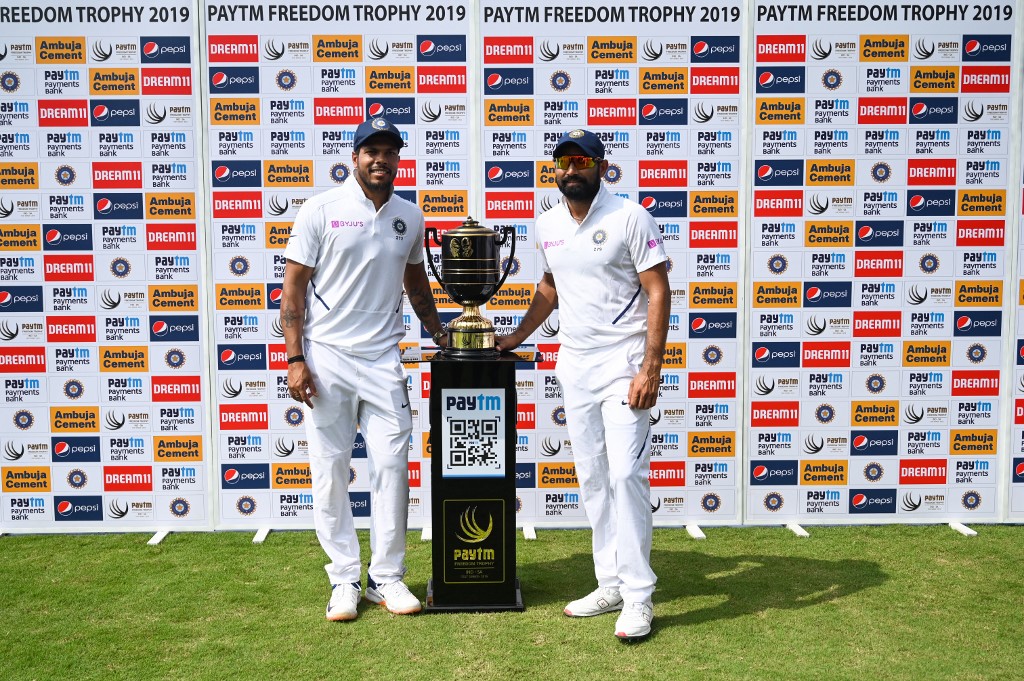 All fast bowlers averaging under 20: While India have dominated almost every series at home ever since they lost the 2012-13 series to England, it was their spinners who were doing the bulk of the damage. Despite the steady improvements that their fast bowlers have made, many would have expected Ravindra Jadeja and R Ashwin to be the main tormentors for the tourists, especially once star fast bowler Jasprit Bumrah was ruled out with a lower-back injury.

But Umesh Yadav, Mohammed Shami and Ishant Sharma breathed fire in tandem, each averaging under 20 and displaying immense skill in extracting bounce and movement. Umesh was the wrecker-in-chief, picking up 23 wickets at just 13.65. Shami wasn’t too far behind, his 22 wickets from five matches costing 14.90 each. Ishant claimed 14 scalps at 18.14.

Seven consecutive wins: With the win against Bangladesh in Kolkata, India extended their winning streak, which began in North Sound against West Indies, to seven matches. Never have they won as many games on the trot.

Virat Kohli brings up 33 Test wins as captain: India began the home summer with 28 wins under Kohli’s regime. By then, Kohli had already gone past his predecessor MS Dhoni as their most successful Test captain ever.

He went on to extend that lead by another five matches, and now finds himself among the top five in the world for most triumphs as leader. Only Graeme Smith (53), Ricky Ponting (48), Steve Waugh (41) and Clive Lloyd (36) are in front of him.

"The cricket-viewing experience in India is dismal, and addressing that, more than the colour of the ball, will decide the sustainability of the sport."@kuks argues Test cricket in India needs more than a pink ball to draw the crowds.

India smash South Africa by a record margin of innings and 202 runs: The hosts had just registered their biggest win against South Africa in Pune, hammering them by an innings and 137 runs, on the back of Kohli’s majestic 254* and two spectacular bowling performances. But that record was rather short-lived, as India bettered that in their very next game.

Rohit hit 212 as India declared on 497/9, before the bowlers scuttled the visitors out for 162 and 133, thus registering an even bigger win. The defeat is also the joint third biggest that South Africa have ever suffered.

India boss the early stages of the World Test Championship with a clean 360 points: Nevermind lose, India haven’t even drawn a game since the start of their World Test Championship campaign with the tour of the West Indies. After beating West Indies 2-0 on their shores for a full 120 points, they collected the full quota from their series against South Africa and Bangladesh too. At the time of writing, no team is within 244 points of them. Australia are second on the table that will determine the two finalists who will face off in the inaugural final, at Lord’s in 2021. As things stand, it is difficult to see how India won’t make it there.