In a new series on the cricketers that hooked our writers onto the game, Karunya Keshav remembers Hansie Cronje, the man that stood for the good, the bad and all of the grey in the sport.

My childhood memories of watching cricket suggest at a flirtation with the sport and its players, never passion. Favourites were as seasonal as the branding on a Pepsi bottle. I liked Kumble because my mum, like a typical South Indian woman with an appreciation for a strong ’stache, liked him. Then I didn’t, for the same reason, because God forbid I agree with my parents on anything. I liked Ganguly because he wasn’t Tendulkar. I liked Dravid because he wasn’t Ganguly. I wanted to dislike Shoaib Akhtar and Glenn McGrath, but I traitorously couldn’t. And I smiled a little too much when Shane Bond came on.

But in this bevy of passing fancy, the relative regular was Hansie Cronje. He was not ever a favourite cricketer (and I declare this not as evidence of my moral compass in adulthood), but he and his South Africa side introduced me to the kind of cricket I wanted to watch. 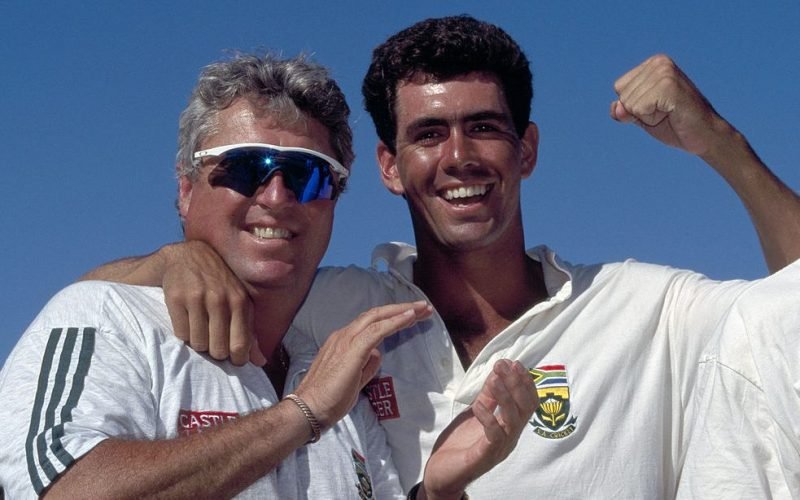 I do remember that he led a team that won a lot. But not enough of the big ones to make them insufferable like the Aussies.

Looking at the numbers now, I know only Australia’s Mark Taylor led his team to more Test victories in the 1990s than Cronje did (26 to 24), and that among those who led their country in at least 20 Tests in that period, there is no captain with a better win-loss ratio than the South African skipper.

Back then, his appeal lay simply as the man who led a team that was everything I wanted the India of the Nineties to be. Oh to support a team that were always diving around like Jonty Rhodes and tearing in with the fire of Allan Donald, that possessed the flair of Gary Kirsten and, in the second half of the decade, the enviable all-round abilities of Lance Klusener and Jacques Kallis.

Trawling through the cobwebs of the mind, it comes as little surprise that my two most enduring memories of Cronje have little to do with the cricket itself, but of him as a captain. The first, which the internet reminds me occurred in the opening match of the Titan Cup in 1996, was when he rescinded a run-out appeal against Ganguly who, having tumbled mid-pitch after a collision with the bowler, had been caught short by another expectedly brilliant bit of fielding. That seemed like a nice thing to do.

The second is from the 1999 World Cup, again against India, when he received instructions on an earpiece from the coach. Unlike the match referee and the ICC then, I agreed with Bob Woolmer that it was a pretty obvious thing to do – what, we now had a problem with a captain and his coach being clever? Ridiculous!

Related Story: ‘I used to console him’ – Akhtar recalls time with ‘father-figure’ Woolmer

The semi-final loss that year was crushing. The match-fixing scandal not long after was more confusing. The “end of innocence” that Mike Atherton rued was mine too, as a fan of Cronje. Because, of course, leaders too fall from grace. I was young enough not to become jaded with cricket and an optimist enough not to believe every result was rigged. Ironically, the scandal instead opened my eyes to a sport that was more than just a game, as I’d seen it till then.

But, ask me now if we expect too high a standard of morality from our sportspersons or not enough, and I still don’t have an answer.