Rahul Chahar is the latest in a long line of wrist-spinners who have become the flavour of contemporary cricket. Ahead of an important season, with India building their squad for back-to-back T20 World Cups, Roshan Gede caught up with the 20-year-old, who recently made a memorable India debut.

At a time when wrist-spinners have become a prized part of limited-overs sides, Rahul Chahar has understood the importance of not falling prey to the trap of competition.

With their enterprising skills and astuteness, wrist-spinners have always been an enthralling species, be it the shrewd and beguiling Sir Richie Benaud, the great, mystical Abdul Qadir, or Shane Warne, with his geometry-defying turn. However, being a frontline spinner is no easy feat – the competition is tough.

Ask Stuart MacGill, who played most of his international cricket in the shadow of Shane Warne, despite boasting 208 Test wickets for Australia at a strike-rate of 54 – the second-best for spinners with more than 200 Test scalps, after Ashwin, and 3.4 points better than Warne’s. It wasn’t too different for Rangana Herath, the Sri Lanka left-arm spinner, whose career blossomed only after Muttiah Muralitharan’s retirement, with 362 of his 433 Test scalps coming in that period.

"Somehow, I feel there aren't enough wrist-spinners in domestic or club cricket"

Still in his early days as an international cricketer, Chahar is up against the excellent Kuldeep Yadav and Yuzvendra Chahal in India’s limited-overs set-up, while R Ashwin and Ravindra Jadeja have for long held the fort down in Test cricket. But the youngster isn’t getting overwhelmed.

“I don’t look at it as a competition,” Chahar told Wisden. “Whenever I meet Kuldeep or Chahal, I just try to seek their feedback on my bowling. Each of us has a different  and variations. We seek each other’s advice during the game. They have a lot of experience and I look to learn as much as possible from them.” 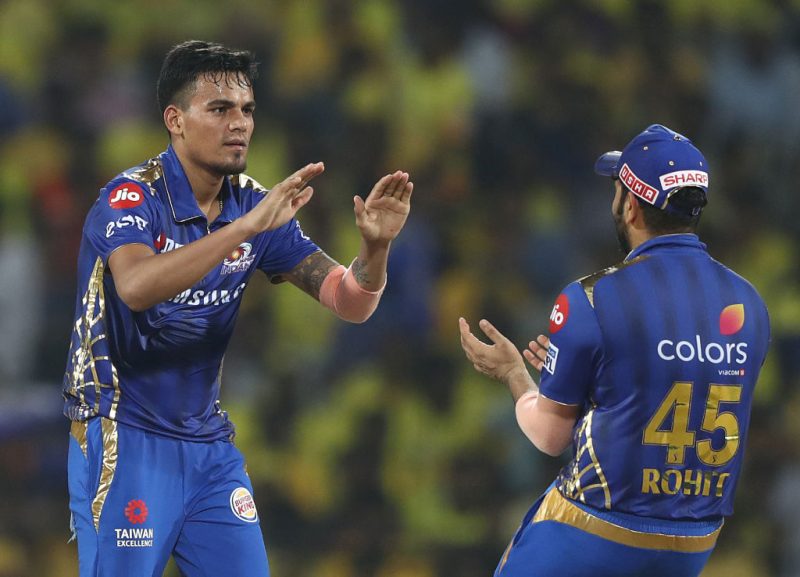 Rahul Chahar played a big part in Mumbai lifting the IPL trophy for the fourth time in 2019.

Perhaps India’s senior spinners should be the ones to watch out for the new contender. Chahar had a successful season with Mumbai Indians in the 2019 Indian Premier League, grabbing 13 wickets in as many games while maintaining an impressive economy of 6.55. One of the unsung heroes en route to Mumbai’s title triumph, he accounted for some top international players, such as Jos Buttler, Jonny Bairstow, Faf du Plessis and Ben Stokes. In the first Qualifier and the final against CSK, he returned figures of 2-14 and 1-14 respectively. About three months later, he earned his maiden international call-up, for the T20I series against West Indies, and took 1-27 in three overs in the only game he played.

“It was a fantastic experience,” Chahar said, reflecting on his India debut. “I have been working hard for this since childhood and, luckily, it paid off. But still a long way to go, I need to work harder.”

For now, Chahar is a part of India’s limited-overs plans. But his ambitions extend further, to Tests as well.

"Whenever I meet Kuldeep or Chahal, I just try to seek their feedback on my bowling”

“Test cricket is the most important format for me,” he said. “My uncle has always been telling me that I’m made for Test cricket: ‘you’re good for limited overs cricket too, but Test cricket is perhaps your forte’ … Playing a Test match is massive for any cricketer. The day I make my Test debut, it’ll be a ‘dream come true’ moment.”

Chahar has offered plenty of evidence of his red-ball skills in domestic cricket. During the 2019 Duleep Trophy last month, the leg-spinner had almost no assistance from the surface on the second evening of the game against India Red, after his team had posted 440. Moreover, Karun Nair, fresh off scores of 99 and 166* from the previous game, was hitting spinners for fun, and had raced away to 57 off 68 balls by stumps. A rejuvenated Chahar returned on the third morning to resume his duel with Nair, making for an exciting hour of play. Nair, who is one of the fluent stroke-makers against spin, could score only three runs from the 24 balls he faced from Chahar. 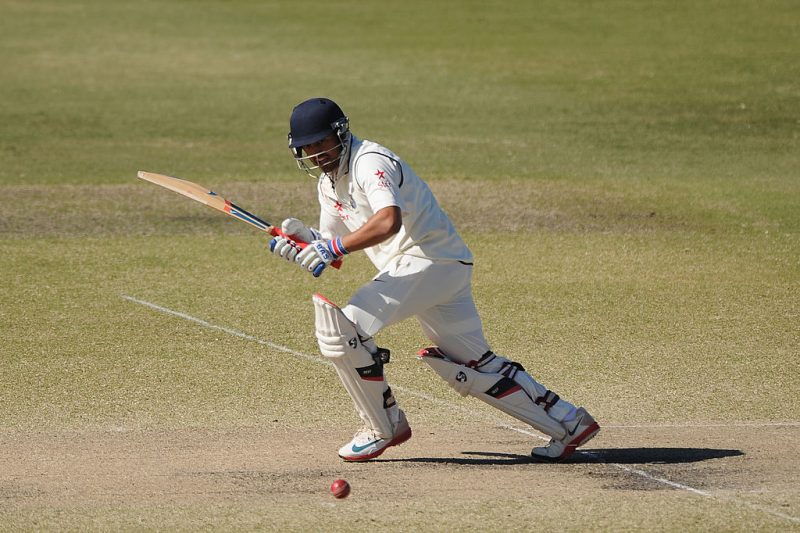 Chahar held his own against Karun Nair, one of the better players of spin in the domestic circuit

Chahar pitched it on good lengths, Nair played and missed; Chahar tossed it further up, Nair got beaten in flight; Chahar shortened his length, Nair hopped on the back foot but was deceived by the inward curve, as the ball shaved the inside edge on its way to the pads, dropping out of reach of the short-leg fielder.

It was morale-boosting for the bowler. Nair turned back, talked to himself, trying to concentrate harder. He was stranded on 89 for 12 balls, took a single off the 13th, and two balls later, played a false stroke against medium-pacer Ankit Rajpoot to lose his off stump. Rajpoot later acknowledged Chahar’s contribution to the wicket: “Partnerships – that’s what the game is all about, isn’t it?” he said.

So what makes wrist-spinners special? Why are modern-day batsmen finding it increasingly difficult to read them? “Batsmen these days normally face seam bowlers and off-spinners in the nets,” Chahar remarked. “I don’t see many wrist-spinners. So lack of practice at a domestic level makes it difficult for them to read us on a bigger stage, I guess.

“There was a time when people went crazy [about] left-arm spinners. Now the batsmen have got very good against them with practice. Somehow, I feel there aren’t enough wrist-spinners in domestic or club cricket [around the world]. Hence, batsmen don’t have enough practice of playing them at the nets.” 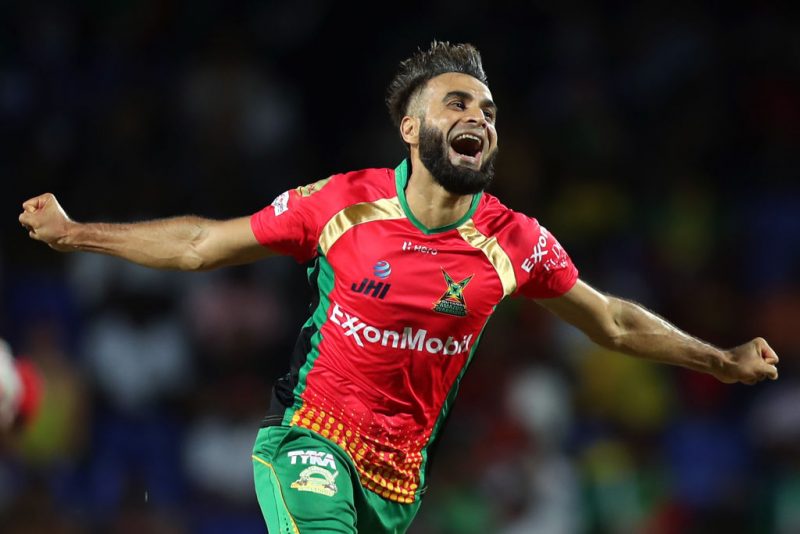 The art of leg-spin has different styles and approaches to it. While Warne relied on drift in the air and keeping it slow to produce sharp turn, Kumble kept it nice and straight, relying on pace and awkward bounce to do the rest. Chahar’s approach is similar to that of his idol, South Africa’s Imran Tahir. Not the greatest of ball-turners, both try to hurry the batsmen with occasional wrong’uns. Their fast, wobbly movements while running in and a quickish release are also striking similarities.

“It used to be Shane Warne in my childhood. Of late, it’s been Imran Tahir,” Chahar said about his heroes. “We played together for Rising Pune Supergiant [in 2017]. I seek his advice whenever I face some problem with my game. When I went to England for U19, I called him up since I had no experience of bowling in those cold conditions. He has played a lot of cricket there and he helped me quite a lot. I keep discussing my game with him.”

Among the highlights of Chahar’s short international career so far was playing for India alongside cousin Deepak in the West Indies. The youngster was happy for the opportunity, but realises that a long path lies ahead.

“It was a special feeling, making my debut with him,” Chahar said. “It was a dream come true for my uncle [Deepak’s father], also our coach, who watched us on television playing together for India. He sacrificed quite a lot for us. The whole family was happy about it, but they want us to keep doing well. This is just the beginning.”