Kolkata Knight Riders seemed to snap a pattern of over-reliance on Andre Russell to defeat Kings XI Punjab rather convincingly on May 3 in Mohali to significantly boost their qualification prospects.

With six wins from 13, Kolkata’s progression still hinges on a couple of other factors as they are vying for one remaining qualification berth with four other teams. Punjab happen to be one of those teams, but with only five wins from 13 games, they need a bit of a miracle – or could have done with more batting depth a little earlier in the tournament.

The most pleasing aspect about Kolkata’s win against Punjab is that they did it without too significant a batting contribution from Russell. They chased down Punjab’s 183-6 with two whole overs to spare, despite the big Jamaican scoring a pedestrian (by his standards) 14-ball 24. Significantly, the Kolkata batting unit is coming good at the business end of the tournament.

Shubman Gill. The 19-year-old’s elevation to the top of the order is paying rich dividends. He followed up his magnificent 45-ball 76 against Mumbai Indians from the previous game with a more composed, unbeaten 65 against Punjab.

Back in his hometown, he put on a display of pretty shot-making. When he brought up his fifty with a delicate late cut off R Ashwin, one couldn’t help but take note. The senior Gill, watching from the stands, broke into all-out Bhangra celebration.

Gill, a star of India’s successful Under-19 World Cup campaign, has already represented the senior side in two ODIs. With his quality, expect him to become a regular in the national side in the years to come. 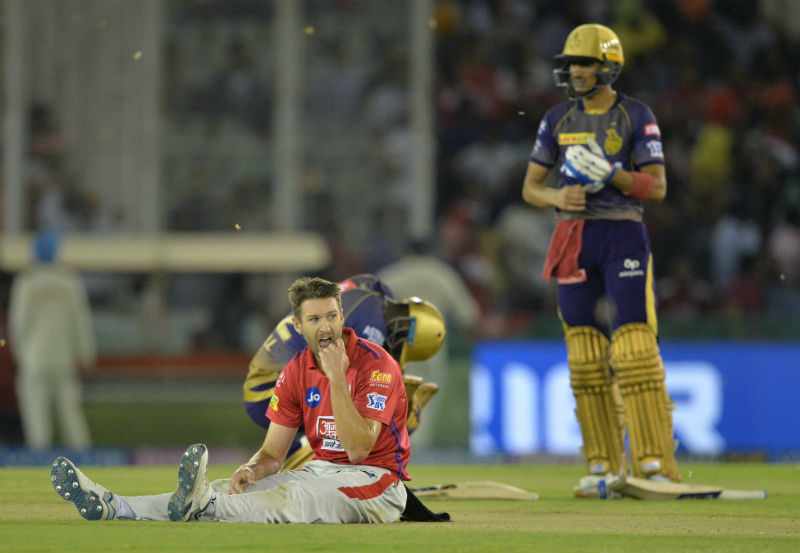 Dropped catches. There have been plenty of straightforward chances put down this IPL; on Saturday there were a couple, one in each innings. Sam Curran was the first beneficiary, enjoying a tame reprieve on 17 when Rinku Singh put down a sitter just past mid-on.

Related Story: ‘There is no fight’ – Gill shrugs off competition with Prithvi Shaw as he eyes Test debut

The drop activated Curran’s beast mode as went on to smash 55* off just 24 balls, 22 off which came in the final over of Punjab’s innings as the young all-rounder smashed Harry Gurney to all parts.

Russell was the next batsman to be dropped with Mayank Agarwal misjudging what should’ve been a simple chance at long-off. Instead he parried the ball over the fence as if Russell needed anyone’s help clearing the ropes. Russell lasted only four more deliveries, but the drop still cost Punjab 10 rapid runs.

“I think he’s a terrific player”

“If you’re doing the Bhangra, your son should play for Punjab”

It's a strong record against the northerners! 💪🏾

Today, let's make that 12 and get those 2 points! Come on, Royals! 🙌🏾 #HallaBol #DCvRR #RR pic.twitter.com/Eba1nUwfiz

A Steve Smith-less Rajasthan Royals fight for survival as they take on Delhi Capitals. Delhi have already qualified, but intensity should remain high as they will look for a spot in the top two.