David Warner is no stranger to controversy, but it has been a while since we were last left debating his behaviour.

The Australian opening batsman has sought to rebrand himself as a grown-up married man who is focused on the game of cricket, as opposed to a player defined by his spiky persona.

But following Australia’s impressive win over South Africa in the first Test in Durban, which was full of brilliant cricket – Mitchell Starc’s reverse-swing master-class, Aiden Markram’s battling hundred – all the talk is about events off the pitch.

That is because of an incident involving Warner and South African wicketkeeper Quinton de Kock as the players left the field on day four for the tea break.

CCTV footage from the pavilion shows Warner being ushered away and held back by his teammates from confronting de Kock, who is alleged to have made personal remarks about his wife.

The ICC is looking into a heated off-field exchange between David Warner and Quinton de Kock on day four of the first Test: https://t.co/oH3kbSexhv https://t.co/L0ilG7Wzla

Both sides have released statements confirming the incident happened, is “not in the spirit of the game” and that ICC match referee Jeff Crowe is investigating.

That of course leaves the cricketing world to pass comment, attribute blame and discuss everything apart from the actual cricket itself.

Gilly- Warner crossed many personal boundaries with the South Africans, so we can’t be surprised when there is eventually a reaction. If players are happy to give it,they have to be prepared to take it,too. On both sides!
But agreed not a good look. #SAvsAUS https://t.co/obTo0GO2H8

The fact that it’s Warner who is involved is important. The 31-year-old has a reputation for playing the game on edges of acceptability: he loves a chirp in the field and is always up for a battle.

The infamous incident in a Birmingham bar when Warner punched England’s Joe Root may have been way back on 2013, and he may have tried to perpetuate the persona of ‘The Reverend’ since, but Warner still is still seen by many in a negative light.

Totally agree Big Bird … If you are going to give it out & many times he has got close to the personal bone he has to expect a comeback … https://t.co/V2IJ37ZXCV

Many people were not sympathetic to Warner, with both former South African captain Graeme Smith and ex-England skipper Michael Vaughan saying that if Warner gives it out, he should be able to handle a return of fire.

And I can tell you that David Warner is very personal. He needs to learn that if he dishes it out he is going to get it back and shouldn’t then behave like a spoilt 2 year old. I agree though not good for the game. https://t.co/0w9Zv3NbPz

Ex-Australian wicket-keeper Adam Gilchrist was one of few to defend Warner, saying “(I) can only assume something very personal has been thrown”.

“Quinton got quite personal and provoked an emotional response from Davey,” he said. “As far as I am aware we didn’t get personal toward Quinton. You can’t be getting into someone’s personal life like that.” 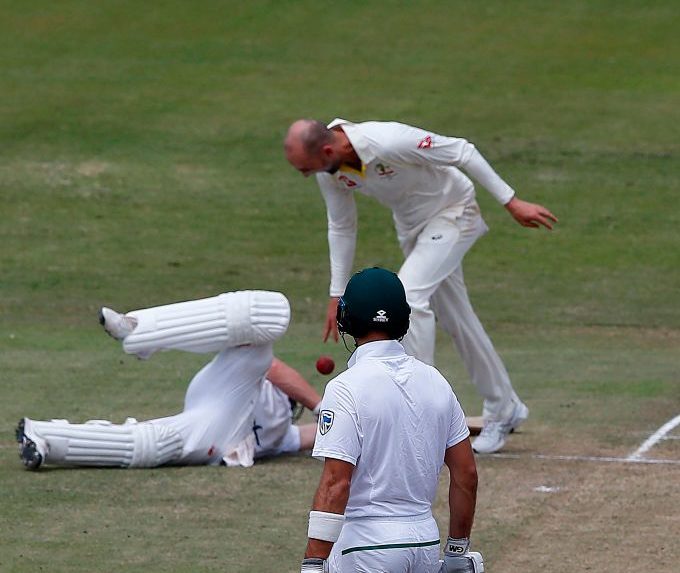 Nathan Lyon has been sanctioned for more poor on-field behaviour

Whatever was said, Warner is likely to join teammate Nathan Lyon in being sanctioned by the ICC. The off-spinner has been charged with a level one offence for dropping the ball on AB de Villiers after running him out on day four.

Australia may have won the Test match in dominant style, but not for the first time the fallout has little to do with cricket.