Plenty of pace and power have been in evidence over the years from two sides still awaiting their first World Cup trophy.

South Africa boast a roster of players who are statistically exceptional at World Cups, but for all their talent have been found wanting in key moments. New Zealand have traditionally been a force when hosting tournaments but struggle to make a similar impact abroad, so often overshadowed by their antipodean neighbours.

One of the best fielders in world cricket, at the 1999 tournament Gibbs famously dropped Steve Waugh celebrating before he had full control of the ball; a moment which signalled a shift in momentum away from favourites South Africa to eventual winners Australia. Gibbs had earlier that game made an authoritative 101. His other World Cup highlights include hitting six sixes in an over against the Netherlands in 2007, the first player to do so in ODI cricket. 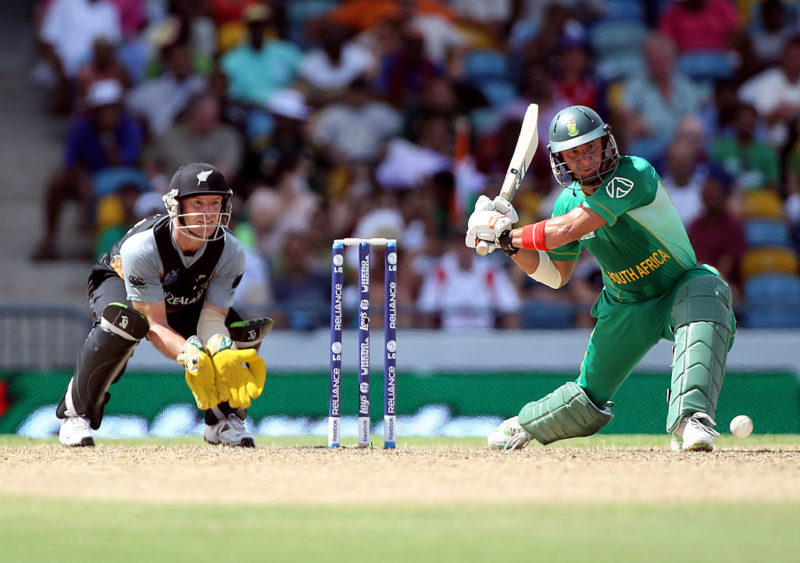 Herschelle Gibbs batting against New Zealand in Barbados on May 6, 2010

Gary Kirsten’s 188* against the UAE in 1996 stood as the record for the highest World Cup score for 19 years. He averaged 78.20 in that tournament and opened the batting with Gibbs at the ’99 tournament hitting 82 against New Zealand. Unable to win the World Cup as a player, Kirsten coached India to their 2011 victory. 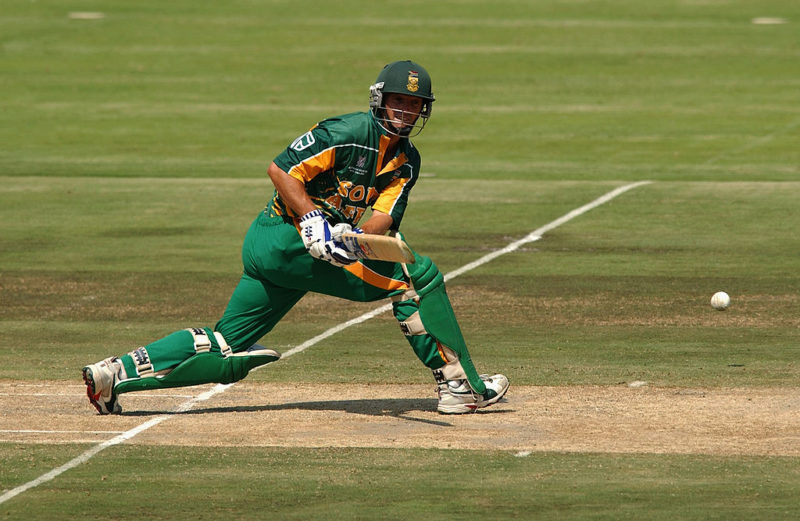 Crowe was the main driver behind co-hosts New Zealand’s run to the ‘92 semi-final. With 456 runs at an average of 114, some inventive captaincy (Crowe was one of the first to open with spin bowlers in ODI cricket as well as an early advocate of pinch hitters) and 100* against Australia led to a hard-earned Player of the Tournament award for the Kiwi skipper. 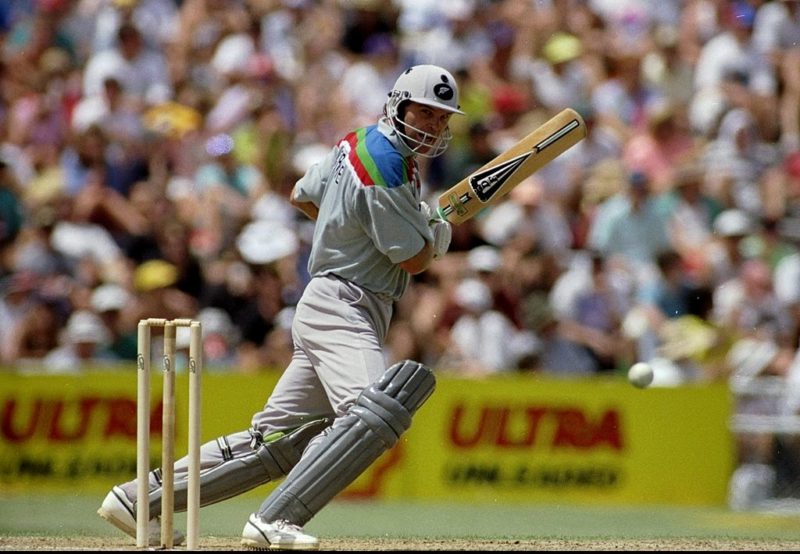 New Zealand’s Martin Crowe on his way to an unbeaten century, 1992

With the second most sixes in the tournament’s history (37) and a strike rate of 117.29, de Villiers was an intimidating presence in World Cup cricket. Serving notice of his talent in 2007 with a punkish 92 from 70 against the all-conquering Aussie side, AB took hitting to hitherto unseen levels in 2015 when he creamed 162* from 66 balls against the West Indies. 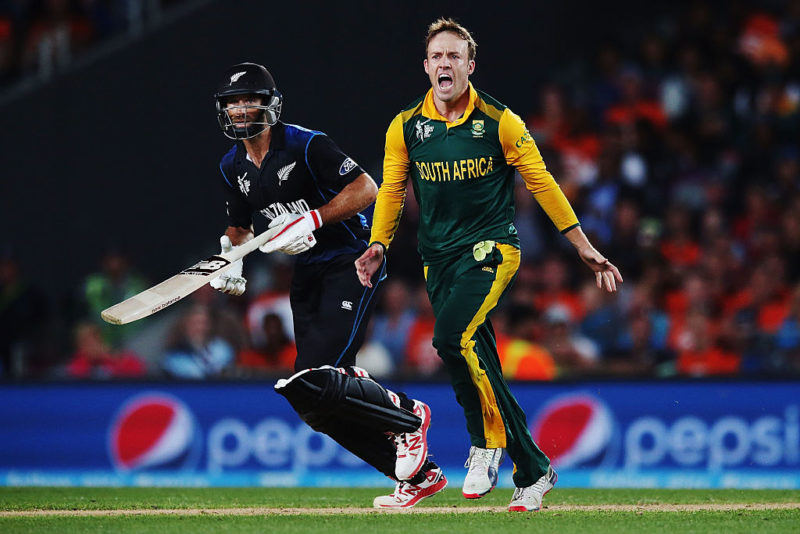 The underrated Styris epitomises many of Blackcap cricket’s qualities. More than the sum of his parts, the all-rounder was a mainstay in the middle order for New Zealand from 2007 to 2011 with two World Cup centuries against the Sri Lankans and a handful of wickets with his crafty medium pace. 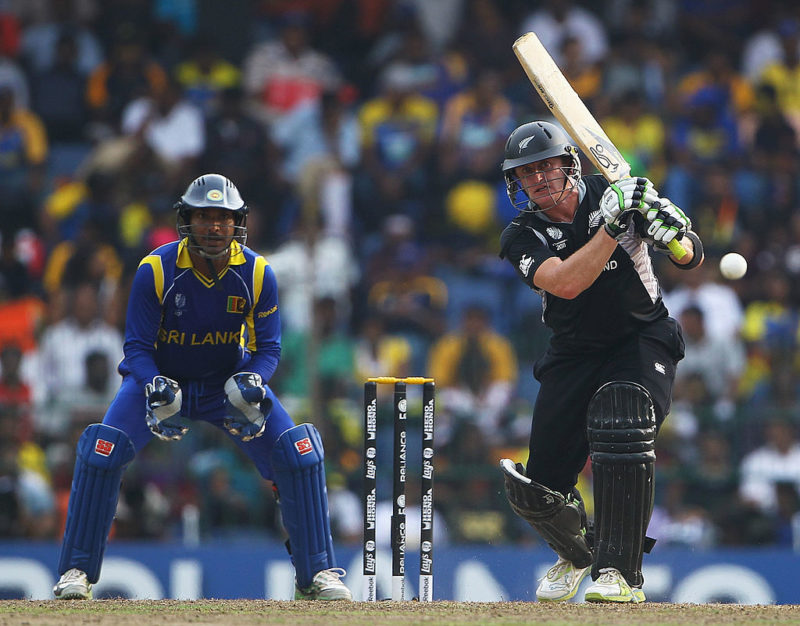 As skipper at the 2015 World Cup Brendon McCullum seemingly cracked the ODI code. New Zealand set out to be ultra-aggressive regardless of match situation and embarked on a breath-taking run to the final. The elevation in modern scoring rates owes much to McCullum’s blueprint. No slouch himself, of batsmen to have hit more than 500 World Cup runs McCullum has the highest strike-rate. 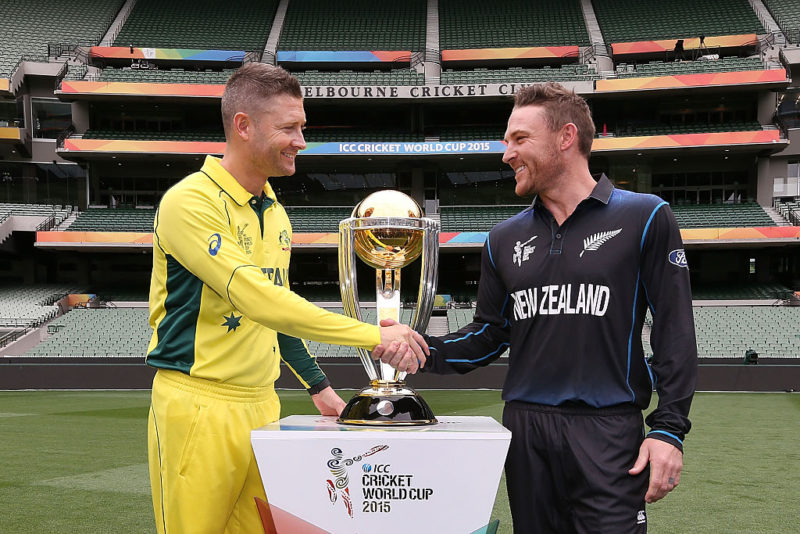 Player of the Tournament at the 1999 World Cup, Klusener was the prototype of the modern, hard-hitting ODI No.7. Memories of the all-rounder can seldom be divorced from that final over in the semi-final against Australia where, having squeezed two yorkers for boundaries, he was involved in the fatalistic run out which led to a tie and the end of South Africa’s World Cup hopes. 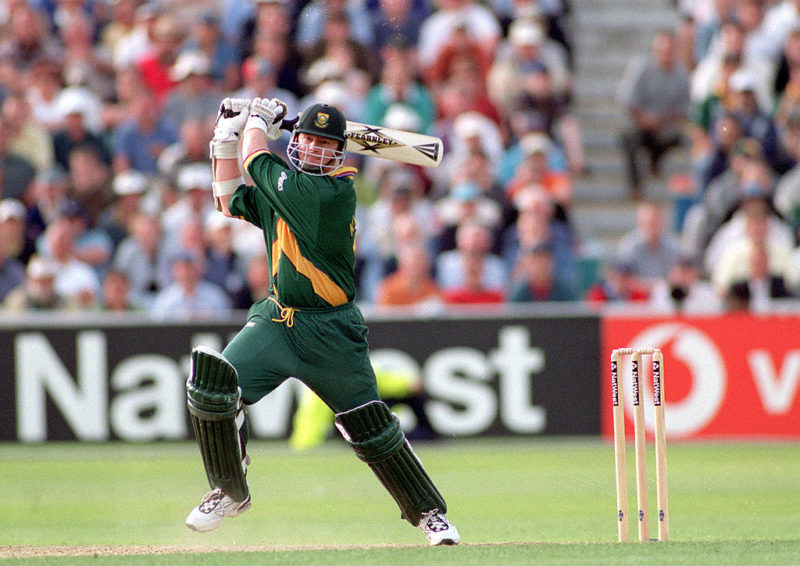 The bespectacled, parsimonious left-arm spinner was an ever present for New Zealand’s 2015 campaign. He took 15 wickets at 20.46, including 4-18 from 10 against Afghanistan, a perfect response to a disappointing 2011 tournament where in helpful sub-continent conditions he could only manage three wickets. 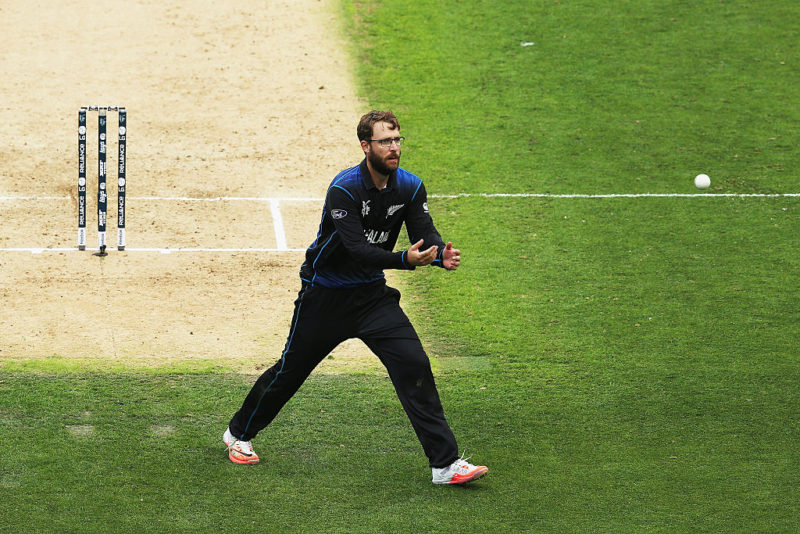 Hadlee played in the first three World Cups and helped New Zealand to two semi-finals. Against Sri Lanka at Bristol in the 1983 tournament the great Kiwi all-rounder took a career best 5-25. 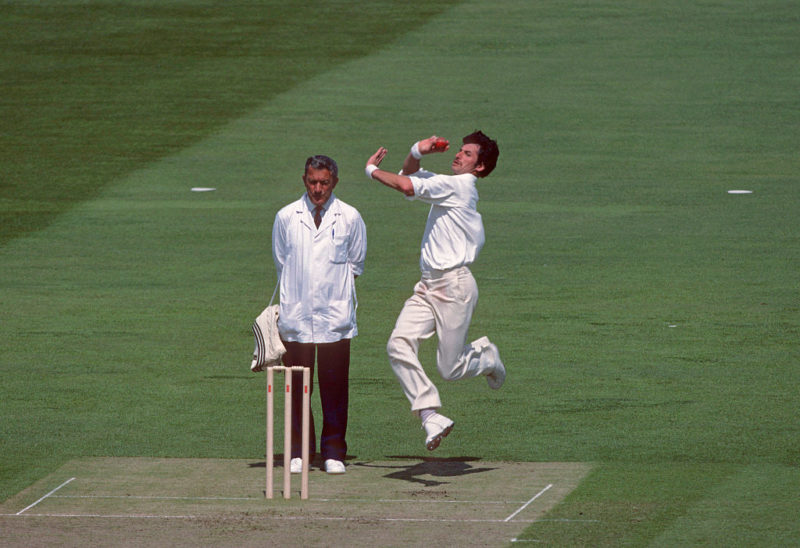 Fast bowler Bond’s injury-ravaged, stop-start career coincided with two World Cups. With 6-23 against Australia in 2003 an undoubted highlight, 13 wickets also came in the 2007 edition of the tournament at less than 20 runs apiece as New Zealand made the last four. 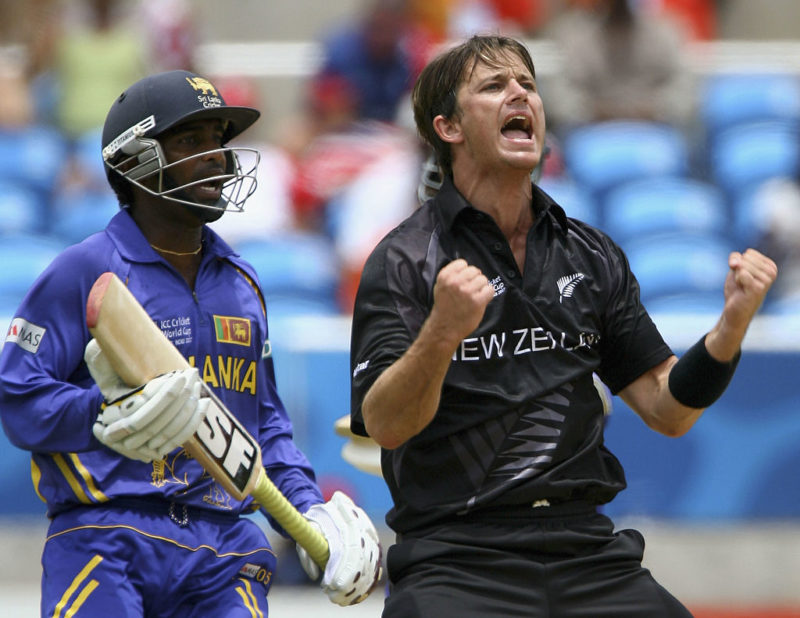 Come the ’99 World Cup Donald was the premier fast bowler in world cricket. It is therefore something of a tragedy that the enduring image of the tournament is Donald batless, stranded miles out of his ground as Adam Gilchrist whips the bails off, running him out and damning that great South African side to a ‘chokers’ epitaph. Earlier in the tournament, the fast bowler known as ‘White Lightning’ struck England with 4-27 en route to the hosts crashing out of their own World Cup. 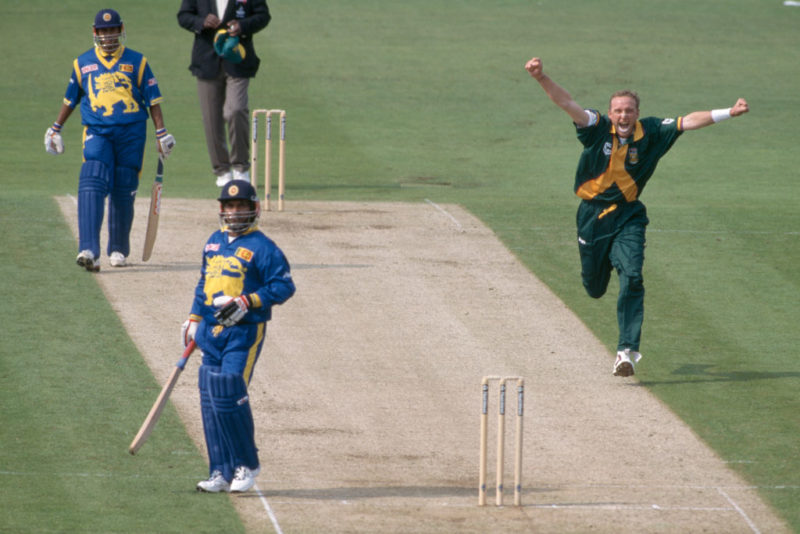