It’s a decade since Test cricket was last played in Pakistan, with international cricket returning there only intermittently in the intervening period. Aadya Sharma takes a look at what top-level cricket has been played in the country since the start of 2010.

A country packed with cricket-fanatic fans was pushed into a sustained period of uncertainty when a terrorist attack forced international cricket out of Pakistan. Ten years later, top-flight cricketers are slowly trickling back in, but there is still some way to go before international cricket is completely reinstated in the country.

“The courtesy, the generosity, the hospitality, the warmth, the love of cricket is plainly obvious for anyone to see.” Last week, Warren Deutrom, CEO of Cricket Ireland, was at the Gaddafi Stadium in Pakistan, witnessing the Sri Lankan team’s visit to the country. Speaking to PCB Podcast later, he promised that Ireland would do their part in international cricket’s reintegration into Pakistan.

The last time Pakistan hosted a Test was in 2009. Their current captain, Sarfaraz Ahmed, hadn’t even debuted in Test cricket by then. For the last decade, Pakistan have been primarily playing their ‘home’ games in the UAE.

It was in 2009 that a horrific attack on the Sri Lankan team bus outside the Gaddafi Stadium, Lahore, forced the suspension of international cricket in the country. It halted operations on a flourishing game that has a huge following, cutting players from the country and its fans, and cutting cricket from a nation brimming with zealous followers of the game.

It started a long-drawn period of isolation for cricket in Pakistan, an untenable situation that only gradually started resolving by the second half of this decade.

Years later, top teams are slowly inching their way back into the country – the latest being Sri Lanka – as Pakistan continues to try and push past the events of 2009.

May 2015 – Zimbabwe: The cautious first steps 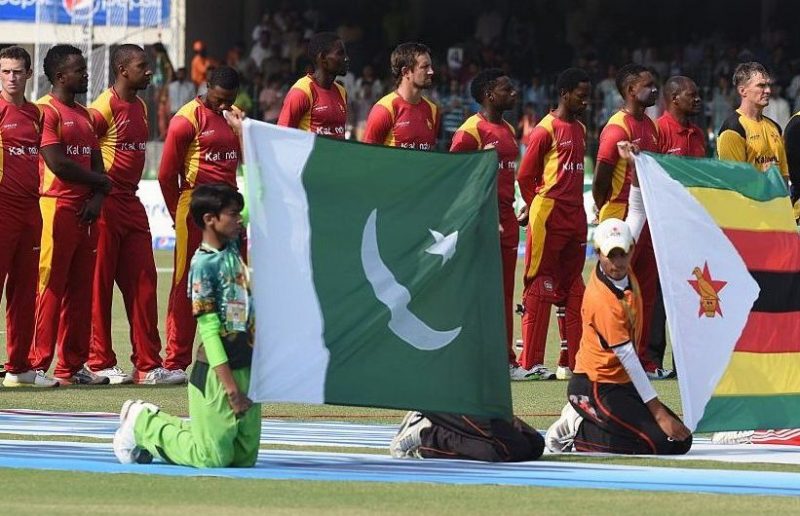 Six years after the 2009 incident, Zimbabwe became the harbingers of international cricket’s return when they agreed to a limited-overs tour of the country. They became the first Full Member to play in the country since 2009. Afghanistan and Kenya had also travelled in 2013 and 2014, but those tours weren’t awarded international status.

The series might have been lopsided – Zimbabwe failed to win a single game, losing both the ODIs and T20Is 2-0 – but it did its part in breaking the limbo with captain Misbah-ul-Haq calling it a “a big joy for all of Pakistan cricket fans.”

“We are so grateful to the Zimbabwe cricket board for sending their team and for trusting us,” Subhan Ahmed, COO of PCB had said then.

However, while a bomb blast outside the Gadaffi Stadium during the second ODI didn’t curtail the tour, it did demonstrate how far there was to go before normal service could be resumed.

Not long after men’s cricket returned to Pakistan, women’s cricket did too, with Bangladesh playing two T20Is and two ODIs in Karachi – Zimbabwe’s games had all been in Lahore.

The tour went smoothly and was competitive too, with the tourists coming within 20 runs of winning the first ODI. Bangladesh skipper Salma Khatun was at pains before the tour to stress that her side hadn’t been pressured into travelling.

“We are going according to our wishes,” she said. “We will be given the highest level of security. We are going there to play cricket, so we are not concerned about what is happening anywhere else in the country. We wanted to tour any country to play cricket, since we haven’t played any matches since the 2014 Asian Games in Incheon. There is no fear among us. We know that there won’t be any trouble in the area where we will be playing.”

While not an international match, the 2017 Pakistan Super League final was undoubtedly the biggest game played in Pakistan since 2009, and the biggest gamble too. An increase in terrorist attacks led FICA, the international players’ union, to strongly advise against all travel. “An acceptable level of participant safety and security cannot be expected or guaranteed,” read a statement.

The stakes were high. “If something inimical happened on the final day then it will prove to be the end of international cricket in Pakistan,” said now-prime minister Imran Khan, and several players, including Kevin Pietersen, Luke Wright, and Tymal Mills, refused to travel.

Those who did remained wary, but when they took the field realised the rewards of playing in the country. “It was as good an atmosphere as I’ve ever been involved in,” said Dawid Malan, who did travel, as did compatriot Chris Jordan, and West Indians Daren Sammy and Marlon Samuels. “It’s a massive stadium, the middle is quite a long way from the stands, and when they were doing the Mexican wave I was just standing there and thinking, ‘Wow, this is as loud as I’ve heard’.

“It was the first time I’ve stood on the boundary and heard the crowd chanting my name. You could see how much it meant to the people of Pakistan. Even with the security fears, to turn up and still be in such good spirits and create that atmosphere… as a player, it was fantastic.”

“I am glad I came to experience the atmosphere here [in Lahore],” Sammy later said. “Even though Peshawar came out on top, cricket was the real winner in Lahore.” 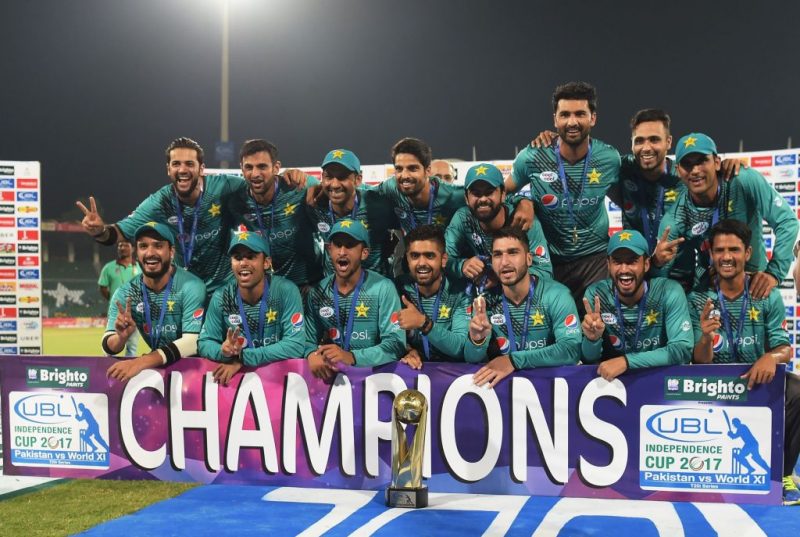 The symbolism could hardly have been made more clear: Pakistan was once again open to the world. A T20 match-up between that year’s Champions Trophy winners and an assortment of global stars from the rest of the world further bolstered Pakistan’s credentials as an international venue. Captained by Faf du Plessis, a World XI side played the home side in a three-match T20I series, which they lost 2-1.

The ICC accorded the series full international status, speeding the return of top-flight cricket in the country.

“A lot of courage was needed on the other side to put it all together,” Najam Sethi, Chairman of PCB had said then. “We are very, very happy to host the World XI and we know this is a small step in many ways but a huge leap for Pakistan.”

Eight years after the Lahore attack, Sri Lanka made their way back into Pakistan, albeit only for a solitary match. It was the final match of their three-match series, with the previous games, as well as the ODI leg, having being played in UAE.

There was scepticism still, given that a chunk of players decided not to travel to Pakistan, but Thisara Perera, named captain for the game, supported the move wholeheartedly.

“It’s nice to be in Pakistan again,” said Perera, who was also part of the ICC World XI, had said. “We are thankful for a warm welcome and will do our best to entertain the crowd with some good cricket.”

Having hosted the PSL final in Lahore in 2017, the PCB pushed for a greater chunk of the tournament to be played in Pakistan, but had to settle for another standalone showpiece. That tickets for the final sold out in three hours demonstrated that cricket’s absence had only made Pakistani hearts grow fonder. The game, held in Karachi, saw elaborate security arrangements in place, with as many as 8500 security personnel employed for the Islamabad United-Peshawar Zalmi clash, which United won. 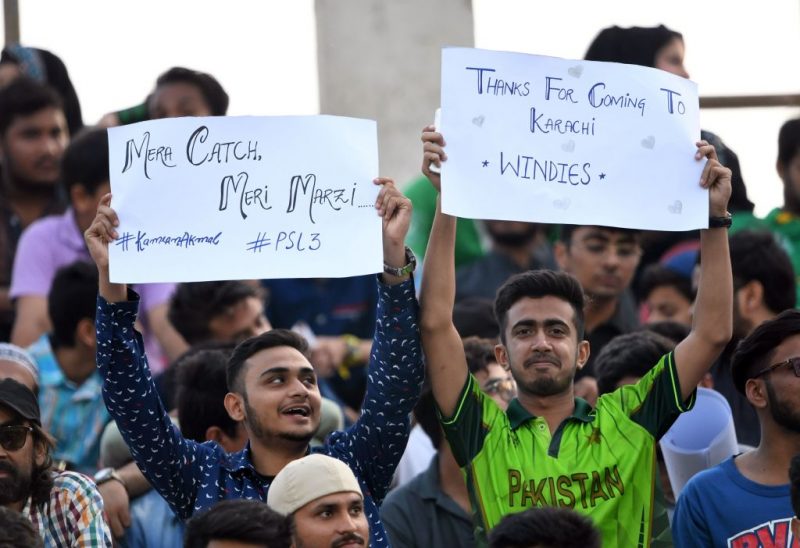 West Indies became the third Test playing team to visit Pakistan this decade, when they decided to tour the country for a short T20I series. Big names decided to step away once again, including the likes of Chris Gayle, Carlos Brathwaite and Jason Holder, but the show went on.

Pakistan completed a comprehensive sweep of the three-match series, winning each of the games with appreciable margins. And while there were questions asked about the strength of the West Indies team that visited, captain Sarfaraz Ahmed stood right behind his team and the crowd.

“We played better cricket and credit must be given to our side. It would be wrong to say that a ‘B side’,” he later said. “I don’t think teams have any excuses left for not coming to Pakistan anymore.”

A tied three-match series, featuring a tied second game, represented the most closely-fought encounter in Pakistan for a decade. Featuring Pakistan Women’s 100th T20I, and Sana Mir’s 100th cap too, it was a proud moment for a proud country.

March 2019 – The PSL final stages: A greater slice of the action

The holding of nine games in Pakistan, even in the wake of heightened military tensions with India, represented an important step towards the stated aim of holding the entire Pakistan Super League in Pakistan. The closing of Lahore’s commercial airspace put paid to hopes of holding matches outside Karachi.

Sri Lanka returned yet again, this time for both ODIs and T20Is. The two sides were supposed to play Test cricket as well, in accordance with the World Test Championship, but the absence of big Sri Lankan names, who decided to give the series a miss, forced the boards to agree on a limited-overs only affair.

It wasn’t the first XI Sri Lanka would have hoped for, but they still managed to clinch a historic T20I series win in the country, after having been pipped in the ODI format. The arrangements got a further thumbs up from Sri Lanka’s interim coach Rumesh Ratnayake, who termed it as a message for other teams to engage in international cricket with Pakistan.

“To experience the hospitality of Pakistan is a great thing,” Ratnayake said last week. “I’ve experienced it after a long, long time, and if anything, it’s got even better. It was a lot of hard work for the whole system to have us here.