In issue 6 of Wisden Cricket Monthly, published in April 2018, Bob Willis, who passed away on Wednesday, December 4, aged 70, talked Phil Walker through his career highs and lows.

Falling for the game

My first recollection of cricket was watching Brian Statham bowl for Lancashire in the mid-1950s. He was an early hero of mine – efficient, non-demonstrative, hard-working – who often didn’t get the praise he deserved. Statham was definitely a role model for me and someone that I hoped I could live up to. Having grown up in Stoke d’Abernon in Surrey, I joined the local club and then went on to Avorians and Old Guildfordians before moving on to play for Surrey Schools, where the club first scouted me.

I went on a Surrey and Middlesex under 19s tour to Pakistan, which was very much an eye-opener, and from there I had a trial season at Surrey for the princely sum of £12 10s. Apart from a little bit at the Alf Gover School in Wandsworth, I never really had much coaching. But by that point I knew I wanted to make a career in the game. I went for a trial at Surrey, and came up through the ranks to the senior side. Not bad for a lad who started out knocking a ball around in the garden with my brother.

When I first broke through into the England set-up, John Snow had a massive influence on me. I’d been selected as a young bowler to tour Australia for the 1970/71 Ashes. I looked up to him and he took me under his wing. Snowy was a wonderful player with a big personality – an enigmatic guy and a great character. I saw him as a guru, although the guys at the MCC – who ran the game in those days – never seemed to be happy with his behaviour.

It was 1970 and at that stage I was playing as a goalkeeper for Cobham alongside my cricket career. I had made my first-class debut the year before against Scotland, but Robin Jackman and Geoff Arnold had kept me out of the team so progress was slow. I was down at Crystal Palace FC’s academy when I got a phone call from Ray Illingworth and Colin Cowdrey to say that Derbyshire paceman Alan Ward had got injured and I was asked if I could go out to Australia to join up with the Ashes tour. 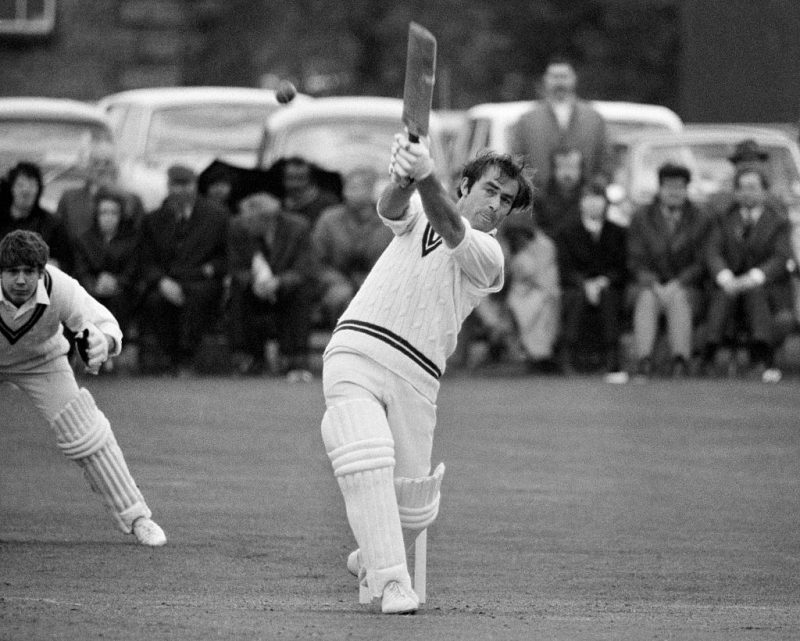 There was no way it was a wind-up. I could tell it was genuine, and I have John Edrich, my teammate at Surrey, to thank for it. John knew about me and my bowling and had been pulling the strings to make sure I was the first in line to get the nod. It was a complete bolt from the blue.

I made my debut in Sydney in January 1971. It was the fourth Test, the series was level after two draws and one Test that was called off, so there was a lot of pressure. I got my first Test wicket and England won, and I remained in the team for the fifth, sixth and seventh matches. We won the series 2-0 after I had got five wickets in the fifth Test. And that was that, the start of my international career.

Daring to move on

Being a fast bowler on that pitch at The Oval was pretty hard work, so guys who could move the ball around more than me like Geoff Arnold and Robin Jackman got picked in front of me. I wasn’t a regular in the Surrey side, so I decided I should look to move on.

Arnold and Jackman opened the bowling, Stuart Storey took the all-rounder spot and we had two spinners – Pat Pocock and Intikhab Alam – so my opportunities became very limited. It was when playing with Jackman in a second XI game that I realised my time at Surrey was at an end. I moved to Warwickshire in 1972, and spent 12 years there. It was very draconian in those days – I had to sit out half a season before the registration went through and they let me play.

Coming back from injury

You could say that my career can be split into two halves – before my injury and afterwards. I collapsed at a county game in 1975 with a recurring knee injury and had to have three operations to put it right. When I came back from that I was forced to rely on crutches. There were intensive daily gym sessions and monotonous laps of the field to rebuild my fitness. 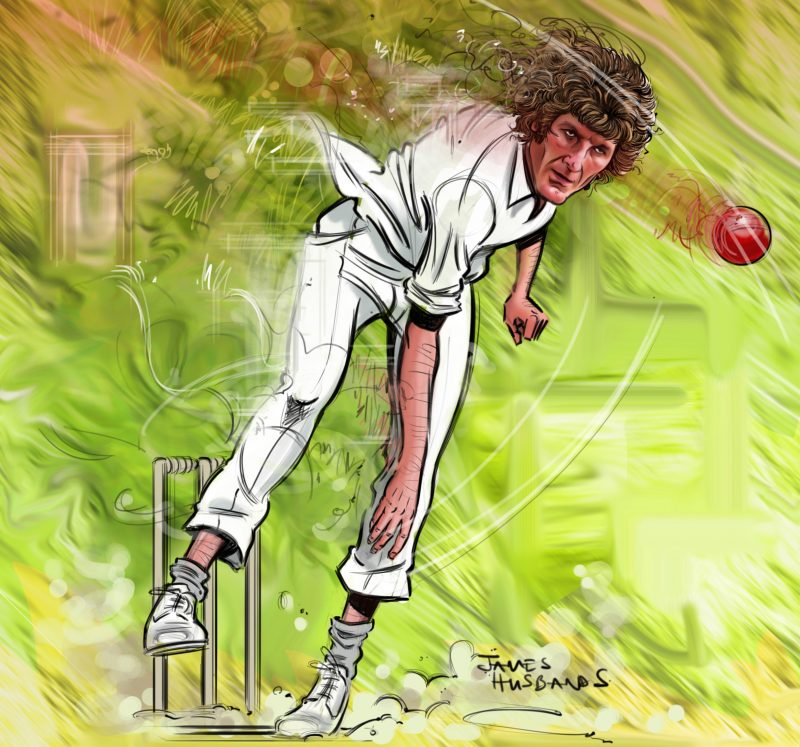 This feature first appeared, along with this illustration, in Wisden Cricket Monthly magazine

That was one of the toughest moments of my career. It was the first setback that I’d had and the recovery was horrible, tortuous. I didn’t know how to deal with everything that it entailed.

It worked out well though. I remodelled my bowling action, developed a bit more pace and played well in my first Test back, where I picked up eight wickets in the fourth Test against the West Indies. I went from one of the worst moments of my life to one of the best, all in the space of a few months.

I enjoyed bowling against the West Indies, despite the fact they were the dominant force at the time, a brilliant world-class team with formidable batsmen. They often battered and humiliated us, but I always enjoyed the challenge of pitting my wits against them. There was the 1973 Test at Lord’s, which also coincided with another return from injury, and I took my career-best at that point, 4-118. Sobers made 150 not out, but that match made me believe I belonged at the top level.

Headingley 1981 is the one game everyone remembers. I’m asked about that more than anything else and of course that was incredible and will live with me forever, but there were plenty of other memorable and unforgettable moments from my career.

I never thought of myself as a natural leader, so I was quite ambivalent towards the captaincy, but to be awarded the chance to captain my country was of course a very proud moment. By this time, myself and Beefy [Ian Botham] had struck up a devastating partnership. We rolled New Zealand and Pakistan for not a lot in ’78, and we were also very potent during the Ashes tour later that year.

But it wasn’t always fun. There were some testing times and the New Zealand series away in 83/84 springs to mind as one of the most difficult. Beefy had become a household name by then, and life became very different for us as cricketers after that – it was tough on him and tough on myself.

Sir Viv Richards was the best batsman I faced by a mile, absolutely no question. Viv is a great person and a lovely man but when he walked out to bat you could feel that he had this aura, a fear factor about him. It was very difficult to overcome, and even if you bowled a good ball he could destroy you. The bad balls would always go for six and he could win a match on his own – an absolute master. 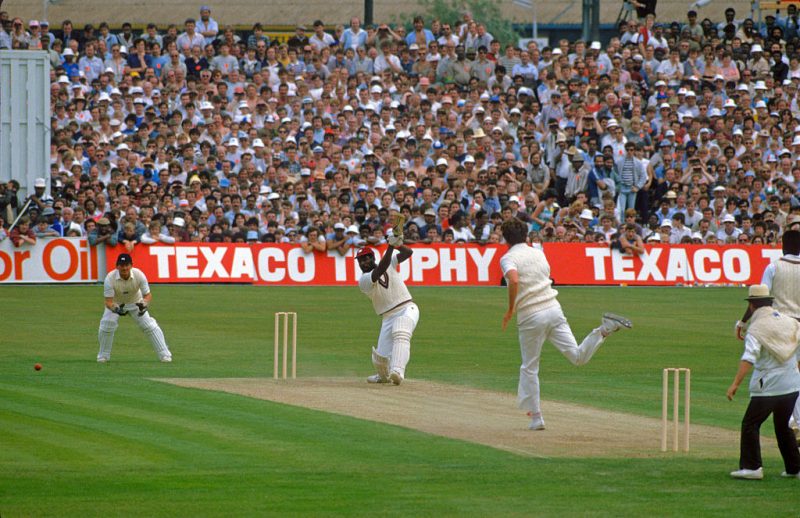 There were other players I struggled against, such as Garfield Sobers, Greg Chappell, Allan Border and Sunil Gavaskar, all of them were magnificent batsmen and brilliant players, but there was just something about Viv that made it almost impossible to bowl to him at times. He is by far the best opposition player I came across during my playing days.

In terms of the greatest ball I ever bowled in my career, you might immediately think of Headingley. But there is one that instantly springs to mind, and that was the one to dismiss Martin Crowe, one of the best players there has ever been, at The Oval in a Test match. It was pitching middle stump but took out the top of off stump, and that was quite unusual for The Oval as it was a flat deck back then.

I’ve been banging on for decades that we need an overhaul to improve the standard of county cricket. My solution is a fairly simple one: there should be three divisions of six teams, I would play the first 16 weeks of the season, 10 County Championship matches and six Tests, with all England players available for county selection in those 10 matches.

They wouldn’t necessarily be picked, that would be down to the coaches, and I would have both the new and the existing county Twenty20 tournaments played at the same time across a five-week period, and then a brief and truncated 50-over competition at the end of the season in September. The school holidays come around and we can get kids involved in the T20 jamboree, at city or county level.

Apart from the World Cup I believe that Twenty20 is going to take over from the 50-over form of the game – that’s something we need to accept, and have an intense but more meaningful limited-overs tournament. It’s ridiculous that England are going to be in the thick of a Test series when the new T20 competition [now The Hundred] is going on. It’s a new innovation and you want the star players to be there.

This article first appeared in issue 6 of Wisden Cricket Monthly.