On Wednesday evening, Leicestershire skipper Colin Ackermann recorded the best-ever T20 figures by a bowler, returning 7-18 in the 2019 T20 Blast against Birmingham Bears.

“I can’t actually believe it” – it’s a thought most would share. Ackermann nor anyone who has observed his game closely would have ever thought that the South African – a batsman who can chip in with some handy off-spin – would have a seven-wicket haul in his locker.

“I obviously bowled one over in the Powerplay but that is very much a case of getting in and out of your over,” Ackermann tells wisden.com as he talks through his four-over spell that helped Leicestershire to a 55-run win. “I had two boundary-riders in the leg side, so the plan was to bowl tight to the stumps and restrict the boundary options. I managed to pick up the wicket of Michael Burgess, who looked to give himself room over the infield on the offside, but Harry Dearden took a really smart catch.

“Coming back into the attack it played into my hands; the required run-rate was high and the batsmen had to keep playing. I was able to be quite attacking and take more risks, plus the wicket had turn for possibly the first time ever at Grace Road, which helped!”

Prior to the match, Ackermann had just 31 T20 wickets from 89 matches and in last season’s Blast campaign, his 14 appearances resulted in just nine overs bowled. Nonetheless, one by one, with his dartish offies, Birmingham’s batsmen were picked off. Three of his seven wickets were bowled, highlighting his accuracy.

Out of the seven – plenty to choose from – Ackermann picked his first scalp as his favourite of the night.

“I think my first wicket was my favourite. The stage of the game was crucial and when defending a big total early wickets are key to momentum and putting pressure on the new batsmen coming in; so yes, the first wicket is the one I cherish the most.” 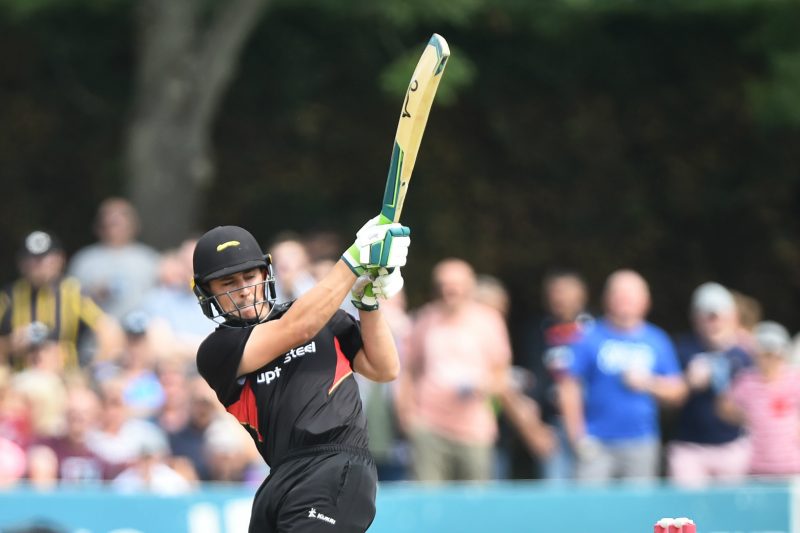 Harry Swindells made a brisk 50-ball 63 including six fours

Leicestershire’s spin situation was rather different last season, with the talented Mohammad Nabi, Afghanistan’s ace spin-bowling all-rounder, in their ranks.

But in the absence of Nabi this year, Ackermann has taken up a more active role with the ball, and admitted that his team had worked on introducing more spinners during the Powerplay, a risk which has reaped rewards.

“Last year we were also reluctant to bowl more than one over of spin in the Powerplay but we have identified that to be an area we can rectify this year and we are willing to take a few more risks as it can be effective,” says the 28-year-old.

"Never in a million years [did I think I'd create a world record]. I’m a batting all-rounder."
Colin Ackermann reacts👇https://t.co/feDyOUmz3X

“The coaching staff has put me under pressure to bowl a bit more and last year we were almost spoilt for choice with spin options; Mohammad Nabi is a proven world-class bowler, and in young Callum Parkinson we had two wonderful spin options in T20.”

It hasn’t been plain sailing for the most successful domestic side in English T20 history this season, who have no overseas professionals in their ranks for the Blast. But the door has been opened for some youngsters to make their talents aware.

“You saw last night young Harry Swindells [who scored a 50-ball 63] made his first match-winning contribution to the side and it is extra special when these guys come in and contribute. We have a proud history of developing our own youngsters and I know it is something the coaching staff are keen to carry on. And if they play like Harry did last night, long may it continue.”

A teammate of Ackermann in South African domestic cricket is Essex off-spinner Simon Harmer, someone who has helped him develop his bowling.

“Working with someone like Simon is a huge benefit, I have watched him bowl for seven or eight years and we often talk about off-spin bowling which helps.”

After last night, it might be Harmer who comes to Ackermann for tips on how to bowl in T20 cricket.