ICC Chief Executive Dave Richardson believes that “the ratio is about right” for the number of teams at this year’s Men’s World Cup, but that the number of sides at the T20 World Cup will increase “in the not too distant future”.

Richardson has defended the ICC’s choice to decrease the number of teams at the World Cup after the 2015 edition of the tournament featured 14 teams.

Speaking in issue 18 of Wisden Cricket Monthly, Richardson said: “It’s important that we have a global event that’s the pinnacle of each sport and it’s always been about top-quality cricket. 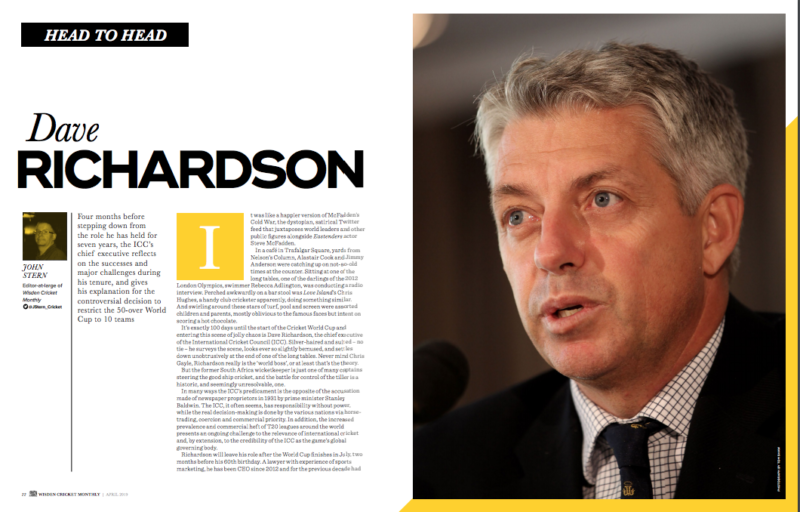 “Qualifying for a global event should be about the best teams getting there and for me the ratio is about right.”

Richardson added that the T20 World Cup can be the competition which allows less renowned cricketing nations to flex their muscle on a world stage.

“Where we want to globalise the game is the T20 competition. We’ve given T20 international status to all member countries and that’s maybe where we maybe need to increase the number of teams in our pinnacle event. So you’ll see that go from 16 to 18 to 20 in the not too distant future.”

Richardson has also not closed the door on the number of teams at the 50-over World Cup increasing again in the future. “If we can grow the game that way [through T20Is] then hopefully there will be more members playing 50-over cricket and we’ll be justified in raising the number of teams in our pinnacle event.”

Related Story: Why cricket should be played at the Olympics

He also said that while Test cricket is a “niche market”, he sees the potential for further growth in the number of nations playing the longest form of the game.

To read the full interview with Dave Richardson, pick up a copy of issue 18 of Wisden Cricket Monthly