Usman Khawaja, who scored an outstanding fourth-innings century to deny Pakistan victory in the first Test in Dubai, garnered praise from both the captains – Sarfraz Ahmed and Tim Paine – after the game.

“Credit goes to Usman Khawaja. He really was a lone warrior and it’s because of him that this match was drawn. The way he batted, all credit goes to him,” said Pakistan skipper Ahmed, after his team failed to pick up the last two Australian wickets before stumps were drawn.

“On a fifth day, it’s not easy to bat on these kinds of pitches. With all the rough patches it was very difficult to bat.”

Pakistan captain Sarfraz Ahmed was full of praise for Usman Khawaja after his match-saving 141. #PAKvAUS

It wasn’t just Khawaja, of course. Debutants Aaron Finch (49) and Travis Head (72) contributed in the early part of the resistance, and Paine held on towards the end, scoring an unbeaten 61. “Tim Paine deserves a lot of credit as well. I’m very disappointed with the result but today cricket is the winner,” said Ahmed.

Paine, whose captaincy might have been questioned again had Australia lost, was equally effusive in his praise for Khawaja, whose 141 is the highest individual fourth-innings score in the UAE.

“I think Usman played one of the best innings you’ll ever see anywhere in Test cricket,” said Paine. “On that wicket on day five, he really showed guts and determination, but he also showed the high level of skill he’s got. While he was there I was always confident that we could get through.

What a fightback today in Dubai!

“It was an amazing innings, full of everything you’d want from a Test match innings. People will talk about how much he fought and the conditions, but it was amazing batting with him to see just how good he is in that skill sense.”

Pakistan had a tight hold on the game after Day 4, when they managed to reduce Australia to 136-3 while in pursuit of a 461-run target. However, the visitors scripted a strong comeback on the final day to end on 362-8.

While Paine was pleased with the resistance shown by the batsmen, he recognised that there were areas of concern. 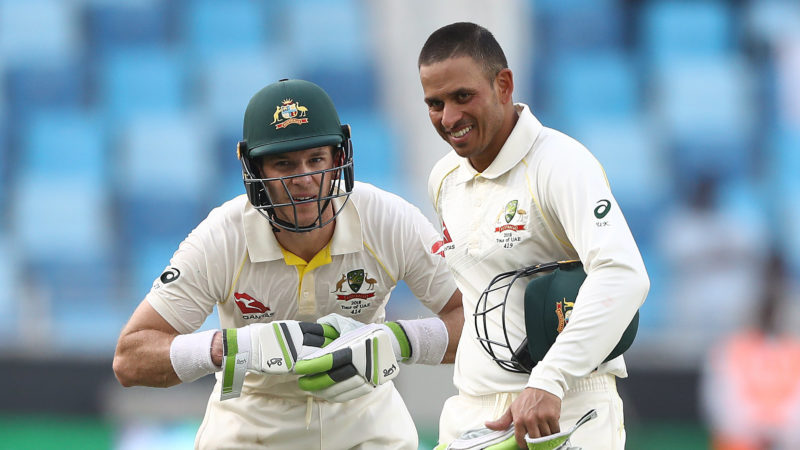 When asked if pulling off the draw was like a win, he said, “It doesn’t feel like a win. We were outplayed. We’re proud to get something out of it, but we can play a lot better in the next Test.”

“It was a really tough five days. Pakistan played outstandingly well and put us under pressure from the first day. For us to get a draw out of that from where we came from at one stage on the third day is an outstanding effort from our group and we can be very proud of that.

“We want to be a team that fights all the time and never gives in. I think we can take a lot of belief out of what’s happened in the last few days and take that through to the next Test with confidence.”