England and Australia are three games into their ODI series Down Under, but a little further south the countries’ junior sides are about to go head-to-head in a key knockout match.

They face each other in Queenstown, New Zealand for the quarter-final of the Under 19 World Cup on Tuesday (21.30 Monday night, GMT) in what promises to be a fascinating encounter. After a succession of mallings of minnows by the full member sides throughout the group stages, tonight’s clash is set to be a battle of equals.

England are undefeated in the tournament so far, with comfortable wins in each of their three group games. Their batsmen in particular have made a mark , with hundreds from Liam Banks, captain Harry Brook and Will Jacks the highlights. Their bowling attack has also shown variety and versatility, with 10 English bowlers claiming at least one wicket so far.

Australia won two out of three in the groups to finish second in Group B, after India dispatched them by 100 runs in the opening game. .On that occasion the pace of Indian tearaway Kamlesh Nagarkoti proved too hot to handle. However they went on to beat Papua New Guinea by 311 runs after Jason Ralston claimed 7/15, the best-ever figures at the ICC U19 CWC. 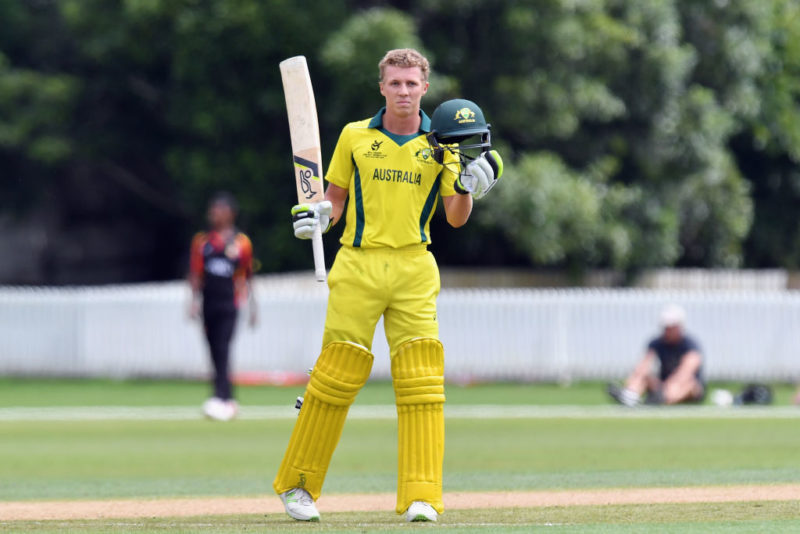 A magnificent ton against Canada and an unbeaten 73 versus Namibia mean Surrey all-rounder Will Jacks is in excellent form heading into this match against the old enemy. His Canada century (102 from 82 balls) came as part of a gargantuan 383-run team total.

For the Aussies, highly talented opening bat Nathan McSweeney is one to keep an eye on. In his one knock so far he smashed 156 runs from just 111 balls against Papua New Guinea and looked excellent while doing it. England will be keen to see him off early.

This quarter-final is the 36th time the nations’ under 19 outfits have faced each other, with Australia having won 23, England 11 and one no result. Most recently, in 2015 in Worcester, England won by four wickets with two balls to spare.