“We are not looking to compete anymore. We are looking to win,” announced Marlon Samuels shortly after the West Indies beat India by 43 runs in Pune – it was telling of where the visitors see themselves at the moment.

While they were blown away in the two-match Test series, they have fought back hard in the ODIs so far. They were beaten by eight wickets in the first match, but have since eked out a tie in Visakhapatnam and then beaten India in Pune.

With two matches left, there is parity in the series, and the ninth-ranked team in the world have more than just troubled the No.2-ranked side. 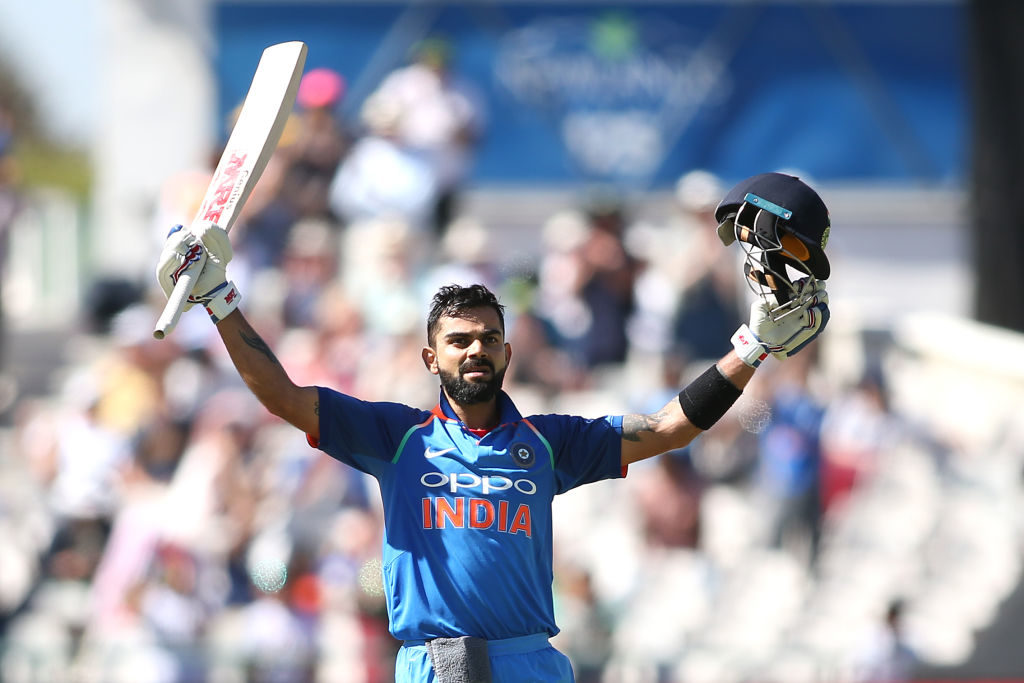 Virat Kohli completed a hat-trick of ODI centuries in Pune

Related Story: Men’s T20I innings of the decade, No.2: Marlon Samuels, on his own

Then, to nobody’s surprise, Virat Kohli pegged them back with a third consecutive century, but the West Indies ensured the other end was never settled – they kept taking wickets, and when Samuels was brought on late, and he had Kohli cleaned up, and the West Indies knew the match was in the bag.

Samuels was the wildcard that came good, but he was all praise for Hope. “Sitting in the dressing room and watching Shai Hope batting the way he has been batting, we have been having a lot of conversations about how to score runs in India,” said Samuels.

Pune 💯 ✅@imVkohli with three ODI centuries in a row, the first India batsman to achieve the feat!! pic.twitter.com/X5Zwma8QMe

“To be watching him doing the things we have been talking about him doing is just wonderful. He is going from strength to strength and he is definitely one for the future.”

"We gave a little bit of runs in the end, so maybe, that could be the difference"

There was also praise for young Hetmyer, who has shored up their middle order with scores of 106, 94 and a quickfire 37 in the series so far. “What you can see is (Hetmyer) is fearless and he is brave, he is going to get there with consistency and choose the right moment and choose the right bowlers,” said Samuels.

“He is another youngster who asks a lot of questions. So, I guess he is hungry, and you should look out for big innings from him as well.”

As for India, there was evident disappointment that they had let the match slip, despite being in winning positions at various points.

Jasprit Bumrah’s 4-35 had, in fact, made victory seem inevitable at one stage, but he said an inability to shoot out the lower order had come back to bite them.

“We bowled well as a unit, till the 35th over, we were pretty good,” said Bumrah. “Yes, we gave a little bit of runs in the end, so maybe, that could be the difference. But overall, the bowling performance was not bad. They played well, and you have to give credit to the batsmen.”

Progression is a must. 💯 pic.twitter.com/NvnKF62q8g

Bhuvneshwar Kumar came in for particular scrutiny. The reliable swing bowler was a bit off his game on Saturday – he conceded 70 runs from his 10 overs, and didn’t take a single wicket.

Bumrah, however, threw his weight behind his partner. “Bhuvi had a good start, but at times, things (go a bit off) towards the end,” he said. “It happens. Bowling at the death is difficult.

“It is not like every bowler will have good days. You cannot differentiate. He gave a bit of runs in the end, but they batted well. Jason Holder is also an all-rounder. He batted well down the order.”

It all sets up the series enticingly – the fourth ODI will be played in Mumbai on Monday.