A stump from the 2011 World Cup quarter-final, in which India beat Australia on their way to the title, is up for auction as part of efforts to raise funds for those affected by the Australian bushfires.

Yuvraj Singh, the Player of the Match that day in Ahmedabad, and Sachin Tendulkar have both autographed the piece of memorabilia, which is being auctioned off on eBay by Cricket Australia.

Yuvraj, who went on to be Player of the Tournament even as he battled severe health issues, struck 57* in that match, while also picking up two wickets. That, along with half-centuries from Tendulkar and Gautam Gambhir helped the hosts chase down a target of 261 with five wickets to spare. 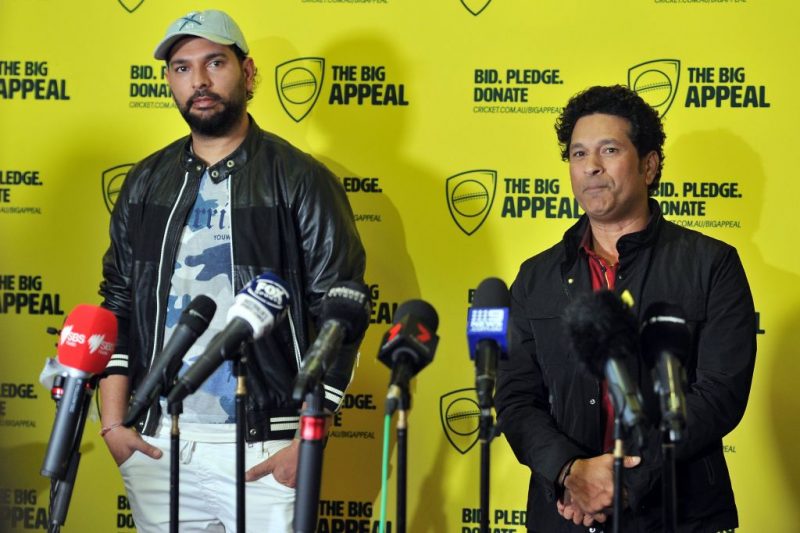 Both Yuvraj and Tendulkar are part of star-studded relief efforts in Australia, with both involved in Cricket Australia’s ‘Bushfire Cricket Bash’. The former India all-rounder will join Courtney Walsh, Alex Blackwell and Shane Watson in Adam Gilchrist’s side for a 10-overs-a-side match against a Ricky Pointing XI – coached by Tendulkar – on Sunday.

Meanwhile, Tendulkar also accepted Ellyse Perry’s invitation to bat for an over, bowled by her, at the Junction Oval in Melbourne during the innings break of the charity match, which will follow Australia women’s T20I tri-series game against England.  “I would love to go out there and bat an over (much against the advice of my doctor due to my shoulder injury),” he tweeted in response to a request from Perry on social media to help raise more funds.

Not our day today, but we’re gearing up for a huge day tomorrow with the Bushfire Cricket Bash straight after our must-win match against England!@sachin_rt, keen for a hit in the middle to rustle up a few more $ for bushfire affected communities? 👉 https://t.co/aKGDE5AH4f pic.twitter.com/RtAxyot7ow

“Hope we can generate enough money for this cause, and to get me out there in the middle.”

In recent weeks, there have been several initiatives from cricketers and clubs to chip in with relief at a time of crisis. Shane Warne’s auction of his baggy green has been one of the highlights of this, raising over a million dollars (AUD).