Kohli-cam: Scott Oliver is in awe of the brain, swagger and warrior spirit of ‘Boss Man’ Virat Kohli.

Distraught at being unable to carry his India team over the line and gracious with his comments in defeat – tellingly, he singled out England’s “relentlessness”, a quality he personifies more than any other current cricketer – Virat Kohli emerged from the Edgbaston Test having again underlined his credentials as cricket’s Ultimate Warrior and the embodiment of what he wants his India team to become.

Every thought and act, every breath and step, is designed to exude strength

The academic sociologists tell us that in times of great social strife and political turmoil, the masses hanker after strongmen. Just as the 1930s-echoing, post-Crash convulsions of our epoch have ushered in Trumpism and his fellow travellers, so the chaos that befell India’s first innings after Curran’s three-wicket burst and Stokes’ mid-afternoon surge had left them reeling at 100-5 demanded that the Leader restored order, quelled anxiety, and gave his people the feeling of strength once more.

To watch Kohli go about his business at Edgbaston was to observe a cricketer whose every thought and act, every breath and step, is designed to exude strength, to psychologically subjugate the opposition, and thus to inspire his own men. Not a single opportunity is missed for a barb, an incursion into enemy space, a gesture of domination, a provocation.

In this, special attention, it seems, has been paid to the England skipper, a world-class batsman, undoubtedly, but one still feeling his way as a Test match captain, still with his apparatus of authority to build. Unlike Kohli. 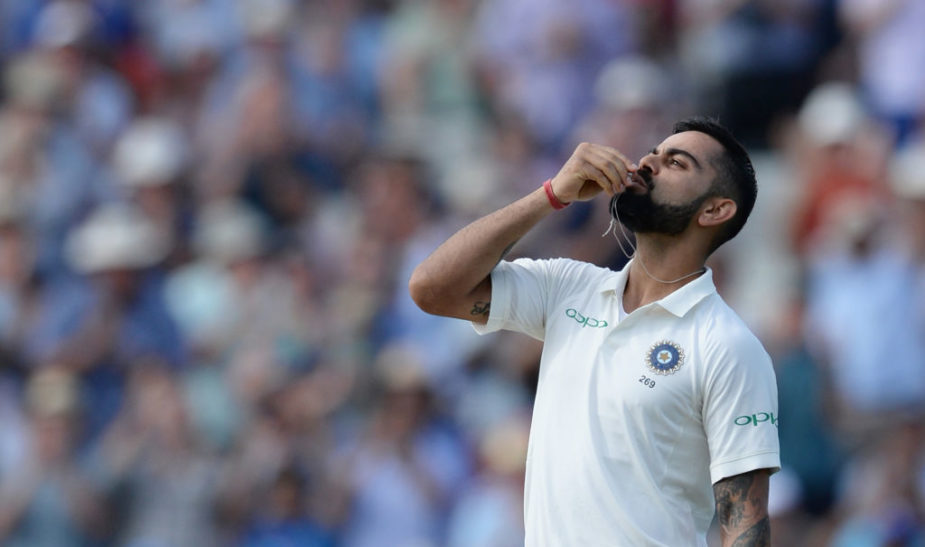 Yes, there may still be a few tactical head-scratchers – when isn’t there, with any captain – but there is absolutely no doubt who’s in charge on the field (and of course, this is central to the art of leading, to bluff decisiveness even when you’re not sure: if you don’t know, don’t show, yo).

Evidently, Kohli leads from the front in terms of performance, but the aura of authority is also derived from that sharp brain and sharp tongue – that swagger, a charisma built of mountains of runs, the clarity and precision of expression, and an on-field manner that screams: I am the boss, I got this.

Of course, it’s something of a Test-cricket trope to target the opposing captain – the great modern West Indies and Australian teams did this overtly, eyeing up ‘the head of the snake’ – and judging by the opening skirmishes of this series it’s feasible that Kohli has taken upon himself to try and cow Root at every given opportunity. Not by making it personal, so much as individual. A duel. Me and you, let’s go.

Consider Kohli’s demented cackling mockery of Root’s mic-drop celebration from the Headingley ODI after he had run out his opposite number on day one with a direct hit from deepish mid-wicket – the sheer frothing aggression of it, an overflow of an irritation marinated for several days (lip readers out there probably got the gist of Kohli’s bespoke send-off).

With plenty of cricketers, the fact that a cheeky celebration clearly directed at his white-ball doubters in the media rather than the opposition could be the source of such palpable annoyance might be considered a chink in the mental armoury, an opening to exploit, a hinge that could be unhinged.

Yes, Kohli bristles; sure, he’s irkable. This is the terrain he occupies, but if you’re going to engage him there then you better be able to go toe-to-toe as cricketers, because if you’re talking the talk without walking the walk … well, good luck with that, amigo. 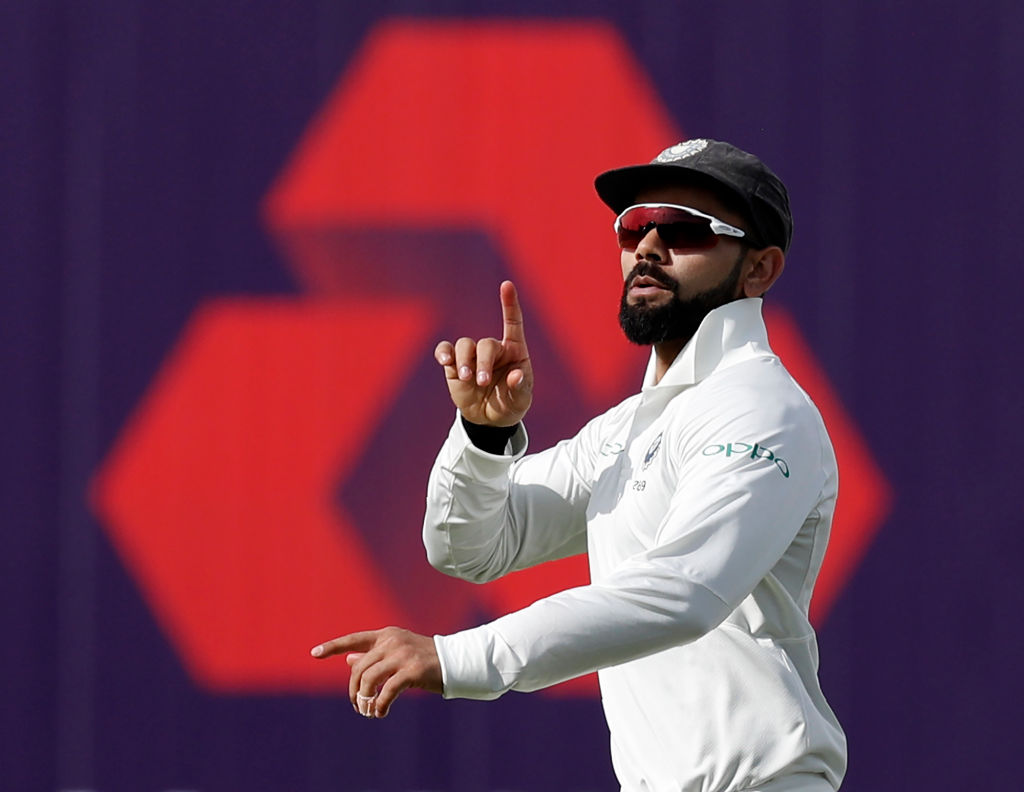 Hyper-aggressive Kohli may well be, but he’s not wild. Battles are carefully chosen. When Anderson walked out at the end of England’s raggedy second innings, India still theoretically in front of the game despite Curran’s counter-attacking salvo, he made his way through – not around – India’s slip cordon, crossing their territory, right alongside Virat.

With bat in hand, Jimmy is a soft target, yet here Kohli half-turned away, averting eye contact, eschewing the opportunity for an easy pop. Why? The battles ahead, and the deep respect for Anderson’s ability – certainly in his own backyard – to make him look ordinary. ‘Not a battle I need to fight. Not yet. Not here’.

But there was more than a word for Malan (assuming Kohli wasn’t chatting to Dinesh Karthik, that is), who came in all left-handed-y after Keaton Jennings had followed Cook in being gobbled up by Ashwin. Kohli was fielding at short extra-cover, 15 or so yards from the bat, ostensibly on the drive but instead of being catching-position static, he bustled in with a hyperactive three-pace sprint, so that each delivery he finished up ten yards from the bat.

It was not quite whispering distance away, but a position from which he could engage in what the marketing gurus call a “highly targeted” assessment of the batsman’s situation: his technique, the cliff-edge of his career (what with the costly dropped catches, too), perhaps underlining for Malan the run-scoring possibilities that a 7-2 offside field offered, even to a man in the last-chance saloon, should he wish to sweep Ashwin off the stumps, providing a voice-over narration of the specific pressures of it all for the benefit of both opponent and his team, thus shaping the event, defining the moment, directing the proceedings.

There is driven; there is mania; and then there is Kohli

A few overs earlier, when Root, new to the crease, had readied himself to face Mohammed Shami early on day three, Kohli crept in a few steps from third slip, then a little further, just to ensure the audibility of the vitally important observation he had to convey to his opposite number (unfortunately, the players aren’t mic’ed up, but I imagine it went something like: “I did it yesterday, Joe, what you got today?” or some pithier version of “all the pressure on the captain’s shoulders, boys”).

When Root – weight not quite transferred through the ball, blade twisting slightly in his hand – mistimed a couple of cover drives, to his own evident dissatisfaction, Kohli was there on the scene, squawking away. Root strolled away, adjusting his gloves. Kohli took a couple of steps closer, perhaps helpfully offering a few technical pointers, certainly hankering after a direct confrontation. Me and you, Skip, let’s see what you got.

Of course, Kohli doesn’t need a second invitation to get his strut on (there’s not a lot that’s contrived about it, after all), but even he will have had an extra spring in his already very springy step after a myth-slaying 149 that finally pulverised the very last, desperately feeble pseudo-argument that a previous lack of Test runs in England meant he still had a few final steps to take in order to prove his indisputable greatness (cricket’s version of the Lionel Messi Wet-Wednesday-in-Stoke theory). He didn’t, and he doesn’t.

True, he survived the stiffest of examinations from Anderson thanks only to a little good fortune, but to claim that being dropped negates the awesome quality of the last hundred or so runs he scored is arrant nonsense. By the end, Kohli was running things to such an extent that he faced all bar 18 deliveries in a 16-over spell of (big) cat and (squeaking) mouse. The Boss, bossing it. And letting England, and Root, know it, too.

Early on in one weary Ben Stokes over from the City End late on day two, England deploying all in the deep save a couple of slips, Kohli drove hard out to the left of Root, four-fifths of the way to the fence at long off. He was trying to steer it further to extra cover, an area into which he had already crunched a couple of imperious boundaries.

Realising it wasn’t going for four and thus mildly annoyed at having fallen slightly short of the desired laser-guided perfection, Kohli followed the shot a couple of steps down the pitch and then, rather than returning to the sanctuary of his crease with the ball not dead, he took another lordly step or two down the pitch to do a spot of gardening, occupying territory that wasn’t his, a strongman going into the Crimea and daring the UN to stop him. 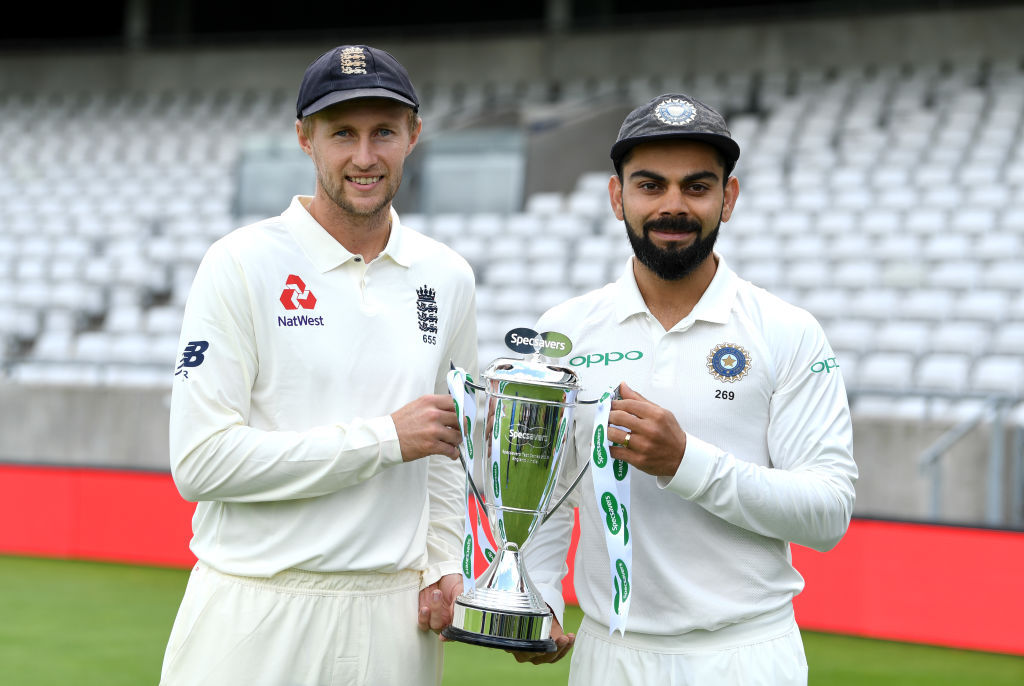 Root swooped and shaped to throw – as though demanding that the norms of international law were observed – but Bairstow was not on the same wavelength (not for the first time this match), stood chatting away to Alastair Cook at slip. Seeing Root’s intention, Kohli half-turned, as if to go back to his crease, but then stopped, pointedly and provocatively, before fixing Root with a long-distance stare: ‘Go on then, throw it. If I fancy prodding the pitch, then that is what I’m going to do…’ The Boss, bossing it.

Related Story: ‘Kohli’s the boss’ – coach Ravi Shastri cedes to captain’s authority in team India
If Kohli is fluent in body language, then the dialect is this stripped-back relentlessness. Famously, when he discovered that Novak Djokovic had 1.5 percent less body fat, he set about going under that number. He is dragging his team culture into the same muscular and focused future (you better not be slacking on Virat’s watch).

There is driven; there is mania; and then there is Kohli and his insane dedication to be fitter, faster, better, stronger. Always ‘on’. Crackling, alert, predatory, cunning. The mind whirring, the body talking. An endlessly fascinating war-machine. One worthy, perhaps, of Zidane-like documentary treatment. Kohli-cam.

This is Virat Kohli, indomitable at all times. Watch him, kids. Watch him closely. No-one is going to come knocking. He is the one who knocks.