Ben Jones analyses how the two sides used the new ball on day two of the second Ashes Test at Lord’s.

It’s not a very Australian thing to do, inserting the opposition. The last time they did so, back in February 2016, was the last Test James Pattinson played before his injury woes returned and kept him away from this level for three years. Plenty has happened in Australian cricket since that day.

Typically, such a move is seen as the aggressive one. Get on the front foot, slice through the top order, bundle them out. Yet today it didn’t feel like that – this was rather different. The pitch at Lord’s was never going to be the sort of surface where the ball darted around and bowlers ran in expecting wickets every ball; according to PitchViz calculations, this is the slowest Lord’s surface on record.

Yet Australia had a plan. They were going to lay a tightrope, and force England to walk across.

Before Josh Hazlewood last came to England, he was hyped beyond belief. Here was an Australian quick not in the Mitchell Johnson mould, or even the Brett Lee mould – this was a man cut from the same cloth as Glenn McGrath. He was going to come to England and rip the Poms apart on green seamers, finding that nagging length with which McGrath had taunted England for over a decade.

In practice, Hazlewood struggled slightly, because he couldn’t find the right length. Perhaps enticed by the promise of nip and swing, perhaps emboldened by his rising reputation, he tried a bit too hard and pushed the ball that bit too full to be consistently effective. 43% of his deliveries were full, too many not on that 6m-8m length, inbetween front foot and back foot, getting the batsman hopping. He has never bowled that full in any other Test series. 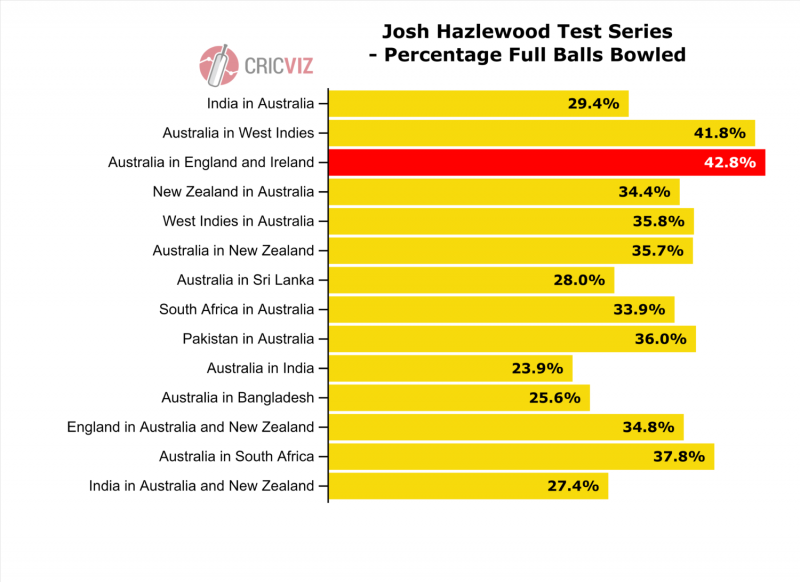 Today, he showed that he understood what his issue was and that he’d learned his lesson. He wasn’t going to be caught out again because his opening spell was extraordinary for how often he found that good zone. Seventy-two per cent of his deliveries were on a good line and length, the most he’s ever recorded in an opening spell, the most almost anyone has recorded ever. It’s the fifth-highest figure for an opening spell (minimum 36 deliveries) in the entire CricViz database, going back to 2006. Any Test, anywhere. McGrath, on this ground in 2005, managed 53 per cent. Hazlewood smashed that.

In support, Cummins was playing the same tune. If anything, he’s a man who tends to err on the short side, slamming the ball into the pitch just back of a length. Sixty-three per cent of his deliveries in that opening spell were on a good length, the highest figure he’s ever recorded in an opening spell. Hazlewood’s good work was not going to be undone at the other end.

Australia’s commanding display at Lord’s on day two had Justin Langer’s influence stamped all over it, writes @Phil_Wisden.https://t.co/hp5AaeTJ7N

England – your move. With that degree of pressure put on them, England’s batsmen weren’t able to cope. Jason Roy didn’t need that much persuading to leave the crease, but Australia weren’t giving the others much option either.

Dismissed for 258, England’s bowlers were forced to strap on their boots and get to work for an hour this evening. Yet the contrast to Australia’s opening spells was stark. There’s a kind of manic fury to being given an hour with the new ball. The mini-session is a discrete thing, bowling spells unlikely to impact too much on tiredness later in the innings, getting in of little value. It seems to produce different cricket.

Stuart Broad pitched 37 per cent of his deliveries full, more than any other bowler in the Test; whilst his line was loose, he was determined to give the ball every chance to swing, despite fears that this batch are not quite as amenable to doing so as the 2018 variety. Removing Warner was his reward. At the other end, Jofra Archer was steaming in and finding considerable seam movement, 0.9° comfortably more than anyone else – but with only 39 per cent of his deliveries in the channel outside off (the lowest percentage of any seamer today), it’s effectiveness was limited.

Australia’s seamers hit a good length 61 per cent of the time in the first 15 overs. England managed 45 per cent. Jofra Archer and Stuart Broad were bowling more full balls than Australia had, more short balls too, trying to make something happen because their window to perform was so much smaller. They were bowling like they were trying to make up for five hours of bad, with one hour of good. 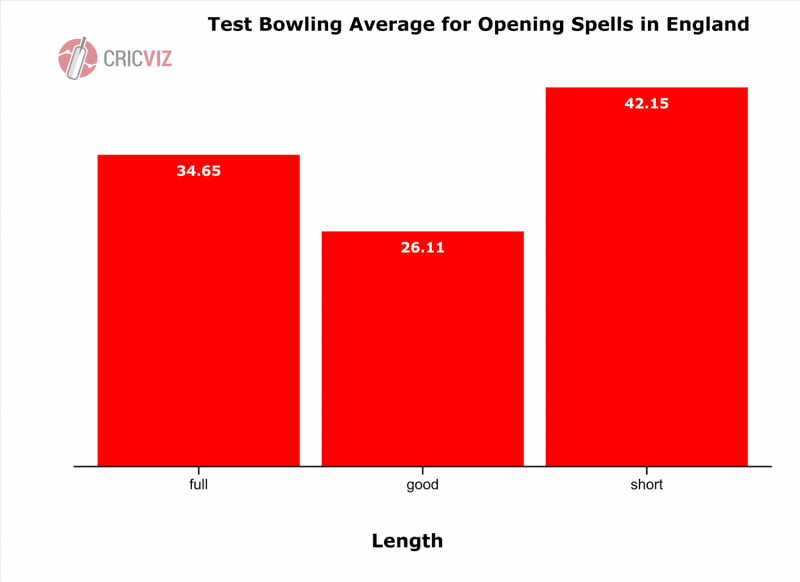 Of course, Australia’s approach this morning is a consequence of the series situation. They are 1-0 up, after all. They have the England batting line up worrying, pushing people up and down the order looking for the right combination, everyone questioning their place in the team. Sitting back, allowing the opposition to make their own mistakes, and just keeping enough pressure on to ensure those mistakes are punished, makes sense. England, backed into a corner in both the series and the match, did not have the luxury of potentially being too passive. However, it may have cost them. That opening session only brought two wickets, but it set the tempo for the play, and showed Australia that as long as they did the basics right, England would subside. Hazlewood’s brilliance is hard to match, but England weren’t even close to it.