The Kia Super League (KSL) 2019 begins on Tuesday with a triple-header. Here’s a primer ahead of the tournament.

The KSL is back, as Lancashire Thunder take on Southern Vipers in Liverpool, Loughborough Lightning host Western Storm and Yorkshire Diamonds take on defending champions Surrey Stars in Leeds on August 6. The six teams have one aim: to make it to Finals Day on September 1, and be the ones lifting the trophy at Hove.

Here we dissect the main talking points ahead of the fourth and final KSL tournament.

Give your Western Storm shirt one final run, get the Lightning colours on your face one last time. This will be the end of the KSL as you know it. (But if you believe the ECB, we all feel fine about that.)

So what next? At the launch of The Hundred, the ECB indicated that a women’s event featuring eight teams with the same names and brands as the eight men’s teams would run parallel in the 100-ball tournament. But of course, that still is no replacement for a T20 tournament.

Details aren’t fully clear, and there have been conflicting reports, but this much we know based on what Clare Connor, ECB’s head of women’s cricket, revealed recently: a board meeting in July approved a two-year plan to invest £20million into cricket for women and girls. There will be a major restructuring of the women’s cricket structure and new “eight-team semi-professional” 50-over and T20 competitions are set to be introduced from next year.

The KSL, in its fourth season, was started with the objective to help players bridge the gap between the standard of cricket at domestic and international level. It has done so, while also reaching fans in smaller cricket centres.

The restructure can’t happen soon enough, though, because English women’s cricket, especially the players themselves, have a point to prove after a chastening Ashes. 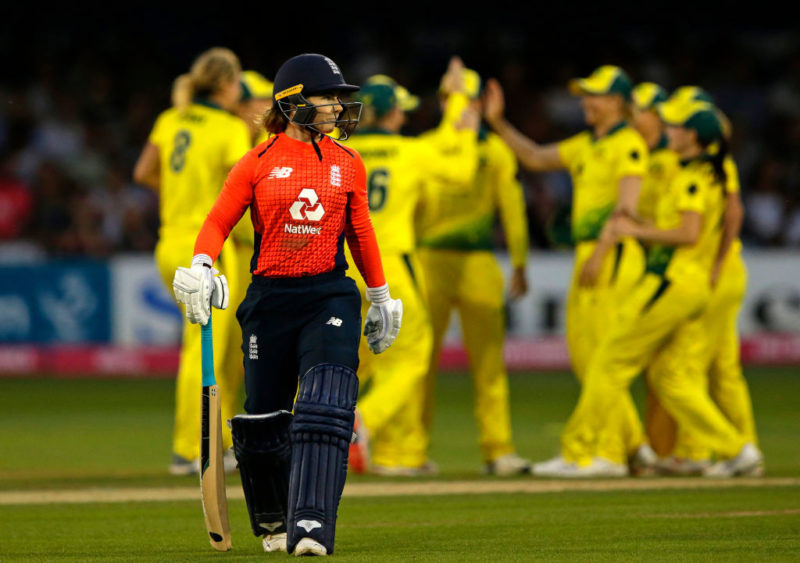 There were few joys for England during the recent Ashes series

A 12-4 scoreline in favour of the visiting Australians was a sobering reminder of just how yawning the gulf between women’s cricket’s No.1 and No.2 sides has become. “There are 14 stars within that squad,” former international Lisa Sthalekar told Wisden recently. Tammy Beaumont seemed to agree in a frank assessment: “Australia are producing 20-year-old superstars.”

Only four England players were among the top 10 run-scorers in the Ashes – two of those were Katherine Brunt and Laura Marsh, who are primarily in the team for their bowling. England’s internationals need a confidence boost and this is the perfect platform to get started.

Last season the KSL threw up the likes of Kirstie Gordon, Sophia Dunkley and Linsey Smith, who broke into the squad for the Women’s World T20 2018. Gordon, in fact, took 3-16 on debut and was one of the finds of the tournament.

The next T20 World Cup is six months away. Who will stake a claim for a plane ticket this time around?

Mady Villiers, the 20-year-old off-spinning all-rounder turning out for defending champions Surrey Stars, is one to watch. She starred in England’s only win of the Ashes, taking 2-20, including the wicket of Alyssa Healy. Her Surrey teammate Bryony Smith is also waiting for an England return.

Where are the Australians?

Healy will be the only member of the Ashes side participating in the KSL this time, making her tournament debut with Yorkshire Diamonds. Sophie Molineux was the other current international in the mix, before injury forced her to withdraw. Amanda Jade-Wellington has taken Molineux’s place, while Tahlia McGrath too has a contract with Lancashire Thunder.

💥Check out what the squad got up to today with @channelventure in Taunton – huge thanks to all the guys for all the fun and helping out with our preparations ahead of the start of this years KSL campaign! #StormisComing 🌪 pic.twitter.com/0AsyIlayAS

The availability of West Indian players for the second half of the tournament is in doubt, so teams have planned for cover for Stafanie Taylor (Southern Vipers) and Hayley Matthews (Loughborough Lightning).

While the South African contingent remains as strong as ever (six at last count, with the injured Chloe Tryon missing out), India’s representation has doubled. Top-order batter Jemimah Rodrigues makes her maiden appearance, while all-rounder Deepti Sharma’s off-spin should be handy for Western Storm.

Alex Blackwell, the former Australia captain, has stepped back from her role as coach of Lancashire Thunder, but another recently retired stalwart is stepping into coaching. Danielle Hazell, part of England’s 2017 World Cup-winning squad, hung up her playing shoes at the start of the year but has since stepped into the role of coach of Yorkshire Diamonds, her old team.