Having finished as runners up last time round in the World T20 in West Indies, England will hope to go one better in Australia when the Women’s T20 World Cup begins later this month.

Currently ranked second in the world, England will start their campaign against South Africa  in Perth as head coach Lisa Keightley leads the team for the first time at a global event.

Here are five England players from their squad who will be worth keeping a particularly close eye on as the tournament progresses:

Since making her T20I international debut against Pakistan in December, Glenn has taken nine wickets from six games at an excellent average of 14. At just 20 years old, the leg-spinner is one of England’s most exciting prospects and is in very good from heading into the tournament – she was England’s joint leading wicket-taker in the recent tri-series against India and Australia. For so long England have spoken about their desire to field a top class wrist-spinner and now, going into a T20 World Cup in Australia, they seem to have found one. 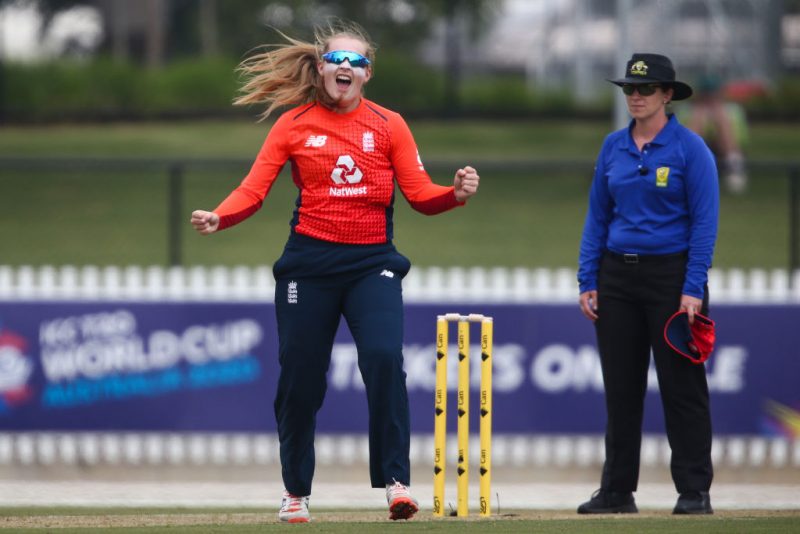 Sophie Ecclestone, despite being just 20, is one of England’s key players in their Women’s T20 World Cup squad

Despite not featuring in that recent tri-series, Villiers is another young English prospect who will hope to establish herself at the T20 World Cup. She was impressive on international debut during last year’s Ashes series, with her emergence being one of the few positives to come out of an otherwise fairly bleak series for England. She could play a crucial role should England look to rebalance their side at any point in the tournament.

With four years of international cricket experience under her belt at just 20 years old, Ecclestone will be one of England’s key players in Australia. Firmly established as one of the premier spinners in the women’s game, Ecclestone is already regarded as a senior figure in the England bowling attack despite her age.

Ecclestone was key in England’s victory over Australia in the tri-series, finishing with 1-26 from her four overs before conceding just eight runs during an excellently bowled Super Over.

One of England’s star performers in each of their last two major white-ball tournaments, Sciver will be crucial to success this time around, too. Experienced and vital to the balance of the side, Sciver had a great tri-series with bat and ball, scoring a quick 50 against India in Melbourne and picking up 3-23 in England’s Super Over win over Australia.

England’s wicketkeeper-batter had a lean tri-series but she excelled behind the stumps, picking up three stumpings as her quick glovework aided England’s cohort of spinners.

Though she struggled for runs in Australia, Jones was at her best against Pakistan in Malaysia, scoring 53, 89 and 37 as England won the series 3-0. Having recently moved up to the top of the order in T20I cricket and now England’s established first choice wicketkeeper after the retirement of Sarah Taylor, Jones has two big roles to play for this England team.