As soon as it happened, the drop by Joe Denly of Kane Williamson off Jofra Archer on the final day at Hamilton became iconic.

The Black Caps captain was fooled by an Archer slower ball, spooning up a dolly to Denly at mid-on, only for England’s No.3 to spill the seemingly undroppable chance.

If the initial reaction from all involved and watching was disbelief, then the following thought was to discuss it, how it possibly could have transpired, and whether it might even be the worst spill of all time.

Two who didn’t delve into exploration, however, were the bowler and fielder themselves. “There was no need for either of us to say anything: we both understood that these things happen in cricket,” Archer wrote for the Daily Mail. “Was it the most memorable drop I can remember off my bowling? Yeah, it probably was. It’s still making me chuckle.”

While Archer had reason to feel aggrieved, he also contributed to some of the mirth himself, celebrating before Denly had completed the catch, even as his teammate Stuart Broad looked shocked in the background. “I saw the funny side of it straightaway,” wrote Archer. “And it looked even funnier after I saw the footage of Broady looking a bit surprised in the background as I wheeled away celebrating what I thought was the wicket of Kane Williamson.”

The drop detracted from a splendid piece of bowling, with Archer having deceived the batsman placed No.3 in the ICC’s Test Batting Rankings all ends up with a well-disguised knuckle ball. He even put a twist on the variation, not engaging his front arm in his bowling action to further befuddle Williamson.

“Joe Root has been challenging us all to find different ways of taking wickets in these conditions, and that ball to Williamson was an example of that,” he wrote. “It was a knuckle ball, which I deliver with the ball resting on my middle and index fingers. But I also decided not to use my left arm at the point of delivery.

“I first saw Jerome Taylor, the former West Indies opening bowler, do it, and I’ve bowled it once or twice in games before. But I’d not been practising it here. The idea just came to me in the middle – it’s not actually that hard to do. And it certainly produced a false shot from Williamson.” 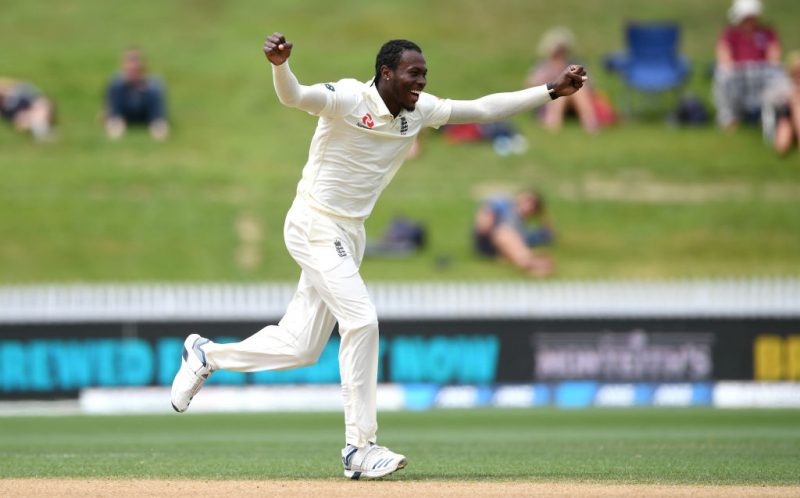 It was an unusual end to a series of struggle for Archer, perhaps the first time he hasn’t found instant success since making his England debut against Ireland in May. Had that catch stuck, or another earlier that morning by stand-in keeper Ollie Pope, things might have turned out differently for Archer and England.

“I realise I finished the series with only two wickets, which was disappointing after the summer I had,” Archer wrote. “But you never know how differently things might have turned out if a couple of chances had been held. I’d never blame a team-mate for dropping a chance: we’ve all done it, and I’ll have plenty more catches put down off my bowling over the rest of my career.

“But if two drops turn into two catches, I’d probably have had a bit more momentum, and who knows how many wickets I’d have ended up with.”