After India cantered to a 3-0 victory over West Indies in the Twenty20 International series, Virat Kohli, the captain, was all praise for the newbies in the limited-overs side, in particular Rishabh Pant and Deepak Chahar.

After two poor outings in Lauderhill, when he scored 0 and 4, Pant played a match-winning 42-ball 65* to help India to a seven-wicket victory in Providence. There was plenty of focus on Pant this series, given he is the only wicket-keeper in the squad after MS Dhoni made himself unavailable for selection, and his performance has drawn praise from Kohli.

“We are looking at Rishabh Pant as the future,” Kohli said. “He’s got a lot of skill and talent. It’s about winning and finishing games like these and gaining confidence, which he wants to do as well. It’s about giving him a bit more space to ease himself into international cricket and not putting too much pressure because of the way he’s played in the IPL.”

The 65* in Providence was Pant’s second T20I half-century, and a lot of it came while batting with his captain: they put on 106 for the third wicket.

“At the international level, you need to tackle pressure differently and play yourself into the whole set-up,” said Kohli. “He has come a long way since he started. If he plays like this more regularly, we will see his potential shine for India.”

Kohli was just as laudatory of Chahar, even going so far as to compare him to swing ace Bhuvneshwar Kumar. Chahar returned an incredible 3-4 in three overs, which comprised a maiden, and dismissed the West Indies top three of Evin Lewis (10), Sunil Narine (2) and Shimron Hetmyer (1). 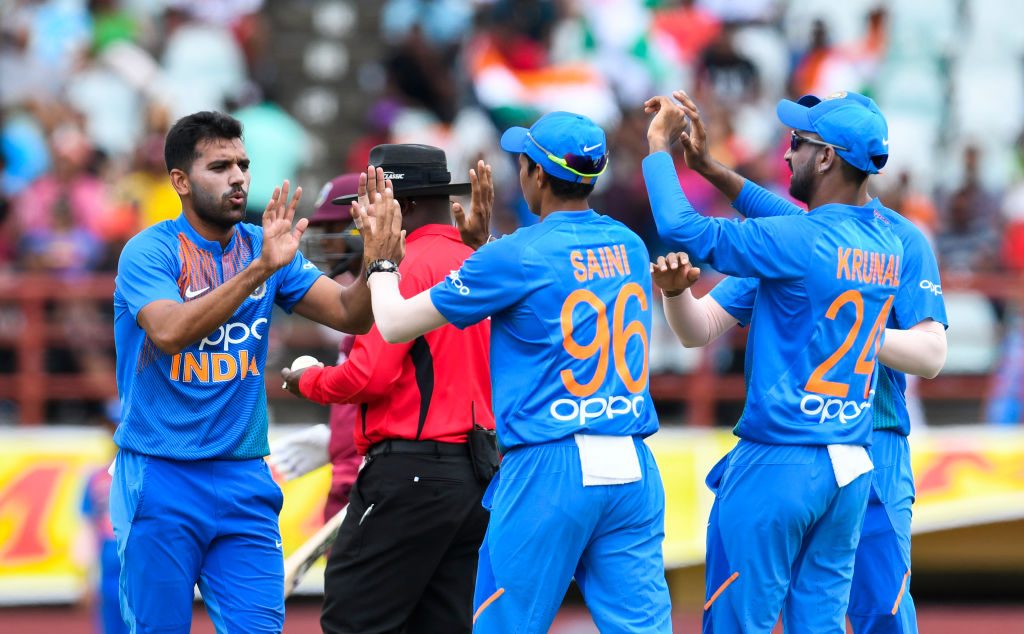 Chahar, 27, has impressed under Dhoni during his time with the Indian Premier League side Chennai Super Kings, and Kohli is now harnessing those capabilities as well.

“Deepak is very similar to Bhuvi, he’s lethal with the new ball,” Kohli said. “Bhuvi has bit more experience at the death. Getting a lot with the new ball in any condition has been his USP in the IPL too.”

The ODI leg of India’s tour will begin in Providence on Thursday, August 8, before the teams travel to Port of Spain for the final two matches of the three-match series.