Tom Curran, the England all-rounder, feels that his solid returns in the Big Bash League could strengthen his claim for a spot in England’s 15-man World Cup 2019 squad.

The 23-year-old, who recently signed a three-year extension with Sydney Sixers, picked 20 wickets in 14 innings in the 2018-19 edition of the BBL. He said putting in those strong performances “gives me confidence” to replicate them on the international stage.

“It helps to play in those big franchise tournaments,” Curran said on Saturday, February 16. “It’s the biggest stage apart from international cricket, so to go there and do well gives me confidence.” 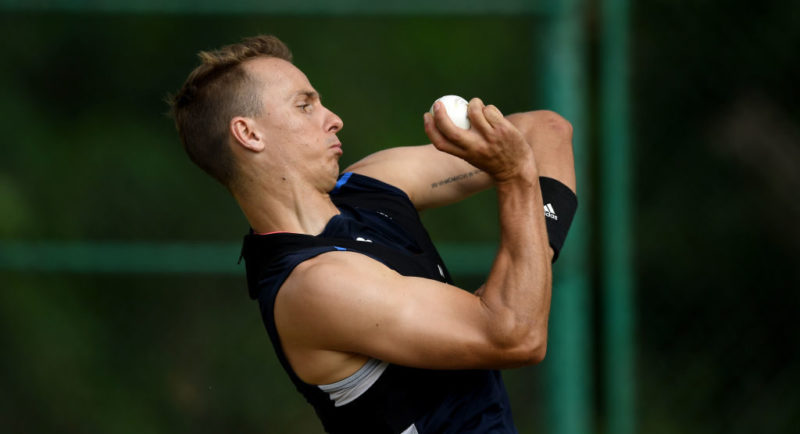 Curran is now in the Caribbean to take on West Indies in five ODIs, the first of which will be hosted in Barbados on February 20. He hopes to continue impressing with the ball, especially in the death overs, and cement his place in the premier event, starting May 30.

“Hopefully, I can put in some good performances here and get in that World Cup squad. I enjoy bowling at the death and, if I can keep improving on that, it’s a big string to my bow. It was my death bowling that gave me the opportunity to make my T20 debut for England.

“You want to perform at the hardest moments; the crunch moments in the game. The yorker is the hardest ball to hit and one of the hardest to bowl. I’ve been trying to work on that constantly, keep nailing it, and always trying to improve. It’s going pretty well.”

"From nipples down, you’ve got to be strong – legs, trunk, glutes – it’s not about looking good in a T-shirt!"

Curran could be in direct competition for a World Cup spot with Jofra Archer, who will become eligible to represent England in March. However, he does not want to get “too caught up” in thinking about selection, and wants to do his talking on the field.

“I try not to think about selection,” he said. “In the back of your mind, you want to get into the squads and you want to be playing but I don’t get too caught up in it. It’s out of my control so I’ll be focusing on what I can do.”

On Archer, Curran added, “I’m sure he would be welcomed. It’s a great bunch of boys. I can’t see why he wouldn’t be welcomed. He’s a good player, but it’s not my job to select the side. T20 skills are transferable. They are pretty similar.”