Blunham is a small civil parish in the district of Bedfordshire, with a population of less than a thousand. It is home to Blunham Cricket Club, a thriving rural community that holds the distinct record of breaking a world record three times. It took a village for the club to ensure its latest entry into the record books, finds Sonali Dhulap.

In June 2003, a French cricket club called Club des Ormes played 26 hours 15 minutes of continuous cricket to set a Guinness World Record for the longest cricket marathon. The little club was raising money for La Ligue Contre le Cancer, the first NGO in France to fund cancer research, and for one of the club players, who was affected by the disease. The idea, and the chance to raise money for a good cause, inspired several small cricketing clubs to take up the challenge.

In the last 16 years, the record has been broken 13 times, thrice by Blunham CC themselves. They first surpassed it 11 years ago in 2008, spending 59 hours, 39 minutes and 56 seconds in the field, raising money to improve facilities at the club. They were able to hold that record for only four months, though, before an Australian club broke it in January 2009. Blunham then rallied two years later, adding about 45 hours to their previous attempt to set the record for a second time.

Less than two weeks ago, they launched a third attempt: a monumental effort to play non-stop cricket for 168 hours, nearly 18 more than Loughborough University, who had extended Blunham’s second attempt to 150 hours and 14 minutes in 2012.

World record ready! The lights are working which always helps. @Blunham_CC look to reclaim the world record for the longest continuous game of cricket. 168 hours, all weather, all conditions! 🏏🙌 #blunhamarmy @Blunham19 https://t.co/6t4xouPBfF pic.twitter.com/4Io6PJT84Y

An event of this magnitude comes with a lot of planning. The club unveiled its official poster in March this year, detailing the seven-day affair beginning from August 24, 2019. The event included live music, cinema screenings and several fun activities for adults and children. At the start of the year, the club began posting profiles of the 24 players, aged between of 17 and 54, who were going to take part in the attempt, on special Facebook and Twitter accounts that were separately set up for the event.

“It was a team of people who did the main organising, headed up by George Hutson. It had been on the agenda for a while. Planning started around one year ago, I would say,” Connor Heaps, captain of the Blunham first XI, told Wisden.

Both Hutson and Heaps were a part of the squads featuring in the match. In fact, Heaps is one of five players who participated in all three record attempts: the other four are David Garofalo, Daniel Coverdale, Neil Wildon and Chris Boulding. 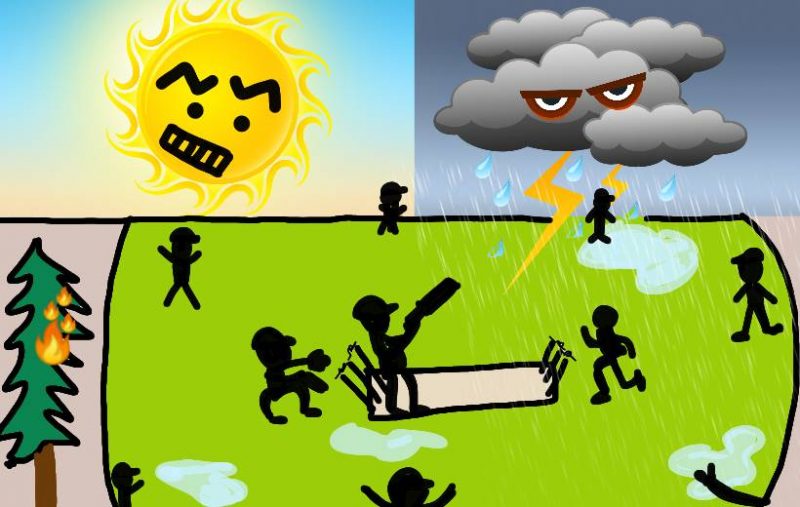 This time, BCC had a two-fold agenda: they were raising funds to, firstly, secure a field at the bottom of their current ground, where they plan to put up a second pitch and, secondly, for two charities. Sue Ryder, a UK-based organisation supports people with complex needs or those undergoing a difficult time, be it a terminal illness or the loss of a loved one, while Mind, also UK-based, offers advice and support to people with mental health problems.

The attempt was not without challenges, after it started on a Sunday. Think of every little thing that can go wrong and the Blunham lads had to contend with it. “Heatwave temperatures of 32°C, a hurricane-like hail storm, at one point the ground was under 2 inches of water and there was also a localised tree fire from embers of a pizza oven that was present,” listed out Heaps.

For the first couple of days, Blunham was recorded as one of the hottest places in the UK, with temperatures touching 32°C. If that was not enough, Tuesday brought in copious amount of rainfall, which caused several parts of the ground to get flooded. There was so much surface water that the club’s ground staff had to clear it while the game was going on. Massive gusts of wind also troubled the players and the crowds. At one point, the wind even blew away the inflatable chairs that spectators had brought with them.

There was even a mini fire when the wind blew the flames from a pizza oven, set up by a local catering company, and caused conifers by the car park to catch fire. Thankfully, firefighters rushed at the spot in time.

The rules for consideration of the record are simple, albeit unforgiving: the game is played as 12-a-side, the final timing doesn’t include breaks. So, a lot of thought went into setting up rules and schedules for the players.

“Every innings was scored, however we did lose a few innings in the rain unfortunately for us. Players were rotated on a rota basis where we were able to have two or three fielding breaks, which were three hours each. Other than that you slept when you weren’t batting,” explained Heaps. “No-one has set roles as such, but mine seemed to be based around batting the ‘nightshifts’ between the hours of 1am and 7am.”

Firefighters from #Bedford attended a tree fire on the grounds of Blunham Cricket Club this evening. After the fire was extinguished, the crew took a minute to support the @blunham19 incredible effort to create a new world record for playing 168 hours of continuous cricket!😮🏏 pic.twitter.com/xJIHOD7KfA

Operating on very little sleep wasn’t easy. According to Heaps, they felt like giving up on several occasions, but became their own cheerleaders, pushing one another to carry on.

“[So many times] we felt that the game was on the edge of being abandoned but we had no choice but to continue. I saw a few of our players simply in tears on the boundary at various points,” he said. “We really rallied around each other, telling jokes, providing sweets for the team and putting an arm around each other when times got hard.”

More fantastic was the support they got from the local community, with more than a hundred volunteers present to offer help. Spectators turned up to ensure that the players felt acknowledged, and when the players broke the Loughborough University record on Friday, a huge cheer broke out.

“The community was incredible. From washing players’ clothes, to providing meals for everyone, cleaning up, walking out drinks, holding down the tent when the storm hit. They were the real heroes of the whole event.”

Heaps suggested that the club raised between £50,000 and £55,000 – an amount that will go a long way in supporting the community.

Their three attempts in 11 years, each more grandiose than the previous, prove that BCC hate anyone else holding the world record. If this one gets broken, will we see a fourth attempt – more majestic than the last? Who knows. For now, the only thing this tough little cricket club knows is that this is not the end.

“Just over 20 years ago, Blunham only had the one Saturday team, but since the reintroduction of our youth set-up, we’ve now expanded the club to four Saturday teams, two Sunday teams and seven youth teams (including a girls team),” Heaps said. “We are very proud of how far we’ve come and we don’t plan on stopping here!”