In issue 21 of The Nightwatchman, John Crace reflects on those tours he always wished he was on.

I’ve let my team down. I’ve let my country down. But most of all, I’ve let myself down. Previous England tours to Australia have been marked by a complete change of lifestyle. Late nights in front of the television to capture the morning’s play Down Under. A vigil that was sometimes extended past the lunch break if the game was particularly exciting or if an England player was nearing a milestone. Then to bed with the alarm set to catch the last hour or so before the close. It was a gruelling regime at times, but one I seldom deviated from. Or regretted. I would go in to work tired but happy. Knowing that I had done my bit.

This last winter has been completely different. I started with the best of intentions. For the first day of the first Test in Brisbane, I was sat in front of my TV – armed with Diet Cokes and snacks – in time for the toss. But as the match got under way, I found myself curiously detached. I managed a flicker of disappointment when Alastair Cook nicked off to slip early on, but I was more disturbed by the incessant chunter of the commentators on BT Sport. They never stopped talking. Even when they had nothing to say. By the first drinks break I had had enough and went to bed.

That turned out to be the highpoint of my Ashes viewing. Thereafter the most I managed to watch live were the last few overs of the day when I got up in the morning. It wasn’t just that it was all somehow too predictable – I heroically devoted hour upon hour when I would have been better off asleep to England’s 5-0 whitewash a few years back – it was also just too unengaging.

It was just that rather than follow the England v Australia contests in real time, I chose to relive series from a bygone age

There weren’t enough players in the team in whom I had any real emotional investment. At heart, I suppose, my cricket-watching has never matured much beyond my teenage years when my pulse would quicken whenever Alan Knott or John Snow were centre stage. Over the years, the cast list of cricket idols has changed but the passions haven’t. Until this year. With the omission of Ben Stokes due to his Bristol fracas, there was no one in the team I really cared about. I admired Cook, Joe Root, Jonny Bairstow and Jimmy Anderson but their disappointments never really felt personal.

So this winter’s Ashes series rather passed me by. I’d go to bed before play started and then check my phone first thing – usually to find that Steve Smith had made another century – to get the overnight score and then switch off for the rest of the day. Sometimes not even bothering to watch the highlights package in the evening. Yet my winter was not an entirely cricket-free zone. It was just that rather than follow the England v Australia contests in real time, I chose to relive series from a bygone age.

One of the great joys of cricket is the tour book. It’s a genre that has rather fallen out of favour with publishers in recent years: partly because there isn’t much demand for them and partly because most tours have become deadly dull. International teams jet in, play one warm-up game at most, play their Tests and one-day games, practise on their days off and then go home. Try getting a decent book out of that. At best you’re going to end up with an extended series of match reports. Most sensible people would rather read Wisden.

The cricket tour of even 30 years ago was a much more drawn-out affair and my bookshelves are full of such memories. Back then the tour book was a staple of the cricket publishing world, with few England series going unrecorded. These books are my place of comfort and retreat. Not so much for the cricket – though that is important – but for the sense of place, of culture and otherness. They are as much history and travel books: windows on a changing world. One that, as I get older, I am increasingly surprised to find that I have lived through.

So as my interest in this winter’s Ashes faded almost as soon as it had begun, I drifted back in time. Beginning with the winter of 1956 and Alan Ross’s Cape Summer. Not an obvious choice as the cricket itself didn’t appear to have been very remarkable, but one which appealed for a number of reasons. The first was that I had not read it for many, many years and second because I was curious to relive what it must have been like to follow a cricket tour during the Apartheid years. It’s been almost 30 years since the South African white nationalist government fell and it felt timely to remember just how much it has changed.

Ross was a keen observer. Not just of cricket but of the world around him. He had served with distinction in the navy during the war and was a well respected poet as well as being the Observer‘s cricket correspondent. His story begins on the voyage out to South Africa where he remarks on the large number of tankers he sees on the way. This was shortly after the Suez Crisis and shipping was forced to sale around the southern tip of Africa rather than use the canal. He also comments that his ship broke all records for bar consumption, so one must assume he had a reasonably good time on board.

It was a dispiriting sight and is unfortunately only the beginning

But once in South Africa, the book becomes almost as noticeable for what he doesn’t see as what he does. Black Africans scarcely get a mention throughout. It’s as if the government had deliberately concocted an itinerary where the English cricket team and its reporting entourage would have as little contact with black people as possible. To be white and segregated had become completely normalised, and the moments when Ross breaks out of this imposed bubble to comment on the political realities are all the more powerful for their scarcity. In Johannesburg he writes:

It has been a strange Christmas. The shops full of tinsel and Father Christmases wagging their white beards, and in the Drill Hall the first of the so-called ‘Treason’ trials. The police used batons on the crowds milling quite peacefully outside, and, with extraordinary foolishness, fired some shots that found innocent targets. It was a dispiriting sight and is unfortunately only the beginning. The Senate Act, the Suppression of Communism Act, the Industrial Conciliation Act, the Group Areas Act, the Bantu Education Act, removing between them the freedom of a man to work where he pleases, to think how he feels, to live with his family, to vote or own property or to defend himself or to develop to the extent of his full capabilities – where will it end? And how long will parliamentary democracy survive in South Africa?

These were both prescient and dangerous insights at a time when many of the British colonies in Africa had not yet achieved independence and when the South African regime was gearing up to become ever more repressive. Like all the best cricket books, Cape Summer is about so much more than cricket.

For a rather lighter read, I moved on to Frances Edmonds’ Another Bloody Tour. This is quite possibly my favourite cricket book, one that I return to regularly. Not just for its humour – Edmonds is a very gifted comic writer – but for its insight. Edmonds was – and still is – the wife of England left-arm spinner, Phil Edmonds, so she had a close-up view of everything that took place. It helped that she had great raw material – the 1985–86 tour to the West Indies was one on which just about everything that could go wrong did go wrong, both on and off the field, culminating in Ian Botham’s alleged night-time activities with a former Miss Barbados – but Edmonds brings great intelligence and warmth  to her writing. Apart from when she is writing about Phil. Her most cutting lines are reserved for her husband.

Related Story: ‘Biggest decision of my life’ – Tahir to retire from ODIs after World Cup

In many ways that series was the bridge between the old school and the modern tour. One where the balance shifted from a more leisurely, enjoyable approach where players and reporters rubbed along and what happened on tour stayed on tour, to the present-day professional variety where players are scarcely even aware of what country they are touring and where contact with the media is strictly controlled by tour managers and agents.

Edmonds captures the tensions, the cliques, the sense of drift and the siege mentality perfectly. And for someone who claims not to be that interested in the cricket – the actual games are recorded merely as footnotes – she seems to have a profound understanding of the psychology of the game. She wonders aloud about the psychological pressures each player is under – most writers ignored the impact that the death of his mother just weeks before the tour had on David Gower’s captaincy – and dares to say the unsayable. 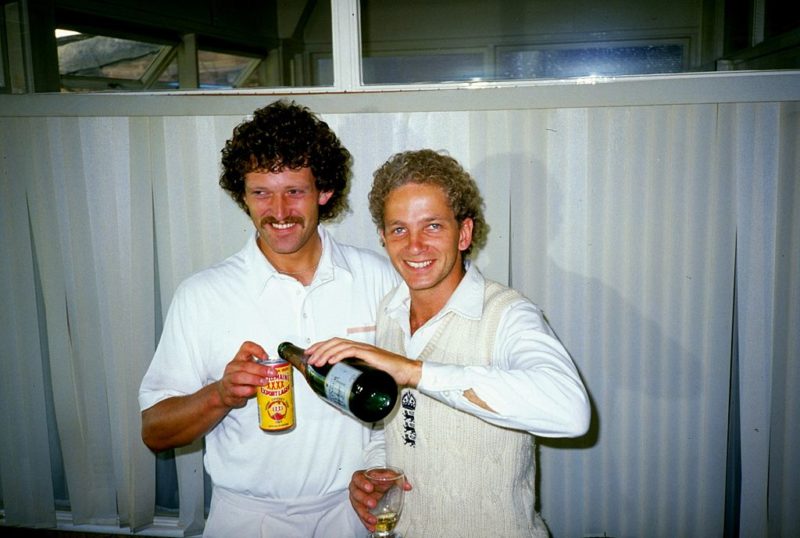 Gower ended his career with 117 Test appearances for England

While the players and management consistently bicker and fret over their preparations, Edmonds calls it as it is. England were being thrashed because they were up against the best cricket team in the world. End of. Best of all, Edmonds appears to love being in the West Indies. She takes time to see different parts of the islands and immerse herself in the culture. Her obvious enjoyment can’t help but rub off on the reader. If you have somehow missed this book, catch up now.

This, then, was how I spent my winter. Not on the tour that was actually taking place, but on ones that I would – for different reasons – liked to have been on. I can’t recommend it too highly as a displacement activity. For this is one of the great gifts of cricket’s literary history. If you don’t like the game you are watching, there’s always plenty more from the past to choose from.

This article appears in issue 21 of The Nightwatchman. Available in print and digital editions.

The Nightwatchman is Wisden’s quarterly. Combining brilliant writing and beautiful design, it is the perfect gift for cricket fans. Take a look at our products and subscription options and for a limited period get 10% off by entering the coupon code NY10 at the checkout*.