In issue five of The Nightwatchman, Nick Albury looks back on the emotional whirlwind that the Ashes brings.

The opening bars of “Love Spreads” shock me awake before I silence the music with my flailing hand. For a moment, I am lost in a warm, dreamy fug that shields me from the day. Suddenly, exhaustion hits me. How many times did she wake me up last night? It isn’t her fault. The eczema rumbles under her skin like a Stone Roses bass line.

Each time she cried, I was there in a flash: one hand absent-mindedly lathering her with cream, the other checking the score of the first winter Ashes Test – my pulse accelerating as the page refreshes. “Bugger it,” I mutter. My wife would be instantly propped on an elbow, her face etched with motherly concern. “What is it? Is she ok?” “Consecutive boundaries for Haddin. We need another wicket.”

She rolls her eyes before she goes back to sleep. The Aussies are 155-6. My mind is churning through the possibilities, as I feel at once awake and alive. Haddin and Johnson are in. “Get one of these,” I tell myself, “And we are into the tail.” I listen carefully. My little girl is fast asleep. I get out of bed and pad silently into the shower.

I drive through the sleeping town with ease, unconsciously negotiating each turn. I am not really here

At 6.50am, always 6.50am, I open the front door and stumble into a dark and dormant world, instinctively cowering under my hoodie as the bitter wind slices through me. At least there is no frost – I am spared having to scrape ice from my car windows. I climb in and put on the heating, then tune it to Test Match Special, motionless, awaiting enlightenment. Aggers is on.

The update? Haddin defends comfortably and it’s the end of the over. So he’s still in. “And Johnson?” I wonder, “Is he still around?” Geoff Boycott recalls the first time he saw Johnson, a few years ago in South Africa when he flayed them for a ton and a 90-run knock in the same match. He should be an all-rounder, says Boycs. He has the talent. I take that as a yes.

I drive through the sleeping town with ease, unconsciously negotiating each turn. I am not really here. I am down under, basking in the heat – the cruel English winter and life’s fripperies pushed momentarily into the shadows.

It feels as though cricket was injected into my veins: running through my bloodstream and taking hold of me in a way no other sport can

Random images play like a reel in my mind: the Barmy Army, singing and smiling; Kevin Pietersen, a moody shadow cast on his face by his floppy sunhat, as he back-steps to the boundary; Alastair Cook at slip, chin in hand, looking perpetually puzzled; and Stuart Broad, light glinting off his flushed and generous forehead as he retreats to his mark.

I recall recent news footage of the England team – fooling around in the nets, as they ready themselves to take on Australia in an unprecedented sixth of 10 Ashes Tests in a calendar year. I am overwhelmed with envy – but in a positive way. No shred of bitterness. How good would that be? How good would that be? 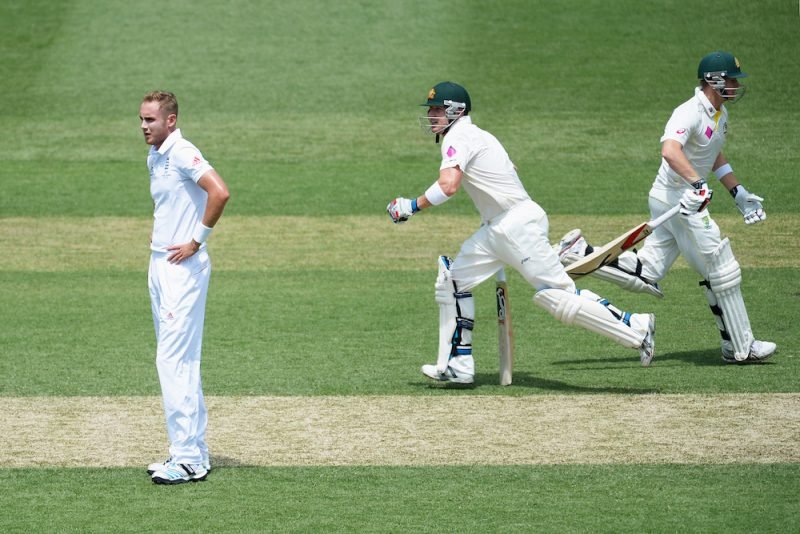 Haddin pulls Broad for four. “Pitch it up,” I shout. “How hard can it be!” 235-6. Why do I bother putting myself through this? And then I remember. It’s because I love it, at least I think I do. Can you love something you are hopelessly addicted to? Does an alcoholic love Tennent’s Super? Do junkies love heroin? It feels as though cricket was injected into my veins: running through my bloodstream and taking hold of me in a way no other sport can. It’s a team game but its intrinsic loneliness tugs at an unsettling vulnerability in my mind.

The traffic thickens as I reach a roundabout at the A5. I stop, pull the handbrake and glance to the right. A youngish girl with blond hair is alone at the wheel, singing away. I’m envious: no TMS for her, it seems. No addiction. No vulnerability. I bet she’s never even heard of Brad Haddin.

The light turns green. As I pull away, I allow my mind to briefly contemplate the day ahead – meetings at 10 and 11am followed by a free afternoon. I can wallow then in my obsession, moving from website to website, taking in the day’s play, as well as musings from those wise old scribes who – with the glorious benefit of hindsight – will insist things turned out exactly as they had imagined.

His usual joie de vivre is absent from his gait

Swann begins a new over – a familiar, piercing shriek fills my cocoon as he appeals for an LBW in vain. Graeme Swann: the wisecracking soul of the dressing room. For the 1000th time during his England career, I think back to my Northants youth: playing for the under 11-, 12- and -13 cricket teams. His brother Alec opening the batting: balanced, elegant and oozing with confidence. Then me at one down: awkward, nervous and crippled by self-doubt.

Eleven young lads yet to grow into themselves – playing with an intensity no one should experience at that age, feeling the laser-sharp gaze of pushy parents from the boundary. Graeme Swann was a year younger than me – supremely gifted but utterly indifferent to the expectations weighing upon him. Unlike Alec, he didn’t care whether he scored nought or 80, or took 0-70 or 6-34. You can be like that, I suppose, if you know you are the chosen one; you strap yourself in and let fate take its course while the rest flounder in your wake.

Swann appears tired, says Michael Vaughan. His usual joie de vivre is absent from his gait. Johnson flogs him for another boundary and Vaughan is telling listeners how tough the schedule is on England’s cricketers. It has been only three months since they last played a Test. Slaves to the central contract; they live out of suitcases, rarely seeing their families as they move from one tour to the next.

I think of my own family: my wife and daughter curled up in bed. I get to see them all the time. I realise Vaughan has struck a chord. But then I am away again: flying first class, staying in five star hotels, visiting exotic cities, enjoying the endless sunshine, and getting paid a fortune to hit a piece of leather around a field. Mumbai, Sydney, Colombo, Cape Town, Bridgetown, any town. How good would that be? How good would that be?

I reach a shallow crest on the A5: the Milton Keynes skyline appears in front of me, illuminated by iridescent yellow pockmarks. The black horizon is now an indifferent blue. It’s 7.28am, and England – from a position of dominance – are now on the rack. Maybe they won’t have it all their own way in this series after all. Two minutes to go until their day ends and mine begins. As usual, they have failed to bowl their quota of overs but – as Jim Maxwell intones in his laidback Aussie drawl – if Anderson delivers this last ball soon, they can fit in one more.

I pull into the empty car park – making a dash for my usual slot near the front door – but make no move to leave the car. I’ll listen until stumps. Cook has wandered over to Anderson. What can they possibly be discussing, asks Maxwell. Nothing, says Vaughan. They are stalling. They just want to get off the field. They don’t want to play anymore today. I feel cheated. They don’t want to play.

The crowd knows it too. The noise builds as Anderson finally approaches the crease, bowling the delivery outside off stump.  Haddin leaves it alone. A moment’s calm, then warm applause from the Aussies as the bails are lifted. Cook and his men have had their way. I turn off the engine and take a deep breath. The real world awaits.

This article appears in issue five of The Nightwatchman. Available in print and digital editions

The Nightwatchman is Wisden’s quarterly. Combining brilliant writing and beautiful design, it is the perfect gift for cricket fans. Take a look at our products and subscription options and for a limited period get 10 per cent off by entering the coupon code NY10 at the checkout*