Bill Lawry was an adhesive opening batsman for Australia throughout the 1960s. After a fine first Ashes tour in 1961, he was named a Wisden Cricketer of the Year.

A comparatively unknown 24-year-old cricketer who came to England with Richie Benaud’s 1961 team made the strongest impact of any post-war Australian batsman on his initial tour. He was Wiliam Morris Lawry, a member of the Northcote Cricket Club in Melbourne and of the Victoria State eleven. As a Test left-handed opener he established himself as successor to Arthur Morris.

It was ironical that this tall, lean young man with the sharp jaw, who stood 6ft 2in, bore the nickname “The Phantom” bestowed upon him when he first joined the Victoria team and his colleagues discovered his youthful addiction to a comic strip character of that name.

As he went from one triumph to another Lawry, with his slight crouch at the wicket, his long reach to kill the spin was very much there in the flesh in the eyes of the England bowlers. 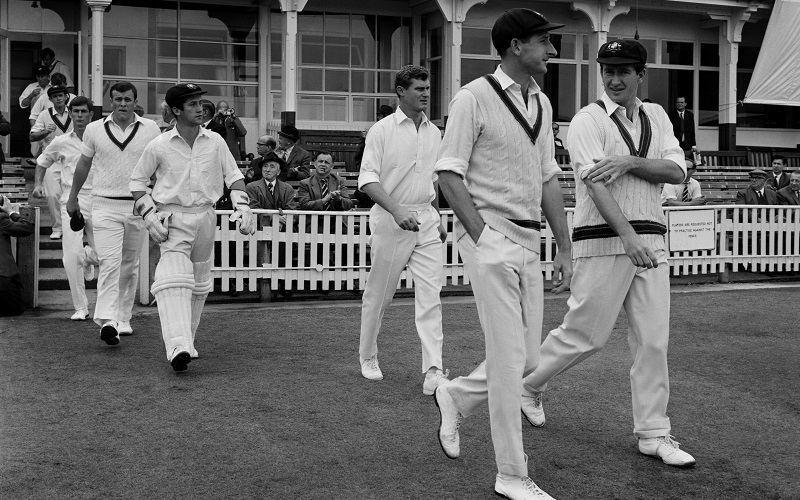 Bill Lawry (second from right) leading his team onto the field in the third Ashes Test at Edgbaston, July 1968

Presenting a really straight bat, he combined a well-organised defence with a satisfying, if not very wide, range of strokes, showing readiness to hit the loose ball and extraordinary facility in placing it.

Admirable composure and power of intense concentration supplemented these assets. He was stout-hearted, stubborn or pugnacious as circumstances prescribed, and had the temperament of being able to carry on unruffled by error.

One of eleven newcomers to England in the Australian party, Lawry topped the batting with 2,019 runs, average 61.18 in first-class matches and 420 runs at 52.50 an innings in the five Tests. Also he hit most centuries, nine. Only Don Bradman, 2,428 runs in 1948, and Neil Harvey, 2,040 in 1953, among Australians also made over two thousand runs in England since the war. 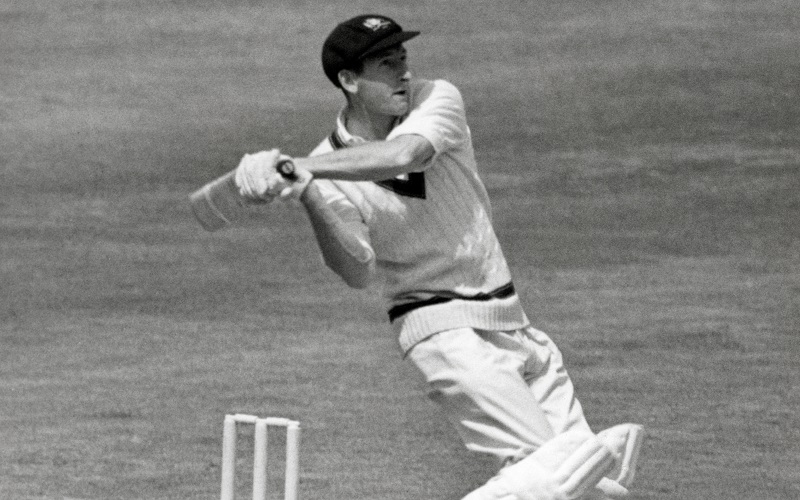 Bill Lawry in action against England during the third Test at Headingley, July 1964

That the summer was mostly fine after the first week did not detract from the left-hander’s glory. He hit a century in each of the two Tests that Australia won: 130 on the exacting ridge at Lord’s and 102 in the Test which decided the Ashes at Old Trafford after 74 in the first innings.

Lawry, the raw recruit, soon adapted himself to English pitches which he found slower than those at home but with more pronounced spin and cut. He had been sent to England as a promising opener – solid and with strokes developing. His sole major achievement had been 266 – after being dropped at 12 – in a punishing innings for Victoria against New South Wales in Sydney shortly before the Australian selectors chose the team for the tour.

Born in the Melbourne suburb of Thornbury on February 11, 1937, Bill Lawry had no family background in big cricket. At the age of nine he took part in his first competition with Thornbury Presbyterian Church team; he spent three years in church cricket and also played for Preston Technical School.

The Australian district clubs set out to catch ’em young and when he was 12 Northcote claimed him in their fourth grade side where he stayed two seasons, then one in the third, one in the second and at 16 he was promoted to the first. Thus he had eight summers in the senior grade before he toured England.

His first-class career had one serious check. A few months before his 19th birthday he made his debut for Victoria, against Western Australia in 1955/56. He appeared in all the Victoria State matches in 1956/57, but was dropped completely in 1957/58 and for half the next season. Restoration came in Victoria’s return game against MCC in 1958/59; he scored 24 and 22 and since then has played continuously.

Lawry acknowledges the help he received from Jack Baggott, coach of the Northcote club whose first eleven he now captains. He greatly admires Australia’s post-war left-handers, Morris and Harvey, although he did not try to copy their methods. Lawry is also a left-hander at winter baseball which has given him a splendid throwing arm. He also finds time to breed racing pigeons.

During the early days of the tour, O’Neill, Harvey and Burge each scored a century for the Australians before Lawry got his first in England at The Oval. It was a dominating innings against Surrey on a Saturday in May; also it was one of the most significant of the whole season. It was a flowering of technique and temperament and it opened many English eyes and many Australian eyes, too.

In four and a half hours, Lawry scored 165 out of 286. He produced powerful drives beautifully placed past cover or mid-off; he hooked hard and he pulled hard. He pounced on anything loose offered by Test spinner, Tony Lock. Denis Compton said he had not seen such ferocious hooking since the days of Bradman. Lawry had arrived.

As at The Oval, he hit a century on his first appearance at Lord’s, 104 against MCC, and was shaping for a second, 84 not out, when the closure was applied. On his Test debut at Edgbaston he made a good impression with a steady innings of 57. Since The Oval it had been obvious that Lawry would open in the Test though it meant splitting and established pair, McDonald and Simpson.

Lawry was Australia’s spinal column in the second Test at Lord’s. This was an indomitable effort of sheer graft under severe pressure with the ball flying about and he was tenacious, painstaking and wonderfully cool. He took bruising blows. True, he made some passes at fiery Trueman and Statham, but he stuck it out for six hours, hitting the loose ball cleanly and placing it well. That innings of 130, his fifth hundred of the tour, gave Lawry one thousand runs inside two months.

After the Old Trafford Test, WE Bowes, a former England pace bowler, wrote that Lawry was one of the best players against fast bowling I have ever seen. In the later stages of the tour some staleness was evident and his batting lacked previous composure and colour, but the fact remained that the tall one’s batting did expand on his baptismal tour.

Returning to his own country, Lawry promptly became the Victoria captain. A popular character, modest, staunch and intelligent, he is a splendid team man.

"Three years was a long cycle to be in that mindset"