Bill O’Reilly, one of Australia’s greatest leg-spinners, made a deep impression on English audiences on the 1934 Ashes tour. The following spring, he was named a Wisden Cricketer of the Year.

William Joseph O’Reilly, the New South Wales school teacher whose rise to fame has been meteoric was born on December 20 in 1905 at White Cliffs, New South Wales. There is not the slightest question that O’Reilly and Clarrie Grimmett, during the tour in England in 1934, did as much as any two others in the Australian team to win back the Ashes for Australia, and of the two O’Reilly probably caused more trepidation to English batsmen than even Grimmett.

Above everything else these two bowlers, so different in their methods, taught our cricketers in this country the value of length. They had their occasions when they erred in this particular phase, but, day in and day out, no two men during last summer bowled with such consistent accuracy.

Until he was 18 years of age, O’Reilly took part in upcountry cricket in the Goulburn district, playing in the same competition as Bradman. He was always a bowler and owed little or nothing to any special coaching. Actually he did not have much cricket at school but on going to Sydney he played with other juniors on Saturday mornings in Moor Park, just outside the Sydney Cricket Ground. Not until 1926 did he appear in grade cricket for North Sydney but in December of that year he was picked by the selectors for practice on the Sydney Cricket Ground.

However, in 1926 and the two following seasons he transferred his activities to the country, appearing for Griffiths, Rylstone and Kandos. Returning to Sydney at the end of the 1931 season he secured a regular position, as a member of North Sydney, in the State team. To revert to the time he was at school he tried to bowl fast for a little while but finding he was erratic changed to medium pace again when he realised the truth of his sports master’s words that the main thing in bowling was length. Later on when bowling at the nets at Sydney he was advised to alter his grip of the ball but decided not to do so and now this is exactly the same as it always was – the first two fingers round the ball and the others folded on to the palm of his hand. 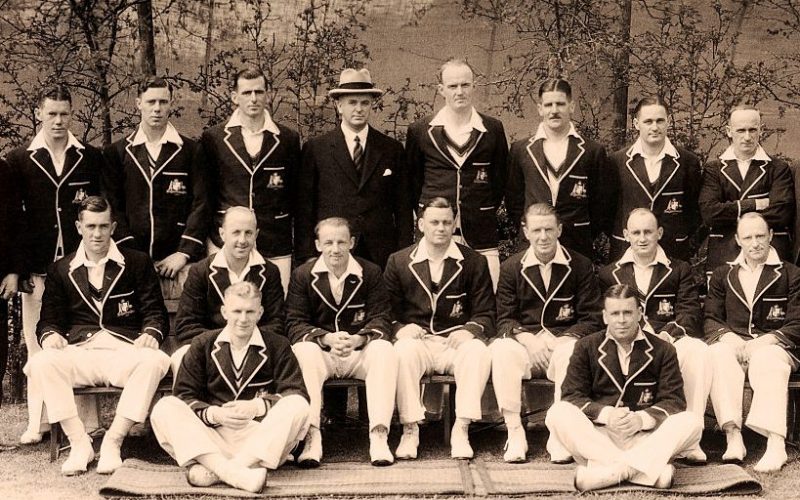 The Australian team in England, circa 1934. O’Reilly is fifth from left in the back row

O’Reilly’s career so far in first-class and Test cricket is remarkably short. He played for his State against Queensland and New Zealand in 1927-28 meeting with no pronounced success, nothing more was heard of him until the Australian season of 1931-32 when the South Africans were on tour in Australia. In that season he played in the last five Sheffield Shield matches for New South Wales, taking 25 wickets at an average cost of 21 runs and so much was thought of him that he appeared in the fourth and fifth Test matches against South Africa, coming out with a record in representative engagements of seven wickets at a cost of over 26 runs each.

Although far from phenomenal, his success was such as to open the eyes of the authorities in Australia to the fact that they had found a bowler of great possibilities and, when the MCC team went to Australia in the winter of 1932-33 O’Reilly jumped right into the front rank of Test match cricketers. He finished that season second to Wall in the bowling averages of the five Test matches with a record of 27 wickets for rather less than 27 runs apiece, and it was the general opinion of the MCC team that he was the most difficult man they had met.

Indeed, old judges of the game in Australia went so far as to say that of his type he was the best to play for their country since the days of George Giffen and Hugh Trumble. For New South Wales in that season, he headed the averages with 14.19 for 31 wickets, having a very big hand in helping New South Wales to carry off the Sheffield Shield. He obtained six wickets for 36 runs in the second innings against Queensland while in the season of 1933-34 his best performances were 13 wickets for 111 runs against Queensland and nine wickets for 50 in the second innings of Victoria.

O’Reilly came to England last summer, therefore, with his reputation already made and, in the course of a busy tour, he, if anything, added to it. He headed the Australia averages for the five Test matches with 28 wickets for just under 25 runs each and he was also top of the Australian bowling averages for first-class matches with the splendid record of 109 wickets at a cost of just over 17 runs each. 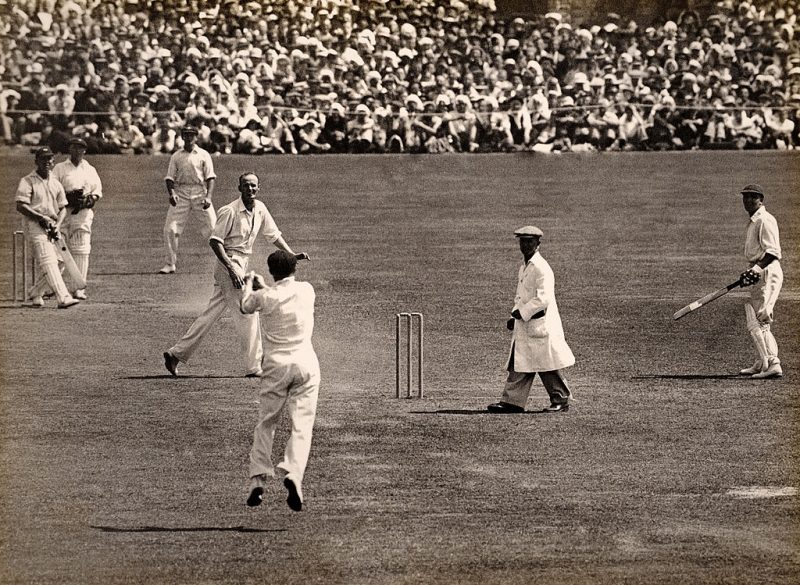 Leyland is captured off the bowling of O’Reilly, during the Old Trafford Test in 1934

He quickly showed his capabilities by dismissing eleven Leicestershire batsmen for 79 runs – seven in the first innings for 39 – and a little later against Essex he took nine wickets. These performances were no mere flashes in the pan for he enjoyed a veritable triumph at Nottingham in the first Test match by dismissing 11 batsmen, seven in the second innings for 54 runs. Later at Taunton he took nine wickets in Somerset’s first innings for 38 runs.

Although getting rid of only one England batsman in the Test match at Lord’s, he sent back seven at Manchester in England’s first innings but had 189 runs hit from him. Still, as he bowled 59 overs that was far from being the moderate performance it looked on paper. No one who saw the game will ever forget the dismay he caused when with the first, second and fourth balls of one over, he disposed of Walters, Wyatt and Hammond, only four runs being hit from him during this time. Eleven wickets for 78 runs against Glamorgan was his next notable feat and really his last big performance of the season, because in the Test matches at Leeds and the Oval, although always remaining a dangerous man, he met with no outstanding reward.

Standing 6ft 2in in height, O’Reilly did not seem to make full use of his stature owing to his stoop at the moment of delivery. One hesitates to say, however, if this detracted very much from his effectiveness for he was able to vary his flight and pace without any apparent change of action. As already indicated he relied primarily upon supreme accuracy of length but in addition to his steadiness in this respect he possessed with his big hands and long, powerful fingers the ability to make the ball turn quickly either way.

Related Story: Victor Trumper ‘put into the shade’ all Australian batsmen in England before him

His leg-break – of that superior quality which causes the ball to turn just sufficiently to beat the bat and not the wicket as well – was, if anything, slightly quicker than his off-break but, to the latter delivery he could impart such spin that often on a good pitch he caused the ball to lift so that a batsman, playing a defensive stroke, stood in danger of being caught close in at forward short-leg where O’Reilly always had a man posted.

Altogether he was a most interesting study as a bowler and not the least important feature of his success consisted in the fact that, having taken a wicket, he would on most occasions at once deliver a ball of similar deadliness to the new batsman. Of this, Wyatt at Manchester had very convincing proof. Although he bowled right-hand medium pace, O’Reilly was a left-handed batsman. He had no pretensions to grace of style or any particular merit, but he could hit tremendously hard and was always a menace to tired bowlers.