After top-scoring for Australia in their victorious 1993 Ashes campaign, David Boon was named as one of the five Wisden Cricketers of the Year in 1994.

Two years ago, the pavilion at the ground in Launceston, Tasmania, was renamed “The David Boon Stand”. Admittedly Launceston is Boon’s adoring home town but, even so, having a grandstand named after you when you are only 31 years old and in the middle of a Test career is proof that you have become a living legend.

Now, two years and hundreds of runs later, Boon is rivalling Allan Border as the most respected and admired cricketer in Australia. At big matches now, banners carry, the simplest of messages: “Boonie” or, at their most verbose, “Boon – dead-set legend”. His recently published autobiography is a best-seller and crowds have flocked to meet Boon at book-signings around the nation.

Boon had been Australia’s leading batsman for some time before the 1993 Ashes tour, but it was his performances on that, his third, tour of England that elevated him to the stature of a diminutive but formidable national treasure. In ten Test innings in England in 1993 Boon made 555 runs at an average of 69.37. Importantly, he finally achieved an ambition by making his first Test century in England, an undefeated 164 at Lord’s in the Second Test. This innings had followed a frustrating 93 in the First Test at Old Trafford, but Boon made up for that disappointment by following his Lord’s century with another in the Third Test and another in the Fourth. 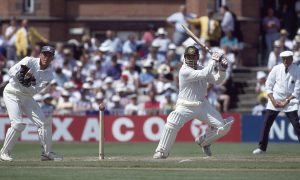 After the Ashes tour, Boon stood in fifth position on the list of all-time Test run-makers for Australia with 5,869 runs at 45.49 with 17 centuries. Against South Africa at the end of December he reached 1,241 Test runs in a calendar year, more than any Australian has scored except Bobby Simpson, and passed Neil Harvey’s aggregate of 6,149 to lie behind only Border, Greg Chappell and Sir Donald Bradman in the all-time Australian Test scoring list. If we can judge a batsman by the company he keeps in the record books, Boon’s reputation is assured.

DAVID CLARENCE BOON was born in Launceston on December 29 1960. His father Clarrie, who died three months before the tour began, was a respected sports administrator and a strong supporter of his son’s career. His mother, Lesley, played hockey for Australia. Boon was educated at Launceston Grammar School where he excelled at cricket, Australian football and swimming. His cricket career gained impetus when the Lancashire professional Jack Simmons was coaching in Launceston and predicted the lad would play for Australia. Simmons was captaining Tasmania when Boon began his first-class career as a 17-year-old. Years later Boon formally recognised his debt to Simmons by naming his son after him. Boon’s achievement in becoming a fine Test player from a state which at that stage was still to enter the Sheffield Shield is strong evidence of his singular determination.

Boon’s efforts on his three tours to England tell the story of his career. In 1985 he seemed anchored to the crease by indecision against the spin of John Emburey, his seven somewhat embarrassing innings producing only 124 runs at 17.71. In 1989, he made a solid 442 runs at 55.25, yet he never quite gorged himself as Mark Taylor and Steve Waugh did. In 1993 Boon was the most assured batsman in the Australian team, feasting remorselessly on wayward England bowling. 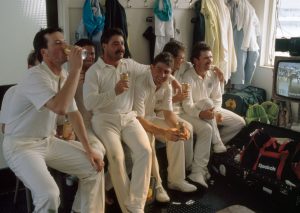 The most striking features of Boon’s batting in England in 1993 were his concentration and precise shot selection. It was as if he knew that every over England’s bowlers would present him with a short ball to cut for four or a half volley to clip away to the mid-wicket rope. His method was to defend patiently against any reasonable delivery, then to despatch with minimal risk the inevitable bad ball. It was a simple but ruthlessly effective strategy. Boon now knows his strengths and weaknesses as well as Border knows his. Young batsmen like Slater, Hayden and Martyn talk of the Bible according to Boon.

“I suppose the difference between my batting in 1989 and 1993 was that I converted 50s and 60s into hundreds in ’93,” Boon says. “I think my mental approach is different these days. I’m a lot harder now. Every innings really matters. My attitude has changed a lot in those four years. There’s a definite progression there.”

Off the field, Boon is a quiet character who does not waste words. However, he possesses a dry Australian wit and often reveals a mischievous glint in the eye. On the field, either at short leg where he is brilliant or at the batting crease, he is the rock on which Australia have built their recent good form. Border, one of his staunchest admirers, once said Boon had a heart to match that of Phar Lap, the great Australian racehorse. In Australian sport, there are few higher compliments.

First published in the 1994 Wisden Almanack