Dudley Nourse was one of the giants of South African cricket and one of the finest batsmen in the world in the years after the Second World War. He was named a Wisden Cricketer of the Year in 1948.

In any discussion on South African cricket, the name Nourse is just as essential a feature as are those of WG Grace and JB Hobbs to an English review and DG Bradman to a history of Australia. For nearly 20 years, AD Nourse provided the backbone of the South African side with consistent left-hand batting, and his 45 Test appearances is still a record for the country. The G.O.M., as he became known, passed from the international stage in 1924, but only 11 years elapsed before his son, Arthur Dudley Nourse, took guard against England at Nottingham, and so began a Test career even more illustrious than that of old Dave.

The records show that Nourse senior made one century in Tests, whereas to the end of the 1947 season Dudley reached his hundred five times in 19 games, for which he possessed an average of 55.41. In contrast to his unfortunate experiences in England in 1935, Nourse last summer gave of his best in the Tests, when his aggregate of 621 runs (average 69.00) was the highest ever by a South African cricketer against England and in this series was beaten only by Compton’s 75.3. In seven of his nine Test innings Nourse passed 50, twice he reached a century, and at Nottingham he took part with Melville in the third-wicket Test record stand of 319.

It would be a natural assumption to suppose that Dudley Nourse enjoyed the advantage of coaching and advice from his father in his young days, but Dudley is a completely self-taught cricketer.

Nourse is far from record-conscious, yet he feels justifiable pride in the best score for South Africa – his 231 against an Australian attack containing O’Reilly, Grimmett, Fleetwood-Smith and McCormick in the 1935 Johannesburg Test. A curious point was that Nourse then staved off almost certain defeat for his country, just as did his father with an innings of 111 against Australia 14 years before on the same ground.

It would be a natural assumption to suppose that Dudley Nourse enjoyed the advantage of coaching and advice from his father in his young days, but Dudley is a completely self-taught cricketer. Incidentally, the second Christian name was given him because of a wish expressed by the Earl of Dudley, Governor of South Australia, when Dave made 211 at Adelaide a few hours before receiving the cable announcing his son’s birth on November 12, 1910. 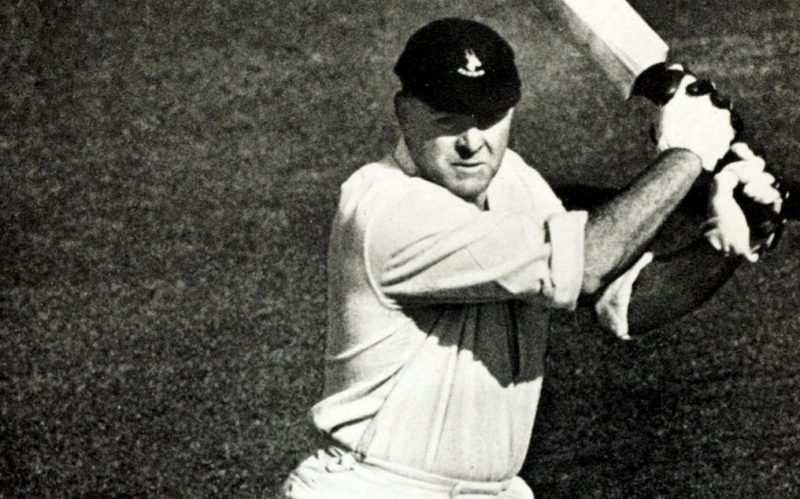 His father decreed that Dudley must learn cricket the hard way, as he himself did, and early experience of street and park pitches, together with his inherited skill, character and love for the game, undoubtedly helped Nourse to become such a resolute batsman. Nourse began making big scores before he reached his teens and, after his photograph appeared in a newspaper when he hit a century at 12, he was invited to coaching classes held by Alec Kennedy, the former Hampshire professional.

The shy young lad was not at his ease there and attended only twice. Soon afterwards he scored 100 in Durban while his father played in the next field, and Dudley reached 22 years of age before Dave first saw him bat. The circumstances were novel. Dudley received his first chance for Natal in a friendly game at Durban against Western Province, for whom his 54-year-old father was then playing. To Dudley’s great delight he made 105, including some runs off his father’s bowling. Naturally the G.O.M. was first to offer congratulations, since when the two men have often recalled to each other that memorable day. 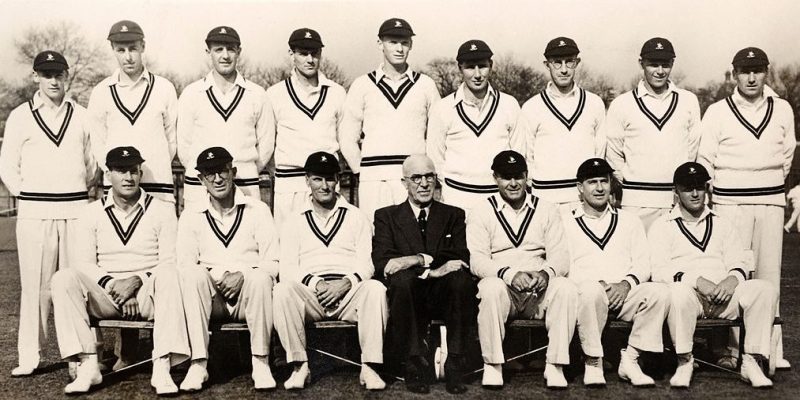 South African team during their tour to England in 1951, led by Dudley Nourse (seated third from left)

Three years later, 1935, Dudley came to England with H. F. Wade’s team. He got 736 runs in May, with centuries in three successive innings, including 147 and 108 not out against Surrey, and, though he achieved little in the Tests, his season’s aggregate of 1,861 was second only to that of E. A. Rowan – 2,268. Next winter, Nourse scored 30 and 91 in the First Test against Australia, failed to obtain a run in the first innings of the Second Test at Johannesburg, then on Boxing Day pulled South Africa through a second innings crisis with his 231, which occupied less than five hours and included 35 fours. Against W. R. Hammond’s team in 1938-39 he hit two Test centuries, and in the endurance Test at Durban he abandoned personal inclination by taking six hours over 103.

When in the Middle East in 1945 Nourse became seriously ill with pneumonia and, after being on the danger list for a week, was sent home. During convalescence he put on a good deal of weight, and, on resuming cricket, took a long time to regain his former masterly footwork and exact timing, but he played many grand Test innings in 1947. He battled his way through early difficulties at Nottingham, where he scored 149, and at The Oval his quick-fire 97 in the second innings, at a time when the odds were heavily in favour of England, nearly opened the way for a sensational victory.

Nourse is naturally bold and aggressive, and there is a rhythm in his movements reminiscent of his father.

Yet nothing last summer was more meritorious than his 115 on a bad wicket in the Second Test at Manchester. Though the ball jumped and turned awkwardly from the drying turf, Nourse made the England attack look mediocre as, instead of watchful defence, he set about knocking the bowlers off their length. Nourse reached 50 in 75 minutes, and after lunch sped to his 100 in 35 more minutes, his powerful hits including two sixes and 13 fours. In face of this punishment Yardley was compelled to take off his slow bowlers and place a defensive field – on a bowler’s wicket.

That was Nourse at his best. This stocky batsman with broad shoulders and blacksmith forearms seldom goes right forward except when moving out to drive the slow bowlers; off his back foot he hits exceedingly hard, particularly when hooking, driving to the off or cutting square. In executing these he strikes as with a bludgeon. Nourse is naturally bold and aggressive, and there is a rhythm in his movements reminiscent of his father. As with most aggressive batsmen, he is sometimes an uncertain starter and a shock fast bowler is liable to dismiss him before he can settle down, but once set all bowling seems to come alike to him.

Strangely, his two highest innings in England have been against Warwickshire at Birmingham, 160 in 1935 and 205 in 1947, both times not out. A born ball-player, there are few better fieldsmen or safer catchers anywhere in cricket, and he became one of his country’s leading footballers and baseball experts. His experience as captain of Umbilo, Durban, since he was 21 and of Natal in recent years proved of value when, as vice-captain of the 1947 touring side, he became leader in Melville’s absence. In captaincy he displayed the same kindly courtesy which characterised the whole party.

Dudley Nourse toured England again in 1951, scoring a double century at Trent Bridge. But he retired at the end of that tour having scored 2,960 runs at 53.81 in 34 Tests.